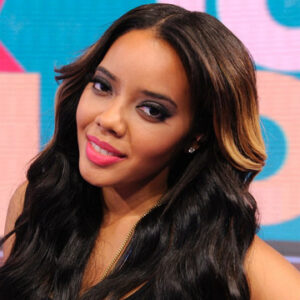 Angela Simmons is a notable reality TV celebrity, fashion designer, and successful entrepreneur. She is the daughter of famed rapper Joseph “Reverend Run” Simmons. ‘Run’s House’ and ‘Daddy’s Girls’ were two of the most popular MTV series at the time. Her older sister, Vanessa, and she released the “Cake Collection,” a pastry-inspired footwear collection for her family’s Run Athletics company on March 23, 2007. She and Olympian athlete Sanya Richards-Ross started their own apparel line, Foofi and Bella, on December 17, 2015. She is also the founder of the ANGELA I AM lifestyle brand. ‘Growing Up Hip Hop,’ a reality TV show she produced and starred in, premiered in 2016. Angela Simmons has appeared on talk shows such as ‘The Wendy Williams Show,’ ‘Entertainment Tonight,’ ‘Access Hollywood,’ and ‘Good Day New York,’ among others. ‘Kontrol,’ ‘Honey,’ ‘PYNK,’ ‘JET,’ ‘Rolling Out,’ and ‘Sheen’ have all featured her on the covers of magazines.

Angela Simmons, who was born into hip-first hop’s family, was no stranger to the spotlight even before she became a successful entrepreneur. In 2005, she began appearing on her family’s reality television series ‘Run’s House,’ which gave her unprecedented notoriety.

In 2006, she took over as editor of the ‘Angela’s Rundown’ mini-magazine, which was released with the ‘Word Up!’ magazine. It was an adolescent fashion magazine that featured stories on fashion, music, and other themes. It also included in-depth interviews with celebrities who are known for being “ugly ducklings.” She remained with the publication until April 2012, when ‘Word Up!’ ceased publication. Angela, who had studied fashion in college, and her older sister Vanessa started the ‘Pastry Footwear’ footwear business in 2007.

While her business endeavors would eventually take precedence, she returned to reality television in 2009 to star in ‘Daddy’s Girls’ with her older sister. She later established her own fashion accessory business and ecommerce platforms. She proceeded to appear on reality shows and television series such as ‘Fashion News Live’ (2008-2014), ‘Growing Up Hip Hop’ (2016), and ‘The Real’ (2016).

Angela Simmons has already built her own brand with her fashion items and acting endeavors, stepping out from behind her renowned father’s shadow. While she utilizes her reality TV platform to advertise her products on occasion, she also uses her celebrity status to raise awareness for numerous charity issues such as animal welfare and kid education and well-being.

Angela Simmons, who was inspired to become a vegetarian by her uncle Russell Simmons, is now a spokesman for PETA, asking her followers not just to stop eating meat, but also to stop consuming animal-derived products. In fact, Foofi and Bella, her own apparel company, provides an alternative to fur products. She is also a Children’s Miracle Network ambassador, assisting in the uplift and empowerment of young people. Furthermore, AngelaIAM.com, her official website, gives a forum for budding fashion artists to express their ideas and inspires them to establish their own enterprises.

Between 2009 and 2010, Angela Simmons was in a relationship with rapper Skillz, however many of her followers were outraged because she was dating someone of a different race. She even issued a statement on the subject. She later began dating Romeo Miller and co-starred in the reality show ‘Growing Up Hip Hop,’ for which she also served as executive producer. Even though they remained friends, she eventually emotionally distanced herself from him.

She had a relationship with Sutton Tennyson, it was later revealed. She has kept her relationship private, even avoiding announcing her fiancé’s name when she showed off her engagement ring to her social media followers in April 2016. It’s been suggested that she kept the connection hidden because of his criminal past. Sutton Joseph Tennyson, their baby boy, was born in September of that year.

Miley was adopted by her parents after Victoria died due to a birth condition shortly after she was born. She went to High School of Fashion Industries and subsequently Fashion Institute of Technology, but left after a year to pursue a business career. She is the daughter of a pious Christian family.

Angela Simmons has a $7 million net worth as a businesswoman and reality TV star in the United States. Angela Simmons’ net worth is the result of her co-ownership of Pastry Footwear with her sister Vanessa Simmons. Rev Run’s daughter, she is also a hip-hop legend.