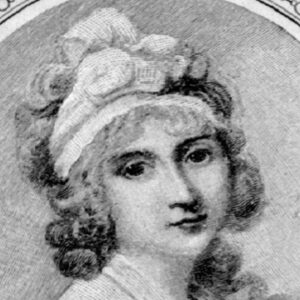 During the American Revolution, Angelica Schuyler Church was a prominent member of the social elite. She is well renowned for her attractive disposition, which has earned her the titles of “muse,” “confidante,” and “heart thief.” She connected with a number of revolutionary figures throughout her time as the daughter of Continental Army General Philip Schuyler, both in America and in Europe, where she spent a considerable part of her life. Edmund Burke, John Trumbull, Richard and Maria Cosway, Benjamin Franklin, Thomas Jefferson, and Marquis de Lafayette were among the artists and statesmen with whom she formed lasting ties. Her flirty ties with Thomas Jefferson and her brother-in-law, Alexander Hamilton, were the focus of interest after her private communication with her acquaintances was made public in the late twentieth century. Some have also claimed that she tried to sway the men in her life on political concerns of the time. In the Broadway musical ‘Hamilton,’ she is presented as sassy, clever, and flirty, albeit with poetic license, in her relationship with her brother-in-law.

Philip John Schuyler and Catharine Van Rensselaer Schuyler had Angelica Schuyler Church on February 20, 1756, in Albany, New York. Her father served in the Continental Army as a Major General and adviser to General Rochambeau.

Both of her parents were descended from powerful third-generation Dutch families in the United States. Her paternal great grandfather was a landowner and Albany Mayor, while her mother was a descendent of Kiliaen van Rensselaer, one of New Netherlands’ founders.

She was the eldest of fifteen children born to her parents, eight of whom lived to adulthood. She grew raised on her father’s estate in Saratoga, but was exposed to the progressive culture of New York City during her childhood, where she spent a lot of time.

She grew up seeing the political turbulence as the daughter of a general during the American Revolution. She also got the chance to meet notable revolutionaries in the Schuyler home, which hosted many of the war conferences.

At a military council convened at her father’s house in 1777, Angelica Schuyler met John Barker Church, an English born industrialist and Continental Army supplier during the American Revolution. While some speculated that he fled to America to avoid creditors after his company went bankrupt in August 1774, other reports claim that he killed someone in a duel before leaving Europe.

Despite the fact that her father would not approve of the relationship due to Barker’s shady past, the two became romantically linked. They married on the spur of the moment at her grandfather’s house and then moved to Boston.
As one of the three commissioners selected by the Continental Congress, her husband made successful investments in banks and shipping firms. She moved to Paris with her husband and two children after the war ended in 1783, when her husband became a United States envoy to the French government.

She attracted everyone wherever she went for an extended period of time, thanks to her enthusiastic demeanor. She knew visionaries like Benjamin Franklin, the US Ambassador to France, his successor Thomas Jefferson, and the French nobleman Marquis de Lafayette during her time in France.

Angelica Schuyler Church and her family visited New York briefly in 1785 before returning to Europe and settling in Sackville Street, London. Because of her husband’s business dealings, she had to deal with diplomats as well as artists, which allowed her to form relations with people like William Pitt the Younger, Edmund Burke, John Trumbull, Richard and Maria Cosway.

She became a glamorous member of society, hosting balls for the Prince of Wales and cultivating strong relationships with Whig party leader Charles James Fox and writer Richard Brinsley Sheridan. She was also known for her intelligence and was regarded as a confidante by many men and women of the day, who corresponded with her even after she returned to America.

She was invited to President George Washington’s inauguration in 1789 as a result of her father’s services to the military effort. Her father, who was elected to the Continental Congress in 1775, was elected to the First United States Congress as a Senator from New York in July 1789.

She and her family returned to America in May 1797, settling in western New York, where her husband was allotted 100,000 acres of land as recompense for his war supplies. He eventually went on to become a director of the Manhattan Company and the Bank of North America. Achievements & Awards

Angelica Schuyler Church and her husband, John Barker Church, had eight children. Philip Schuyler Church, their eldest son, was essential in selecting the precise acreage donated to the family along the Genesee River for their estate, which he named the settlement ‘Angelica’ after his mother. Built in 1804, the family mansion, ‘Belvidere,’ is now part of the town of Angelica in New York.

In 1780, Alexander Hamilton married her sister Elizabeth Schuyler, and the two in-laws had a close relationship. Angelica is a key character in Lin-Manuel Miranda’s Tony-winning Broadway musical “Hamilton.” Her persona is based on Ron Chernow’s Hamilton biography as well as her correspondence to him, and depicts her as a clever and bright woman.

During her visit in Paris in 1787, she met Thomas Jefferson through a common friend, Maria Cosway. Her ties with Jefferson and Cosway lasted a lifetime, and their correspondence is preserved in the Church Archive’s letters. One of Jefferson’s letters is famous for a sexually heated passage from a popular novel that he alludes to.

She died on March 13, 1814, at the age of 58, and was buried beside the graves of her sister and brother-in-law in Trinity Churchyard in lower Manhattan, as she had requested. Her husband returned to England after she died, where he died in 1818.

Angelica Schuyler Church was known as “America’s first heartthrob” and has been dubbed “Muse, Confidante, and Heart Thief.” She has a town and a village named after her.