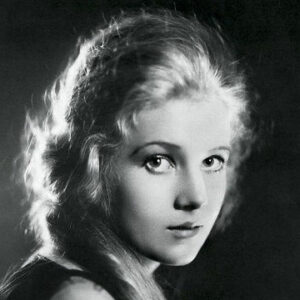 Ann Harding was a stage and movie star in the United States. During the 1920s and 1930s, she was very popular because of the smart and aristocratic women she played in plays and movies. She was short and had long blonde hair that she kept in a bun at the back of her neck. After she moved from Broadway to Hollywood to act in movies, she became a very popular actress because there weren’t many beautiful actresses in Hollywood who could also say their lines perfectly on camera. She was nominated for an Oscar for “Best Actress” in 1930 for the lead role she played in the play “Holiday,” but she did not win. Because her parents were in the army, she had to move around with them between Army posts in Illinois, Kentucky, Havana, Cuba, and New Jersey. Before she turned 13, she went to 13 different schools during this time. When her family finally moved to New Jersey, she was almost done with college and had to start looking for work to help support her family. When she became a professional actress, her family, especially her father, though it was a bad idea, but she stuck to her plan to become an actress.

Dorothy Walton Gatley was born on August 7, 1902, at Fort Sam Houston in San Antonio, Texas, United States.
Her father, General George G. Gatley, was in the army for his whole life, and her mother, Elizabeth “Bessie” Crabb, was a nurse. Edith was the name of her older sister.

After moving to East Orange, New Jersey, she went to and graduated from “East Orange High School.”
She took one year of drama classes at the “Baldwin School” in Byrn Mawr, Pennsylvania. While she was in school there, she played Macduff in “Macbeth,” and Cornelia Otis Skinner played Lady Macbeth.

Ann Harding’s first job was as a clerk at the Metropolitan Life Insurance Company. She couldn’t go to college because she didn’t have enough money. She also worked at the “Famous Players Lasky” film company as a scriptwriter and a reader.

She was in 10 plays in the 1920s, including “Thoroughbreds,” “Stolen Fruit,” “A Woman Disputed,” and “Taming of the Shrew.”
In 1927, she played the lead role in the show “The Trial of Mary Dugan,” which was very successful. The show ran 437 times, and then she took it around the country.

She signed a contract with Pathe Studios, which later became part of RKO Studios, and moved to Hollywood in 1929 to work in movies.
“Paris Bound,” which came out in 1929, was her first movie in Hollywood. She acted with Ronald Coleman in the movie “Condemned” later that same year, and she kept doing movies for the next few years.

She played opposite Harry Bannister in “Her Private Affair” in 1929, and they got married the same year. They also played opposite each other in “The Golden Girl of the West” in 1930.

Philip Barry’s 1930 play “Holiday” was made into a movie, for which Ann was nominated for an Oscar in the “Best Actress” category.

“Peter Ibbetson” with Gary Cooper in 1935 and “Love From a Stranger” with Basil Rathbone and “A Night of Terror” from Britain in 1937 were two of her best movies.

In 1937, she took a break from acting after a bitter court battle with her ex-husband over who would have custody of their daughter. By this time, she was tired of Hollywood and all the things that went on there, and she was sad that she had to work for “RKO Pathe Studios.”

In 1942, her second husband’s job took her back to Hollywood, where she acted in the movies “Mission to Moscow,” “North Star,” and “Eyes in the Night.”

She took a three-year break, and when she returned to Broadway in 1949, she played the lead role in the comedy “Goodbye, My Fancy.”
She went back to acting in movies in 1950’s “Two Weeks with Love” and 1951’s “The Unknown Man.”

She took another break of about five years, and when she returned to movies in 1950, she played Mrs. Oliver Wendell Holmes in “The Magnificent Yankee” with Louis Calhern. She was in two more movies in 1956: “Strange Intruder” and “I’ve Loved Before.”

In 1956’s “The Man in the Gray Flannel Suit,” she played Frederic March’s wife. It was her last time on the big screen.

Ann has worked on both the big screen and the stage. In 1960, she was in a TV show with Beulah Bondi and Dorothy Gish that was based on Paul Osborne’s “Morning’s at Seven.”

Ann Harding was given two stars on the “Hollywood Walk of Fame” and one star on the “Hollywood Boulevard” for her work in movies and television, respectively.
She was nominated for an Oscar in the “Best Actress” category for the movie “Holiday.”

Ann Harding died on September 1, 1981, in Sherman Oaks, California. She had been sick for a long time.

Ann is one of the wealthiest movie stars and is on the list of the most popular movie stars. Wikipedia, Forbes, and Business Insider all say that Ann Harding has a net worth of about $1.5 million.

Ann Harding is said to have said, “We’ll do theater even if we have to do it in the hedgerows,” which is how the “Hedgerow Theater” got its name.