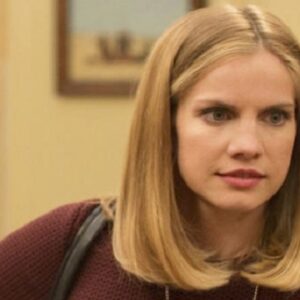 Anna Chlumsky is an award-winning American actress who rose to prominence as a child performer in the films “My Girl” and “My Girl 2.” With prominent parts in films like ‘Trading Mom’ and ‘Gold Diggers: The Secret of Bear Mountain,’ she continued to wow audiences. Early in her career, her performance in these films earned her a number of significant accolades. During her high school years, the girl, who often missed her classmates back at school during film shoots, began to feel alienated from the entertainment industry. She began to lose interest in performing and instead concentrated on her studies. She wanted to be a culinary writer, but the best she could get was a position as a fact-checker for Zagat restaurant recommendations. Her second job as an editing assistant at HarperCollins made her sad as well. She made the decision to return to acting and, on the recommendation of her agency, began anew by taking acting lessons to hone her talents. She landed the role of Liza in ‘In the Loop’ shortly after and began appearing in Off Broadway shows. While she often wonders how things would have turned out differently if she hadn’t taken a hiatus from acting, she is glad she did.

Anna Chlumsky was born in Chicago, Illinois, on December 3, 1980, to Nancy and Frank Chlumsky, Jr. Her father is a chef, while her mother worked as a flight attendant in the past. Her parents are also talented musicians; her mother is a singer and actor, while her father is a saxophonist.

At the age of ten months, she was cast as a child model for Marshall Field’s advertisements. She was reared by her single mother after her parents divorced when she was two years old.

At the age of ten months, she was cast as a child model for Marshall Field’s advertisements. She was reared by her single mother after her parents divorced when she was two years old.

Anna Chlumsky began her career as a child model at a young age, and during the next 6-7 years, she appeared in different commercial campaigns. Her big-screen debut, however, came in 1989, when she earned a small part in the film ‘Uncle Buck.’

In 1991, she became famous for her role as Vada Sultenfuss in the film ‘My Girl,’ in which she played the death-obsessed daughter of a widower Pennsylvania mortician. The film was a hit, and she returned her role as the 13-year-old protagonist in the sequel, ‘My Girl 2’, released in 1994.

Chlumsky landed main roles in ‘Trading Mom’ and ‘Gold Diggers: The Secret of Bear Mountain,’ after being lauded for her earlier work. Despite the fact that the picture received mixed reviews, her performance was acclaimed once again.

She appeared in two made-for-television films in 1997: “A Child’s Wish” and “Miracle in the Woods.” In the previous film, she portrayed a terminally ill 16-year-old girl. She made cameo roles in two television drama series the next year, ‘Cupid’ and ‘Early Edition,’ after which she took a break from acting.

Return to the Stage

Anna Chlumsky sought for different job options after college, including working in the publishing industry. She quickly realized, however, that she was dissatisfied with her 9-to-5 work and regained her passion for acting.

While she had a natural talent for acting as a child, her agency recommended that she pursue professional instruction. She enrolled in the Atlantic Acting School in Manhattan for a year to learn acting.

With a main role in the 2005 short film ‘Wait,’ she returned to acting. She went on to star in films like ‘Blood Car’ and ‘Eavesdrop,’ as well as television shows like ’30 Rock’ and ‘Law & Order.’

In 2009, she had her breakout performance in the satirical black comedy film ‘In the Loop,’ a spin-off of the BBC television series ‘The Thick of It.’ The film was well-received by critics, and it was nominated for an Academy Award in 2010. This was the first film that brought her widespread attention after ‘My Girl.’

In 2009, she acted in the television movies ‘House Rules’ and ’12 Men of Christmas,’ as well as two additional feature films, ‘The Good Guy’ and ‘My Sweet Misery.’ She also appeared in four episodes of the resurrected ABC TV series ‘Cupid’ that year.

She continued to appear in films over the years, the most recent of which was the 2015 film ‘The End of the Tour.’ She has had more success on television, gaining a leading part in the political satire ‘Veep’ in 2012. The hit show was recently renewed for a sixth season, which will premiere in April 2017.

In 2012, she made guest appearances on the shows ‘Army Wives’ and ‘Law & Order: Special Victims Unit,’ among others. She also landed a recurring part as Miriam Lass, an FBI trainee in the television series ‘Hannibal.’

Major Works’ ‘My Girl’ was a movie office triumph and earned mixed to positive reviews from reviewers. Anna Chlumsky was commended for portraying “the difficult puberty of an 11-year-old child.”

Critics have praised her performance of Amy Brookheimer, the Vice President’s chief of staff, in ‘Veep,’ the political satirical comedy television series, in the second part of her acting career.

The sitcom, which earned mostly excellent reviews in its first season, continues to improve its ratings in subsequent seasons, with season 5 receiving a 92 percent Rotten Tomatoes rating.

Anna Chlumsky shared the ‘MTV Movie Awards’ for ‘Best Kiss’ with co-star Macaulay Culkin for her role in ‘My Girl’ in 1991 when she was 11 years old. In the same year, she was nominated for a ‘Chicago Film Critics Association’ award for ‘Most Promising Actress.’

She won two ‘Young Artist Awards’ in 1991 and 1994 for her roles as Vada Sultenfuss in the films ‘My Girl’ and ‘My Girl 2’. Her performance in ‘Gold Diggers: The Secret of Bear Mountain’ earned her the award for ‘Best Young Leading Actress – Feature Film.’ In 1998, she was nominated for another ‘Young Artist Award’ for her guest appearance on the TV show ‘Cupid.’

She has garnered multiple honors and nominations for her part in the critically acclaimed television series ‘Veep’ over the last five years. Between 2013 and 2016, she was nominated four times for ‘Primetime Emmy Awards’ for ‘Outstanding Supporting Actress in a Comedy Series.’

Shaun So, a corporate entrepreneur who previously served in the military, proposed to Anna Chlumsky in October 2007 and the couple married the following year, on March 8, in Brooklyn, New York. Penelope Joan So and Clara Elizabeth So are the couple’s two daughters.

Anna Chlumsky is an actress from the United States with a net worth of $5 million.

Anna Chlumsky’s father and father-in-law also work in the restaurant industry. Her father works as a culinary instructor at Kendall College in Chicago, and her husband Shaun’s father owns China Town in Topsham, Maine.