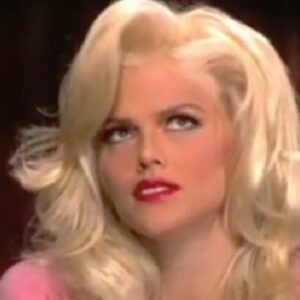 In the mid-1990s, Anna Nicole Smith was the quintessential voluptuous blonde. Her life narrative is one of a colourful woman who rose from rags to riches. Despite the fact that she had dropped out of school and had a tumultuous home life, she had always desired to make it big in life by any means necessary. She got the attention by posing for the magazine ‘Playboy.’ She also worked as a model for international publications such as Vogue, Vanity Fair, and The Face. She drew a lot of attention when she married J. Howard Marshall II, an 89-year-old oil tycoon, when she was only 26 years old. She was frantically attempting to make a name for herself in the film industry. She was cast in a few films and television series. She was constantly cast in a role that would allow her to capitalize on her sex symbol image. Whatever she did, it was front-page news. Even after her death, she is a source of interest and speculation to this day. Her life and untimely death have spawned a slew of books, documentaries, and films.

Anna was born in Houston on November 28, 1967, and raised by Donald Hogan and Virgie Mae in Mexia, Texas. Her mother worked as a deputy sheriff.

Anna was raised by her mother and aunt after her parents divorced in 1969. She had a rough upbringing. She went to Houston’s Durkee Elementary School and Aldine Senior High School. She, on the other hand, dropped out of school.
She met a cook, Billy Smith, while working at a neighborhood fried chicken restaurant as a teenager. She married Billy in 1985 when she was 17 years old, and they had a son named Daniel a year later. Billy and Anna divorced in 1993.

She went to Houston after the divorce and began working odd jobs such as working at Wal-Mart and as an exotic dancer at a strip club.

She rose to prominence after modeling for ‘Playboy’ magazine in 1992. She quickly rose to the top of the modeling world. Later that year, she appeared in advertising for the ‘Guess’ fashion company.
She was a model for H&M, a Swedish apparel business, in 1993.

She made her acting debut in the comedy series ‘The Hudsucker Proxy’ in 1994. She played a celebrity who had an affair with the main character. She also starred in the film ‘Naked Gun 33 1/3: The Final Insult’ in the same year. This picture was a box office hit. Both of these parts were minor. She stayed in the press after that, appearing in a number of celebrity magazines. She loved being on the news and getting all of the media’s attention.

In 1995, she landed the lead part in the film ‘To The Limit,’ which was released. She played a retired spy seeking vengeance on the murderer of her husband in this film. This film failed miserably. In the pilot episode of ‘The Naked Truth,’ she played herself.

In 1996, she attempted to re-establish herself in Hollywood by starring in the film ‘Skyscraper.’ This was a low-budget, straight-to-video film. This film, too, did not perform well, and her acting career came to a halt.
She then shifted her attention to a little screen. In 1998, she made an appearance in ‘Sin City Spectacular.’ In the same year, she starred in the self-promotional documentary ‘Anna Nicole Smith: Exposed.’ Her time as a ‘Playboy’ was the inspiration for this film.

In the sitcom ‘Veronica’s Closet,’ she played Veronica Chase’s buddy in 1999. She also appeared in an episode of ‘Ally McBeal’ as a guest star.

The Anna Nicole Show, a reality show that aired in 2002, brought her daily life to the attention of the public. Despite the fact that she appeared lost or puzzled for the majority of the program, it was a huge success.
In 2003, she made a comeback with the comedy ‘Wasabi Tuna.’

She struggled with her weight on and off throughout her career. In 1996, she weighed 224 pounds, which she reduced to 138 pounds in 1997. As a result, in 2003, she became a spokesperson for a diet product line. During this time, she also performed some modeling.

She starred in the science fiction comedy ‘Illegal Aliens’ in 2006. On this assignment, she was joined by her son Daniel.

She continued to influence films and literature even after she died. The opera ‘Anna Nicole: recounting Smith’s terrible narrative in song’ premiered in London in 2011. ‘The Anna Nicole Story’ was broadcast on the Lifetime television network.

Her reality show, ‘The Anna Nicole Show,’ was a hit when it premiered in 2002. This show was intended to capitalize on her growing celebrity as a gossip columnist. The highest cable rating was granted to this show. Her son Daniel, secretary Kimberly Walther, her homosexual interior decorator Bobby Trendy, her cousin Shelly Cloud, her dog ‘Sugar Pie,’ and lawyer/boyfriend Howard K. Stern were all featured on this show. College students and pop aficionados alike were enthralled by the concert. The show’s second season was never shown since the public had lost interest in it by that time.

She was one of the beauties named ‘Playmate of the Year’ by Playboy magazine in 1993. This magazine gave her an identity and gave her the sex symbol image that she would carry with her for the rest of her life.

Vickie Lynn Hogan was her birth name. She changed her name to Anna Smith on one of the marketing tasks.
She was dissatisfied with her existence in Mexia’s little village and desired to achieve greater success. As a result, she relocated to Houston and began working as a stripper. At this club, she met J. Howard Marshal II in 1999. He was a business magnet for Americans.

Marshal and Anna married in 1994 and were together until his death in 1995. Their marriage sparked a lot of controversy because she was 26 years old at the time of the wedding and he was 89 years old. Marshal was supposedly married solely for the sake of his estate.

Marshal’s widow sued her former stepson, E. Pierce Marshall, for half of her late husband’s $1.6 billion inheritance when he died. J. Howard Marshall II’s contested will was written shortly after his marriage to Smith, and it made no mention of her or his younger son. He had verbally promised her half of his riches if she married him, she alleged. She went through a protracted court struggle. The case reached the US Supreme Court in September 2005, and on May 1, 2006, she was granted permission to pursue her claims in federal court. Her life, however, took a sad turn after that.

On September 7, 2006, she gave birth to her second child in the Bahamas. Dannielynn was the name she gave to her baby child. Daniel, her 20-year-old son, died in the same hospital room three days after her daughter was born, apparently from a heroin overdose.

Following her son’s death, she was once again the topic of headlines and gossip regarding the paternity of her daughter. Larry Birkhead, her ex-boyfriend and photographer, claimed to be Dannielynn’s father. Anna, on the other hand, claimed that her attorney, Howard K. Stern, was the biological father of her daughter, and that he was mentioned on the birth certificate. Anna and Stern staged a tiny mock commitment ceremony in the midst of the paternity dispute. This ceremony, however, was not legally binding.

She died on February 8, 2007, at the age of 39, after collapsing in her hotel room in Florida. Her death was attributed to an overdose of the narcotics to which she was hooked.
Larry Brickhead was the biological father of her daughter, according to DNA tests conducted after her death.

She skipped out on her wedding to Howard Marshal and went to Greece on her own. Even in his final days, they didn’t stay together.
When a former female assistant sued her for $850,000 on sexual harassment claims, she filed for bankruptcy in 1996.

Her hero was Merlin Monroe.
She was a supporter of the anti-fur movement. She was also seen in advertising for the animal rights organization ‘PETA.’