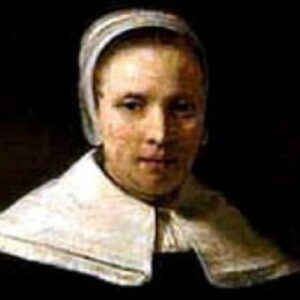 Anne Bradstreet became the first woman poet to be published in both England and America with the publishing of her first work “The Tenth Muse Recently Sprung Up in America, by a Gentlewoman of those Parts” in London in 1650. Her writing incorporated elements of the Elizabethan literary tradition and was heavily influenced by Guillaume du Bartas, a sixteenth-century French poet. Her early works were regarded as imitations and were believed to be conventional in their shape and subject. She gained critical acclaim as a writer of enduring verse only in the twentieth century. In 1956, poet John Berryman dedicated his work “Homage to Mistress Bradstreet” to her, which comprised a lengthy poem that contains numerous phrases from her writings. Her other most famous work, published in 1678, was “Several Poems Compiled with Great Wit and Learning.”

Anne Bradstreet was born in Northampton, England in 1612. She was Thomas Dudley’s and Dorothy Yorke’s daughter. His father was the Earl of Lincoln’s steward. Her family’s wealth aided in her upbringing and schooling. Anne was educated throughout her childhood in history, multiple languages, and literature. At the age of sixteen, she married Simon Bradstreet.

In 1630, Anne, Simon, and her parents emigrated to America on the Arbella ship, which was part of the Winthrop Fleet of Puritan emigrants. They arrived in America on June 14, 1630, and settled in what is now known as Pioneer Village (Salem, Massachusetts). Following a brief stay in the settlement, they continued south along the coast, eventually arriving in Charlestown, Massachusetts.

After a brief visit, they relocated to the newly founded City on the Hill in Boston, Massachusetts, along the Charles River. The family continued to move and eventually settled in what is now known as Cambridge, Massachusetts. In 1632, Anne gave birth to her first child, Samuel, at this location. Her husband and father made substantial contributions to the establishment of Harvard University in 1636.

Despite her failing health, she managed to give birth to eight children and maintain a comfortable social status. Anne had already been afflicted with smallpox, and when it attacked her again, she became paralyzed in her joints. When Anne was pregnant with her sixth child in the 1640s, Simon forcibly relocated here from Ipswich to Andover Parish. North Andover was founded in 1646 by the Bradstreet family and several other families, including Stevens, Osgood, Johnson, Farnum, and Barker.

In 1647, Rev. John Woodbridge, Bradstreet’s brother-in-law, traveled to England with a manuscript of Anne’s poems. In 1650, her poetry was published in London under the title “The Tenth Muse, Recently Sprung Up in America, by a Lady from Those Parts.” When this poem was published, she became the first female poet to be published in both England and the New World.

On July 10, 1666, a fire destroyed their North Andover family house, leaving the Bradstreet family homeless. Her health was deteriorating at the moment. She was tuberculosis-infected. It aggravated her condition, as she was already suffering the loss of several relatives.

Anne, as a religiously devout woman, stayed steadfast in the face of adversity. Her understanding of the Bible aided her in believing that her daughter-in-law Mercy and grandkids were in heaven. She died in 1672. Simon married a woman named Anne four years after she died. Simon died in Salem in 1697 and was buried there. The Harvard community erected a gate in her honor in 1997.

This gate, also known as the Bradstreet Gate, is located adjacent to Canaday Hall, Harvard Yard’s newest dormitory. In 2000, the North Andover cemetery dedicated a memorial to the 350th anniversary of the publication of her book “The Tenth Muse.” These two locations are the only ones in America dedicated to her memory.

Anne’s early education equipped her with the confidence necessary to write authoritatively about politics, history, medicine, and theology. Her personal library was reported to contain around 800 volumes, the majority of which were destroyed when her house burned down. The tragic tragedy led her to create a poem, “Upon the Burning of Our House July 10th, 1666,” in which she defies agony and grief by seeking assurance from the Almighty.

Her poetry was inspired by her observations of the world around her and was highly influenced by household and religious themes. In the twentieth century, Anne gained critical acclaim as a poet of enduring verse. Her cycle of religious poetry “Contemplations” drew the greatest amount of critical attention.

She composed this collection for her family, but it was not published until the mid-nineteenth century. During the times that Simon was overseas on diplomatic assignments, she kept herself amused by reading from her father’s large library. Reading not only relieved her loneliness, but also educated her about religion, science, history, the arts, and medicine. Her literary works were heavily influenced by the 17th-century poet Guillaume de Sallust Du Bartas.

Regardless of the traditional attitude toward women, Anne has always emphasized the importance of knowledge and intellect. Due to her independence of thought, some regard her as an early feminist. Her feminism cannot be characterized as heterodox or antinomian, but rather as complementarian.

When her first work, “The Tenth Muse Recently Sprung Up in America,” was published in London in 1650, many assumed it was an attempt by pious Puritan men to demonstrate that a god-fearing and educated woman could enhance the position of a wife and mother. However, for the majority of people, this belief was novel. Throughout her life, Anne has consistently disregarded and condoned overt gender bias.

“Several Poems Compiled with Great Variety of Wit and Learning,” a collection of her self-revised poems, was published posthumously in America in 1678. This collection featured “To My Dear and Loving Husband,” one of her most renowned poems.

She married Simon Bradstreet in 1628 when she was sixteen years old. Eight children were born to the couple.

Anne is one of the wealthiest poets and is ranked among the most popular poets. Anne Bradstreet’s net worth is estimated to be $44.77 million, based on our review of Wikipedia, Forbes, and Business Insider.