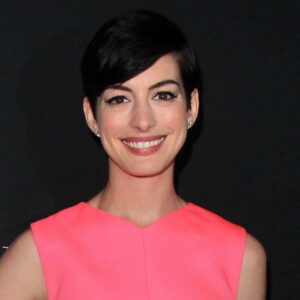 Anne Hathaway is an American actress, singer, and producer who has won numerous awards. ‘The Princess Diaries,’ ‘The Devil Wears Prada,’ and ‘Becoming Jane’ are among the films in which she has appeared. Anne was raised by an actress and was introduced to the complexities of acting at a young age. At the age of three, she grew interested in performing after being inspired by her mother. When she was eight years old, she told her parents that she wanted to pursue a career in acting. She began acting in commercials as a youngster and was the first teenager to be accepted into the famed Barrow Group acting program in New York City. She made her professional acting debut on television as a high school student after appearing in several theatrical shows while in middle school. She eventually moved into film and rose to notoriety with her appearance in ‘The Princess Diaries,’ a ‘Disney’ picture. She quickly rose to fame as a tall, attractive, and skilled actress known for her emotional and forceful performances. Anne Hathaway is a talented vocalist and voice actor who has won several renowned acting honors. She is an outspoken supporter of same-sex marriages and an LGBT activist.

Anne Hathaway was born in Brooklyn, New York, to Kate McCauley and Gerald Thomas Hathaway on November 12, 1982. Her father is a lawyer, while her mother was a theatrical performer in the past. Hathaway is the younger of two brothers.

Anne enjoyed watching her mother perform as a child. She was then inspired to pursue a career as an actress. She told her parents about her future goals when she was just eight years old. She also considered becoming a nun, but decided against it later.

She was a self-assured young lady with a lovely voice. She attended ‘Brooklyn Heights Montessori School’ and ‘Wyoming Elementary School’ for her primary schooling before enrolling at ‘Millburn High School,’ where she became involved in theatre plays.

She attended Poughkeepsie, New York’s ‘Vassar College’ before moving to New York University’s ‘Gallatin School of Individualized Study.’ She also attended the ‘American Academy of Dramatic Arts,’ where she was the first teenager to be accepted into the acting school of ‘The Barrow Group Theater.’

In 1999, Anne Hathaway landed her first major role as Meghan in the television series ‘Get Real.’ Despite the fact that the show only lasted one season, she was recognized for her performance.

In 2001, she was cast as Mia Thermopolis in the Disney comedy film ‘The Princess Diaries,’ based on Meg Cabot’s 2000 novel of the same name. The film was a great smash, with a third-place finish at the box office. In 2004, she appeared in the sequel to the film, ‘The Princess Diaries 2: Royal Engagement.’

She rose to prominence as a children’s role model after appearing in a series of family-oriented films such as ‘Nicholas Nickleby’ (2002) and ‘Ella Enchanted’ (2004). However, in order to avoid being typecast, the excellent actress began taking on a variety of roles.

She starred in the romantic drama film ‘Brokeback Mountain’ in 2005, which is about two men’s complicated emotional and sexual relationship. Lureen, a wife whose husband is in love with another guy, was played by Anne Hathaway.

In 2007, she received critical acclaim for her performance as Jane Austen in the historical biographical film ‘Becoming Jane.’ The film depicts Jane and Thomas Langlois Lefroy’s tangled love affair.
In the drama film ‘Rachel Getting Married,’ she plays Kym, a young lady in recovery for drug addiction. Hers was an emotionally charged portrayal, and she received high appreciation for it. Her performance garnered her a number of accolades and nominations.

In the period drama film ‘Les Misérables,’ she portrayed an impoverished factory worker who struggles to raise a child in 2012. The picture was a critical and commercial triumph, and Hathaway’s performance was well-received. In the same year, she starred in the film ‘The Dark Knight Rises’ as Selina Kyle.
‘Don Jon’ (2013), ‘Song One’ (2014), ‘Rio 2’ (2014), and ‘Interstellar’ are some of her other films (2014).

In 2015, she only had one theatrical release, the critically praised film ‘The Intern.’ The story follows a 70-year-old man who interns at an online fashion business run by Hathaway’s character Jules Ostin. In the film ‘Alice Through the Looking Glass,’ she reprised her role as White Queen the next year.

She returned to the big screen after a two-year hiatus with the film ‘Ocean’s 8,’ a spin-off of the ‘Ocean’s Eleven’ franchise. She appeared in the film alongside Sandra Bullock, Cate Blanchett, and Rihanna, among others.
Anne appeared in films such as ‘Serenity’ and ‘The Hustle’ in 2019. Both films got unfavorable reviews, with the latter outperforming the former at the box office. She was signed to play significant roles in films such as ‘The Last Thing He Wanted,’ ‘The Witches,’ and ‘Sesame Street,’ all in the same year.

In the drama film ‘Rachel Getting Married,’ she gained critical acclaim for her performance as a lady dealing with the guilt of having caused her brother’s death. Her moving portrayal of a drug addict whose irresponsible actions result in the death of her brother won her multiple prizes.

Her portrayal as Fantine in the 2012 film ‘Les Misérables’ is unquestionably one of her best. She played an impoverished factory worker struggling to raise her illegitimate child in the film. Despite the fact that Anne was initially regarded as inexperienced for the job, her flawless performance silenced her critics.
Critics praised her performance in the 2014 science-fiction film ‘Interstellar,’ directed by Christopher Nolan. Her portrayal of an astronaut garnered her a nomination for ‘Best Actress’ at the 2015 ‘Saturn Awards.’

In 2011, Anne Hathaway became engaged to actor Adam Shulman, whom she married in September 2012. Jonathan Rosebanks Shulman, the couple’s son, was born in 2016. In July 2019, the actress announced on social media that she and Adam Shulman are expecting their second child.
In 2016, Hathaway was nominated as the UN’s ambassador for gender equality.

She is an outspoken supporter of same-sex marriages and an LGBT activist. ‘The Creative Coalition,’ ‘The Step Up Women’s Network,’ ‘St. Jude Children’s Research Hospital,’ and ‘The Human Rights Campaign,’ are among the charities she supports.
This lovely actress struggled with melancholy and anxiety as a teenager, so she went vegetarian for a few years.

Anne Hathaway has a net worth of $35 million dollars.