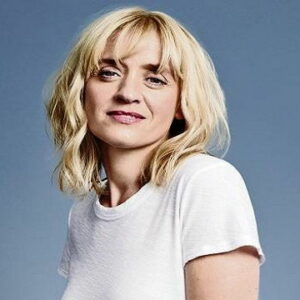 Anne-Marie Duff is an outstanding award-winning English actress who has made a name for herself in show business by playing with aplomb in television, radio, cinema, and theaters. Her roles as Fiona Gallagher in the British comedy-drama television series ‘Shameless’ and Queen Elizabeth I in the television miniseries ‘The Virgin Queen’ brought her widespread attention. Anne-Marie has also developed as a skilled theatre performer, with over two decades of experience on stage, including considerable work with the Royal National Theatre. Her notable on-stage performances include the title role in Marianne Elliott’s production of Saint Joan, for which she received a Laurence Olivier Award nomination for Best Actress; Lisa in ‘Collected Stories,’ for which she received a Laurence Olivier Award nomination for Best Actress in a Supporting Role; and Lady Macbeth in ‘Macbeth,’ in which she made her Broadway debut. She’s also had a great career on the big screen, appearing in films such as ‘Garage,’ ‘The History of Mr Polly,’ for which she won a BAFTA Cymru award for Best Actress,’ ‘Nowhere Boy,’ for which she received numerous honors and nominations, ‘Sanctuary,’ and ‘Suffragette.’ She’s also been in a number of radio dramas, series, and plays, including “A Streetcar Named Desire.”

Brendan, a painter and decorator, and his wife Mary, a shoe shop worker, welcomed her into the world on October 8, 1970, in Chiswick, London, England. Her parents were Irish immigrants from Donegal, Ireland.
She went to Mellow Lane School in Southall, London, where she grew up. She was a shy child who overcame her shyness by joining the local youth theatre ‘Young Argosy,’ which is affiliated with the Argosy Players. Gradually, her interest in the theater grew as a result of her efforts.
In her mid-teens, she became involved with an amateur theatre company and seriously considered applying to theater schools. Despite the fact that her first application was turned down, Anne-Marie continued her studies in film and theatre and, at the age of 19, enrolled in the Drama Centre, a British drama school in King’s Cross, London.

In the early 1990s, Anne-Marie made her professional theatre debut with pieces such as “Uncle Silas” (1994) and “The Mill on the Floss” (1994). She went on to work extensively with the Royal National Theatre over the years, honing her skills as a stage performer.
Natasha in British playwright and screenwriter Helen Edmundson’s 1996 stage version of Leo Tolstoy’s classic novel ‘War and Peace’ was one of her first significant performances.
She went on to act in a number of other notable stage productions, including ‘King Lear’ (1997–1998), ‘Vassa’ (1999), and ‘Collected Stories’ (1999–2000). The latter, directed by Howard Davies and premiering in November 1999 at the Royal Haymarket Theatre and closing on February 5, 2000, earned her a Laurence Olivier Award nomination for Best Actress in a Supporting Role.
Meanwhile, she appeared in a few episodes of series such as ‘Trial & Retribution’ (1997) and ‘The Way We Live Now’ (2001); on radio as Viola in ‘Twelfth Night’ (1998) and Cypassis in ‘The Art of Love’ (2000); and in the short film ‘Mild and Better’ as ‘The Woman’ (1998).
‘Enigma,’ a 2001 espionage thriller, and ‘The Magdalene Sisters,’ a 2002 drama, were among her first big-screen achievements. In the latter, she played Margaret McGuire, the leading lady.
Anne-Marie rose to notoriety as Fiona Gallagher in the highly acclaimed British comedy-drama series ‘Shameless’ when she was only a few years old in the industry. She was a series regular for the first two seasons (2004–2005) and a series guest in the eleventh season of the Channel 4 series, which aired from January 13, 2004 to May 28, 2013. (2013).
Her outstanding performance in ‘Shameless’ earned her nominations for Best Actress in a TV Drama at the 2004 Irish Film and Television Awards, Best Actress from the Broadcasting Press Guild in 2005, and Best Female Actor from the Royal Television Society in 2006.
She rose to prominence after appearing as Queen Elizabeth I in the four-part BBC television drama ‘The Virgin Queen,’ which was based on the life of the monarch. Anne-Marie received two award nominations for the miniseries, Best Actress from the British Academy Television Awards and Best Actress in a Lead Role in Television from the Irish Film and Television Awards, both in 2007.
While steadily establishing her on-screen career, she gave one of her most memorable stage performances as the eponymous heroine in Marianne Elliott’s 2007 production of George Bernard Shaw’s ‘Saint Joan.’ Her Laurence Olivier Award nomination for Best Actress was for the play she performed at the Olivier Theatre in London. She portrayed Miriam in the 2007 feature-length adaptation of H. G. Wells’ 1910 comedic novel ‘The History of Mr. Polly.’ It earned her the BAFTA Cymru award for Best Actress in a Leading Role in 2008. In 2007, she took part in the ‘What’s it going to take?’ campaign, which raised awareness about domestic abuse in the United Kingdom.
She also gained notoriety in 2007 for her role as Carmel in the highly acclaimed Irish film ‘Garage.’ The film was nominated for Best Film at the 25th Torino Film Festival, as well as the CICAE Art and Essai Cinema Prize at the Cannes Film Festival that same year, while Anne-Marie was nominated for Best Actress in a Supporting Role at the 2008 Irish Film and Television Awards.
Julia Lennon, mother of English singer, songwriter, and co-founder of the Beatles, John Lennon, in the 2009 British biographical drama film ‘Nowhere Boy,’ based on John Lennon’s adolescence, was her second noteworthy film role.
The critical reception to ‘Nowhere Boy’ was mainly favourable. It earned her an Evening Standard British Film Awards Best Actress award, a BIFA Award for Best Supporting Actress, and a London Film Critics’ Circle Award for British Supporting Actress of the Year. She was also nominated for various awards, including a BAFTA Award and a Satellite Award.
She received a nomination for Best Actress in a Film at the 2012 Irish Film and Television Awards for her outstanding performance as Maire in the film “Sanctuary” (2012).
Her Broadway debut was in the 2013 theatrical production of William Shakespeare’s tragedy “Macbeth” at the Lincoln Center Theater, where she played Lady Macbeth. She returned to the part in the Royal National Theatre’s staging of the play in 2018.
She played Violet Miller in the blockbuster hit 2015 British historical period drama film ‘Suffragette,’ which was the first feature film to be filmed in the Houses of Parliament. Meryl Streep, Carey Mulligan, Brendan Gleeson, Ben Whishaw, and Helena Bonham Carter also starred in the film. Anne-Marie was nominated for a BIFA Award for Best Supporting Actress for her performance.
Other notable works by this talented actress include plays such as ‘A Doll’s House’ (2000) and ‘Days of Wine and Roses’ (2005); TV series such as ‘From Darkness’ (2015) and ‘Hospital’ (2017); films such as ‘Sinners’ (2002) and ‘Born Equal’ (2006); and big-screen films such as ‘The Waiting Room’ (2007) and ‘French Film’ (2007). (2008). Along with Sandra Bullock and Rachel Weisz, she will star in ‘Imagination of the Creatures.’