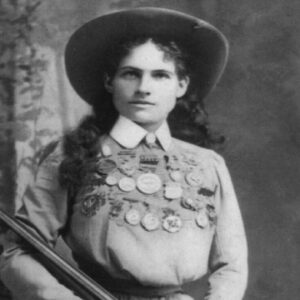 Annie Oakley was an American sharpshooter who is widely regarded as the country’s first female celebrity. By winning a bet against legendary marksman Frank E. Butler, whom she later married, she shattered men’s monopoly in the shooting area. She finally became a part of the ‘Buffalo Bill’s Wild West’ act and toured numerous European nations. Her self-made inexpensive clothes set her apart from the other performers, yet she proved to be no less of a performer, demonstrating talents such as shooting through flying cards and corks from bottles. Queen Victoria of the United Kingdom, King Umberto I of Italy, French President Marie François Sadi Carnot, and German Kaiser Wilhelm II were among those she entertained. Several plays, movies, and television shows have been based on her life, the most well-known of which is the stage and screen adaptations of ‘Annie Get Your Gun.’ She taught a lot of women how to shoot. She remembered her early days of hardship and supported orphans by donating to numerous charities, even after becoming one of the biggest stars in her business.

Annie Oakley was born on August 13, 1860, in rural Darke County, Ohio, to Susan Wise and Jacob Mosey as Phoebe Ann Mosey. She was the fifth surviving child of her parents’ seven children.

Her father died of pneumonia when she was six years old after being caught out in a blizzard. Her mother remarried, but her second husband, Daniel Brumbaugh, died tragically soon after. In 1870, her mother, unable to sustain all of her children, put her and her older sister, Sarah, to the Darke County Infirmary.

Annie Oakley helped the Edingtons, the administrator of the infirmary and his wife, around the infirmary and learnt to sew while living with them. In exchange for an education, she was later assigned to a local family to care for their newborn child.

However, she was forced to do severe menial work and was abused for a long time by her family. She eventually made her way back to the Edingtons, who returned her to her mother.

Her mother married for the third time in 1874, but her marriage to Joseph Shaw did not help the family’s financial situation. Annie began hunting for wildlife with her father’s gun, selling it to local shopkeepers, hotels, and restaurants in order to aid her family.

She used her money to pay off the mortgage on her mother’s farm when she was 15 years old.

A local hotel owner arranged a shooting contest between Annie Oakley and Frank E. Butler, a traveling show marksman, on Thanksgiving Day in 1875. Butler offered the hotel owner $100 per side that he could beat any local fine shooter.

Annie Oakley won both the bet and Butler’s heart, and the two married the following year after months of romance. According to some versions, the shooting competition took place in 1881, followed by their marriage the following year.

Butler continued to appear on television shows for a while, frequently collaborating with a male partner. When his partner became unwell during a performance in 1882, Annie took over and immediately enchanted the crowd with her performance.

Soon after, she began performing professionally and used the stage name “Oakley,” which she derived from the Ohio town of Oakley. Butler became her manager after assisting her in gaining notoriety. She used her sewing skills to construct her own costumes instead of wearing risqué attire worn by other female artists.

She impressed famed Native American warrior Sitting Bull, who given her the nickname “Watanya Cicilla,” or “Little Sure Shot,” during an event in St. Paul, Minnesota, in 1884. As the term began to appear in advertisements for her events, she became known by it.

Show of the ‘Wild West’

Annie Oakley and her husband joined ‘Buffalo Bill’s Wild West,’ a traveling circus, in 1885. She began to demonstrate her exceptional sharpshooting abilities and remained a member of the group for about 17 years, entertaining the audience.

She enchanted Queen Victoria with her performance during the 1887 American Exposition in London. Despite this, her success was hampered by a spat with another sharpshooter, Lillian Smith, which led to her leaving the business after the show.

For a period, she toured with a rival ‘Wild West’ performance, but once Smith quit the show, she returned to ‘Buffalo Bill’s Wild West.’ She embarked on a three-year trip of Europe in 1889, beginning in Paris.

She was largely incapacitated for a while after a train accident in 1901. She quit the ‘Wild West’ show after her recuperation and began a career as a theater actor in a play based on her life. In the play ‘The Western Girl,’ she played Nancy Berry, a ‘cowgirl.’

Annie Oakley was the star of ‘Buffalo Bill’s Wild West’ and the show’s highest-earning act. She could do things like shoot a cigarette through her husband’s lips, shoot objects through a mirror, split cards on their edges, and so on.

She saw being able to fire a gun as empowering for young women, and she went out of her way to educate over 15,000 women how to shoot. She believed that women should be permitted to fight in the war since she was a proponent of women’s education and freedom.

During the Spanish-American War, Annie Oakley volunteered to form a female sniper battalion. Despite President McKinley’s rejection of her plea, Theodore Roosevelt named his volunteer cavalry the “Rough Riders” after Oakley’s act.

Annie Oakley was imprisoned for stealing to sustain a cocaine habit in 1903, according to a fictitious article published by William Randolph Hearst. Outraged, she spent a lot of time and money over the next few years filing 55 lawsuits against various newspapers, winning 54 of them.

Annie Oakley and Butler were married for fifty years, until her death in Greenville, Ohio, on November 3, 1926. At the age of 66, she died of pernicious anemia. Butler, her husband, was said to have been so distraught that he starved himself to death 18 days after she died.

The couple had no children, and her riches was donated to organizations to which she was connected. She was sensitive towards children and donated to support orphans after spending much of her youth in foster care.

Annie Oakley, the well-known actress Before she died, Annie Oakley had a net worth of $5 million.

Annie Oakley shot through playing cards in the air and punched a hole in them as part of one of her acts. During her lifetime, theaters began issuing complimentary tickets with a punch in the centre to prohibit further sales, and the tickets were dubbed “Annie Oakleys.”