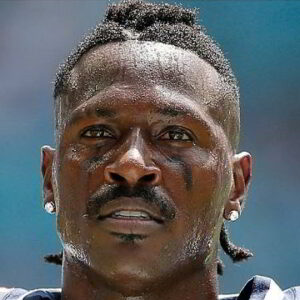 Antonio Brown is an American football wide receiver and punt returner who played for the ‘Pittsburgh Steelers’ of the National Football League (NFL) from 2010 to 2018. He was dealt to the ‘Oakland Raiders’ in 2019 before being signed by the ‘New England Patriots’ the following year. He is the son of star ‘Arena Football League’ player Eddie Brown, but he spent much of his teenage years without proper direction and support because he resided apart from his father during his upbringing. Despite this, he made it onto the ‘Central Michigan University’ football team and was later selected as a wide receiver by the ‘Pittsburgh Steelers.’ He rose to become the team’s star player and went on to set countless ‘NFL’ records. He went on to set a slew of new marks as well. He is currently the top wide receiver in the ‘NFL.’ Seven times he has been named to the ‘Pro Bowl,’ and four times he has been named to the ‘First Team All-Pro.’

Eddie Brown, a former ‘Arena Football League’ player, and Adrianne Moss gave birth to Antonio Brown on July 10, 1988, in Miami, Florida. His father, who was a member of the ‘Albany/Indiana Firebirds,’ was named the greatest player in the league’s history.
Desmond Brown, Antonio’s younger brother, is also a professional football player who plays with the ‘Pittsburgh Panthers.’ After his father joined the ‘Albany/Indiana Firebirds,’ his parents divorced in the mid-1990s.
When he was 12 years old, his mother remarried. He was then forced out of the house when he was 16 since he didn’t get along with his stepfather. He had to spend his nights at a friend’s house, inside a car, or in a cheap motel for around six months.
He went to ‘Miami Norland High School’ in Miami, Florida, where he won the 2005 ‘Miami-Dade Gridiron Classic’ as the ‘North Athlete of the Year.’ However, due to his poor academic record as a result of his personal problems, he was denied admission to ‘Florida State University’ and had to spend a year in 2006 taking prep classes at ‘North Carolina Tech.’
He received a scholarship at ‘Florida International University’ in Miami after a season at ‘North Carolina Tech.’ He was removed from the squad before he could officially join because he got into a fight. Fortunately, he received a call from an old acquaintance, Zach Azzanni, who offered him a position at ‘Central Michigan University.’

Antonio Brown enrolled as a walk-on wide receiver for the football squad at ‘Central Michigan University’ in 2007. Azzanni also assisted him in obtaining a scholarship in a matter of weeks.
Coach Butch Jones was initially dubious, but he quickly saw Brown’s potential and played him in 14 games during his rookie year. He went on to win the ‘Mid-American Conference Freshman of the Year’ award in the end.
He started every game as a sophomore in 2008, including a season-high two touchdown receptions against ‘Temple.’ During that season, he had a total of 93 receptions for 998 yards and seven touchdowns.
During his junior year, he recorded a season-high two touchdowns against the ‘Zips,’ as well as a season-high 13 receptions for 178 yards versus ‘Troy.’ With 110 receptions, 1,198 receiving yards, and nine touchdowns, he set the single-season marks.

Antonio Brown dropped out of college before his senior year to enter the 2010 ‘NFL Draft.’ The ‘Pittsburgh Steelers’ selected him as their second wide receiver, and he was the 22nd wide receiver overall.
He made his NFL debut in 2010 against the ‘Tennessee Titans.’ He helped his club reach the ‘Super Bowl’ after finishing first in the ‘AFC North,’ but he lost his first ‘Super Bowl’ match against the ‘Green Bay Packers’ in February 2011.
After Hines Ward and Mike Wallace, he knocked out Emmanuel Sanders, Arnaz Battle, Limas Sweed, and Jerricho Cotchery to become the Steelers’ third wide receiver in 2011. He had 69 receptions for 1,108 yards, two touchdown grabs, and three starts in 16 games that season.
In 2012, he had a tough season, receiving a $10,000 fine for unsportsmanlike conduct in a game against the ‘Washington Redskins.’ He also sprained his ankle and had to sit out three games. In 13 games and ten starts, he concluded the season with 66 receptions for 787 yards and five touchdowns.
He broke Yancey Thigpen’s 1997 single-season team record of 1,398 receiving yards entering the 2013 season as a starter wide receiver for the ‘Pittsburgh Steelers’ alongside Emmanuel Sanders. He also became the second Steeler to have at least 100 receptions in a season, joining teammate Hines Ward. He was fined $8,200 during the 2014 season for accidently kicking ‘Cleveland Browns’ punter Spencer Lanning while attempting to hurdle. He set three new team marks with 129 receptions, 1698 receiving yards, and 13 touchdowns by the end of the season.
With a career total of 5,587 yards, he surpassed Steelers veteran Lynn Swann to enter the NFL’s top 200 all-time receiving yards list in 2015. With 136 receptions for 1,834 yards and 10 touchdowns during the season, he broke his own record. In addition, he set two records for the most receptions in a two-year and three-year period.
He made the ‘NFL top 100 all-time’ and ‘NFL top 100 all-time’ for career receptions and career receiving yards, respectively, during the 2016 season. By the end of the season, he was the ‘Steelers’ second-best player in terms of career receptions and third-best in terms of career receiving yards.
In 2017, he renewed his five-year contract with the ‘Steelers.’ He concluded the 2017 season with 1,533 receiving yards, which was the most in the league. It was only the second time in his career that he ended a season with such a flourish.
During the 2019 ‘NFL Draft,’ the ‘Steelers’ agreed to trade Brown to the ‘Oakland Raiders.’ Brown was released by the ‘Raiders’ after a series of off-the-field issues and a feud with general manager Mike Mayock.
Brown got a one-year contract with the ‘New England Patriots’ worth up to $15 million on September 7, 2019. In addition, he was given a $9 million signing bonus. He caught four catches for 56 yards and a score in his Patriots debut, helping his side to a 43–0 victory. The ‘Patriots’ cut Brown on September 20 after severe claims of sexual and personal wrongdoing.

Antonio Brown is the father of five children. His son Antonio Brown Jr. and daughter Antanyiah are the result of his previous relationship. He married Chelsie Kyriss in 2011, and they have three children together: Autonomy, Ali, and Apollo. He was pictured with model Jenna Frumes in early 2017, fueling dating rumors. He reportedly left her to be with his partner Kyriss once the rumors began to spread.

Antonio Brown has a net worth of $20 million.

He picked 84 as his jersey number after being selected by the ‘Pittsburgh Steelers’ in the 2010 ‘NFL Draft.’ Before becoming a member of the ‘Pittsburgh Steelers,’ he claims he was overlooked by 32 (8×4) teams.
He debuted on the 22nd season of the ‘ABC’ network’s dance competition show ‘Dancing with the Stars’ in March 2016. He made it to the semifinals of the show with Sharna Burgess, his professional dance partner.
On January 3, 2019, Brown competed in the first season of the American version of ‘The Masked Singer,’ but was eliminated in the first episode.