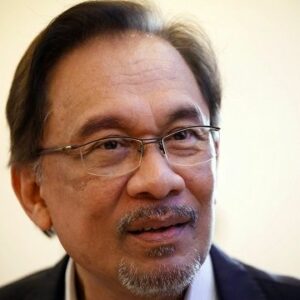 Anwar Ibrahim aka Datuk Seri Anwar Ibrahim aka Anwar bin Ibrahim is a prominent Malaysian politician. Anwar was born into a fairly wealthy family. His parents, who were both involved in politics, taught him how to be a leader at a young age. As his country moved from being a colony to having full independence, he joined a growing group of people who were proud of their country and their heritage. He used his confidence and ability to lead to become a well-known student leader, known for his religious and cultural interests. Then Ibrahim joined a strong political party and quickly moved up the ranks. After holding a few different jobs in the cabinet, he was seen as the heir to the long-time strongman who was in charge. But when people had different ideas about how to handle a financial crisis, Ibrahim was thrown out of power and sent to jail. His political enemies took advantage of sodomy laws and kept him in jail with very weak circumstantial evidence. After the charges were later dropped by a court, Ibrahim was again caught in a trap related to his sexuality, which is a big source of intolerance and criticism in his home country. Ibrahim is respected in the west, especially for his pro-market economics ideas, but the people in power in his home country are always trying to stop him from being politically active in any way they can.

His father’s name was Ibrahim Abdul Rahman, and he was a hospital porter. Che Yan, his mother, was a full-time mom. Later, both of his parents went into politics. His father was a cabinet minister before he retired.

In 1968, Ibrahim went to Kuala Lumpur to attend the “University of Malaya.” He started being a leader right away, and it didn’t take long for him to be elected president of the “National Union of Malaysian Muslim Students.” He quickly became known for how strongly he supported Islam.

The young leader then took on more responsibilities when he was chosen to lead the “Malay Language Society” at the University of Malaya. He helped start the “Muslim Youth Movement of Malaysia” and was president of the “Malaysian Youth Council” the following year.

He was arrested in 1974 because he took part in a student protest against poverty in rural areas. Because of the strict security laws in his country, he was locked up for almost two years without being tried.

He was chosen to represent the whole Asia-Pacific area at the “World Assembly of Muslim Youth” from 1975 to 1982.
The “United Malays National Organization” put Mahathir bin Mohamed in charge in 1991. (UMNO). He became Prime Minister after the general elections.

Even though Anwar was president of more than one group, his decision to join the UMNO in 1982 surprised many of his supporters. Almost right away, he was given a number of ministerial positions.

In 1989, he was put in charge of the UNESCO General Conference because of his work as Minister of Education.
In 1991, he was given the job of Minister of Finance. His changes to the market and economic ideas helped the country get richer at the same time.

In 1998, Ibrahim was chosen to be the head of the World Bank and International Monetary Fund’s Development Committee (IMF).

In 1993, he won a party vote and became Malaysia’s Vice President. Even though there were many accusations of corruption, he was seen as being set up to become Prime Minister.

In 1997, he was put in charge of the country while Prime Minister Mahathir was on vacation for two months. Soon, Mahathir and Ibrahim started to disagree, because Ibrahim liked IMF-backed austerity programs and Mahathir wanted to go in a different direction.

Anwar was picked up on September 20, 1998. He was charged with corruption because it was said that he tried to get in the way of a different police investigation. While he was in jail, the Inspector General of Police beat him himself.

In April 1999, he was found guilty of sodomy and given a prison sentence of six years. Based on how Malaysian law works, this political leader got another nine-year sentence two months later. People all over the world laughed at his conviction because it was a clear case of political persecution.

In the fall of the same year, Anwar sued Prime Minister Mahathir in civil court for slander.
The Supreme Court of Malaysia took away his sentence on September 2, 2004. Then, he taught at a number of prestigious colleges and universities, such as St. Antony’s College in Oxford, Johns Hopkins SAIS in Washington, D.C., and Georgetown University’s School of Foreign Service.

In November 2006, he said he would run for office in the next election.
Ibrahim was arrested again for sodomy in July 2008. After being arrested, he could no longer run in the upcoming election.

His PKR party got 31 seats in parliament. Despite this, the politician became the Leader of the Opposition by taking advantage of a technical loophole. He held this position until March 16, 2015.

After a long trial, Ibrahim was cleared of all charges in January 2012.
On March 14, 2014, an appeals court ruled against the stay, and his conviction was brought back into effect. The decision was widely criticized around the world because it was seen as clearly based on politics.
This famous leader is still a political problem for the people in power in Malaysia.

From December 1, 1993, until September 2, 1998, Anwar Ibrahim was Malaysia’s, Deputy Prime Minister. This leader’s time in office has been full of controversies, but his economic policies to bring about social equality have been praised all over the world.

Ibrahim is known for saying honest things about Israel. For example, he has said that the Malaysian government uses an Israeli PR firm that is directly linked to the deaths of Palestinians.

Many organizations have made strong claims that some of this political leader’s views are anti-Semitic. Even though he wants Malaysia’s laws against homosexuality to be less strict, he is against making gay marriage legal.

Anwar Ibrahim is one of the wealthiest politicians and is on the list of the most well-known politicians. Wikipedia, Forbes, and Business Insider all say that Anwar Ibrahim has a net worth of about $3 Billion.