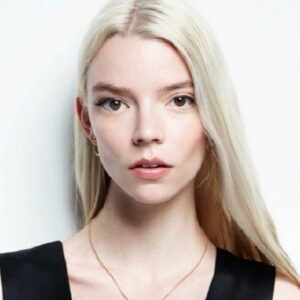 Anya Taylor-Joy is a British-Argentine actress best known for her work in horror films such as “The Witch,” “Split,” and “Glass.” Her well-known turns in horror films have earned her the moniker “scream queen.” Joy moved to Argentina as an infant after being born in the United States parents an English-Spanish photographer and interior designer and a Scottish-Argentine financier. She relocated to London at the age of six, where she acquired her education before being scouted as a model at the age of sixteen. Taylor-Joy, who won the Trophée Chopard at the Cannes Film Festival, is a multitalented woman. She is an accomplished guitarist and ukulele player, as well as a trained ballet dancer. Behind the scenes, the stunning lady is a caring sister of five, and she is unquestionably a rising star. She is a family-oriented girl on a personal level. She is a huge fan of British actor Eddie Redmayne and considers him to be one of her biggest movie crushes.

Anya Taylor-Joy began her modeling career at the age of 16 when she was discovered by a Storm Model Management representative outside Harrods Department Store. She made her acting debut in an episode of ‘Endeavour’ in 2014. The character of Thomasin in the period horror film ‘The Witch’ won her notoriety the following year. Joy also starred as Cassandra in the British fantasy-adventure TV series ‘Atlantis’ that year.
She played Casey Cooke in Luke Scott’s sci-fi horror ‘Morgan’ and in the thriller ‘Split’ in 2016. In the same year, she starred in Vikram Gandhi’s film ‘Barry.’ The video followed a youthful Barack Obama as he navigated his way through Columbia University. Joy appeared alongside Devon Terrell, Jason Mitchell, Jenna Elfman, Ashley Judd, Ellar Coltrane, and Avi Nash in the film as one of Obama’s pals.
Anya Taylor-Joy played Petronella Brandt in the television miniseries ‘The Miniaturist’ in 2017. She also had roles in the Spanish psychological horror film ‘Marrowbone’ and Cory Finley’s directorial debut ‘Thoroughbreds’ that year. In the 2019 film ‘Glass,’ the gifted actress resumed her role as Casey.
She appeared in a number of films in the following years, including ‘Radioactive,’ ‘The New Mutants,’ ‘Playmobil: The Movie,’ and ‘Here Are the Young Men.’ Taylor-Joy will also play Brea in the upcoming Netflix television series ‘The Dark Crystal: Age of Resistance,’ which is a prequel to the 1982 film ‘The Dark Crystal.’ Aside from that, the stunning actress will star in a remake of ‘Nosferatu,’ directed by Eggers. Joy will also appear in ‘The Sea Change,’ another production.

Anya Taylor-Joy was born in Miami, Florida, on April 16, 1996. Her Scottish-Argentine father worked as an international banker, while her English-Spanish mother worked in the fields of interior design and photography.
Taylor-Joy began her education in a Kensington preparatory school. She went on to Queen’s Gate School in London after attending Northlands School in Argentina.

Anya Taylor–Joy has a net worth of $3 million.