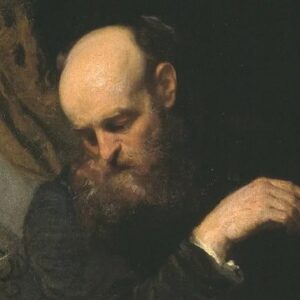 Archimedes of Syracuse was a great mathematician, inventor, physicist, engineer, and astronomer in ancient Greece. He is regarded as one of the most prominent scientists and mathematicians of the classical era, despite the fact that nothing is known about his life. He laid excellent foundations in mathematics and physics, particularly in statics and hydrostatics, and he also explained the lever principle. He designed unique machinery such as screw pumps, compound pulleys, and siege machines during his lifetime. He is credited with foreshadowing modern calculus and analysis by deriving a number of geometrical theorems, including the area of a circle, the surface area and volume of a sphere, and the area under a parabola. He used the’method of exhaustion’ to calculate the area under a parabola’s arc using the summation of an endless series, yielding an exact estimate of pi. He also discovered the spiral that bears his name, devised formulae for the volumes of revolution surfaces, and developed a method for expressing exceedingly big numbers. While Archimedes’ innovations were well-known in antiquity, his mathematical papers were relatively unknown. Isidore of Miletus compiled the first comprehensive collection of his mathematical papers in 530 AD. Eutocius’ commentaries on Archimedes’ works, written in the sixth century AD, were the first to bring them to a wider audience. Only a few copies of Archimedes’ written work survived the Middle Ages, but they became a major source of inspiration for scientists during the Renaissance. Furthermore, the discovery in 1906 of previously undiscovered writings by Archimedes in the Archimedes Palimpsest has shed additional light on how he arrived at mathematical conclusions.

He was born around 287 B.C. in Syracuse, Greece, on the Greek island of Sicily. Phidias was his father’s name, and he was an astronomer. According to Plutarch, he was related to Hieron, King of Syracuse, and his son Gelon.
Archimedes’ companion Heracleides wrote a biography on him, but it was lost, and little information about his life is known.
According to some, he began his studies at Alexandria, Egypt, in the school founded by the Greek mathematician Euclid. He returned to Syracuse after finishing his studies to reside in his hometown.

The Principle of Archimedes

This was one of his most significant discoveries. He devised a method for calculating the volume of an item having an irregular shape that he discovered.
King Hiero II had sent pure gold to have a crown created for himself, but when he received it, he believed it had been tainted with silver, so he summoned Archimedes to check. Archimedes discovered that the amount of water overflowing the tub was related to the amount of his body that was submerged when taking a bath. It occurred to him that the same would apply to the crown, and that he could weigh them in water using the proportions of gold and silver.

The Screw of Archimedes

It’s worth noting that a number of his discoveries were prompted by the needs of his hometown, Syracuse.
According to Athenaeus of Naucratis, King Hiero II tasked Archimedes with creating a ship called “Syracusia” that could transport a huge number of passengers, supplies, and be employed as a naval warship. Syracusia had adequate space to transport 600 people. It had a gymnasium, as well as a temple dedicated to the goddess Aphrodite and a garden.
Because a ship of this size would lose a massive amount of water through the hull, Archimedes devised a screw to drain the bilge water (the bilge is the lowest compartment on the ship and the water that collects in this area is called bilge water). The Archimedes’ screw was a cylinder-shaped device with a spinning screw-shaped blade.
The Archimedes’ screw is still useful for propelling liquids as well as solids like grain and coal.

It was designed by him to defend his city and is known as the “Ship Shaker.” It was made out of a crane-like arm on which hung a big metal-grasping hook. When the claw sank into an enemy ship, the arm swung upward, raising the ship out of the water and possibly sinking it.
Modern trials were carried out to determine the device’s practicality. In 2005, the claw was shown in a documentary called “Super Weapons of the Ancient World,” which claimed that it was a functional gadget.

According to Lucia’s book from the 2nd century AD, Archimedes used fire to destroy enemy ships during the Siege of Syracuse. Anthemius of Tralles, centuries later, referred to this weapon as “burning spectacles.” The “Archimedes heat ray” is another name for this gadget. With the use of this gadget, sunlight was concentrated on incoming ships, and the ships caught fire.
Since the Renaissance, however, the device’s credibility has been a source of contention. René Descartes dismissed it as a fallacy, but recent academics argue that the effect may be replicated. Large arrays of highly polished bronze or copper shields, which would have worked as mirrors to direct sunlight onto a ship, are thought to have been utilized.

Archimedes also made a significant contribution to mathematics. This genius was able to apply infinitesimals in a way that was similar to modern integral calculus centuries ago.
He calculated the value of using the “Method of Exhaustion.” This method could be used to calculate the areas and volumes of shapes having curved lines and surfaces, such as pyramids, cones, circles, and spheres. This aided mathematicians in developing integral calculus, which is now an important aspect of modern mathematics.
He also established that the area of a circle is equal to the radius of the circle multiplied by the square of the radius (r2).
Archimedes proved that the area encompassed by a parabola and a straight line equals 43 times the area of an analogous inscribed triangle in ‘The Quadrature of the Parabola.’
He calculated the value of the square root of 3 to be between 265153 (roughly 1.7320261) and 1351780 in Measurement of a Circle (approximately 1.7320512). The actual value is around 1.7320508, which is a pretty close approximation.

In his work ‘On the Equilibrium of Planes,’ Archimedes worked on levers and explained them as well as the principles involved. Archimedes created block-and-tackle pulley systems, according to Plutarch. This enables sailors to carry large objects using the theory of leverage. He has also received credit for enhancing the accuracy and power of the catapult. He also invented an odometer during the First Punic War.
Galileo Galilei devised a hydrostatic balance for weighing metals in air and water in 1586, which was inspired by Archimedes’ work.

His works have not been preserved. The existence of seven of his treatises is known thanks to allusions made by other authors. His compositions were composed in Doric Greek, Syracuse’s native tongue.
Isidore of Miletus, a Byzantine Greek architect, was the first to gather his writings in 530 A.D.
Eutocius published commentary on Archimedes’ writings in the 6th century A.D., which aided in bringing Archimedes’ work into the realm of the ordinary man.
Thbit ibn Qurra translated his book into Arabic between 836 and 901 A.D., while Gerard of Cremona translated it into Latin between 1114 and 1187 A.D.
On the Equillibrium of Planes, On Spirals, On Measuremant of Circles, On Cuboids and Spheroids, On Floating Bodies, On Sphere and Cylinders, (O)stomachion, The Quadrature of the Parabola, The Method of Mechanical Theorem, Archimedes’ Cattle Problem, and The Sand Reckoner are the works of Archimedes that have survived.
The most notable document containing Archimedes’ Works is the Archimedes Palimpsest.

He was a brilliant scientist and mathematician who contributed to a number of breakthroughs and inventions. Archimedes’ principle, Archimedes’ screw, hydrostatics, levers, and infinitesimals were among his most notable works.

There is little evidence about his personal life, but historians estimate he died around 212 B.C. or 211 B.C. This was the year that the Roman general Marcus Claudius Marcellus seized Syracuse and Archimedes was slain by a Roman soldier.
Archimedes was working on a mathematical figure when a soldier approached him and said the general wanted to meet him. Archimedes declined, claiming he needed to finish his job first. The soldier became outraged and used his sword to kill Archimedes.
Archimedes may have been murdered while surrendering to the army, according to Plutarch. Archimedes had mathematical equipment in his possession, which the soldier mistook for valuable stones.
On Archimedes’ tomb, there was a sculpture depicting his favorite mathematical arguments, a cylinder and a sphere. Both are the same size in terms of height and diameter.

In the 1960s, a tomb was uncovered in a hotel courtyard in Syracuse that was alleged to be his, but no one knows where it is now.
Galileo referred to him as “Superhuman,” and appreciated and drew inspiration from his writings on numerous occasions.
To honor him, a lunar crater has been named Archimedes, and a lunar mountain range has been called Montes Archimedes.
Archimedes is named after the asteroid 3600 Archimedes. A portrait of Archimedes can be found on the Fields of Medal for excellent performance in mathematics.
Archimedes was featured on postage stamps released in Spain in 1963, Nicaragua in 1971, East Germany in 1973, Marino in 1982, and Greece and Italy in 1983.

The word “Eureka,” which he uttered in ecstasy, is now the state motto of California. It has to do with the 1848 discovery of gold near Sutter’s Mill, which sparked the California Gold Rush.
He was instrumental in the defense of Syracuse in 213 B.C. by building battle equipment. These machines were so effective that they prevented the Romans from capturing the city during their siege.
Although there is no good evidence to support this, it is reported that this brilliant scientist and mathematician’s final words were “Do not disturb my circles.”