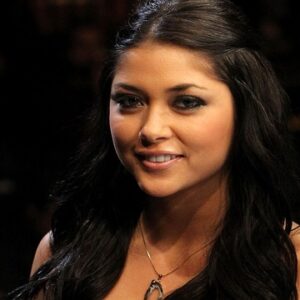 Arianny Celeste, a popular model and ring girl, is most recognized for being one of the most dependable personalities at the Ultimate Fighting Championship (UFC), where she has worked as an Octagon Girl since 2006. Arianny debuted in the spotlight at the tender age of four months. She grew up to be a determined young lady who was athletic as a child. By the time she enrolled in a degree program in Fitness Management and Nutrition at the University of Nevada, Las Vegas, she had previously been a gymnast, dancer, and cheerleader. Arianny is a co-host of Velocity TV’s ‘Overhaulin,’ in addition to her incredibly successful modeling career. She has been in and on the covers of publications such as ‘Playboy,’ ‘FHM,’ ‘FHM Australia,’ ‘Maxim US,’ ‘Maxim Philippines,’ ‘Maxim Korea,’ and ‘UFC,’ among others. She’s also known for being a health and fitness nut. She is a lifelong learner who devises her own workouts and diets. Through her blog, she enjoys sharing her knowledge and experience with friends and fans.

The Career of Arianny

In 2006, Arianny Celeste debuted as a UFC Octagon Girl at the Hard Rock Hotel and Casino in Paradise, Nevada. Arianny was named ‘Ring Girl of the Year’ at the inaugural World MMA Awards in 2008. She would go on to win the title four times in a row.

‘Maxim’ dubbed her ‘The Hottest UFC Octagon Girl after her third World MMA Award in 2010. She was placed 23rd on Maxim’s 2010 “Hot 100” list. In 2011, she was voted ‘Ring Girl of the Year’ for the fourth time, defeating Brittney Palmer in the World MMA event.

Arianny took home the award for the fifth time in a row in 2014. She had started her modeling career at the same time as her debut as a UFC Octagon Girl. ‘Playboy,’ ‘Maxim,’ ‘Sports Illustrated,’ ‘Fighter’s Only Magazine,’ and ‘FHM’ have all used her as a model.

‘Sports Illustrated’ named her ‘Lady of the Day in February 2010. Arianny Celeste is also a well-known television personality. She co-hosted seven episodes of Velocity Television’s ‘Overhaulin’ between 2014 and 2015.

Arianny was arrested in a hotel in Las Vegas on domestic violence charges on May 26, 2012. Praveen Chandra, her then-boyfriend, was charged with kicking him in the nose.

Praveen, on the other hand, choked her numerous times throughout their fight, according to her. She was released on a $3000 bond shortly after being arrested.

Penelope Lopez Marquez, better known as Arianny Celeste, was born on November 12, 1985, in Las Vegas, Nevada. She is of Mexican-Filipino ancestry and speaks Spanish fluently.

Palo Verde High School was her alma mater. She went on to the University of Nevada, Las Vegas, to earn a degree in Fitness Management and Nutrition.

She was a diligent worker and an athlete since she was a child. She excelled in gymnastics, dance, and cheerleading as a child.

She enjoys making up her own routines and experimenting with new foods. She got her big break as a model when she was 15 years old.

Arianny Celeste has an estimated net worth of $4 million. Her salary as a ring girl accounts for the majority of her earnings.