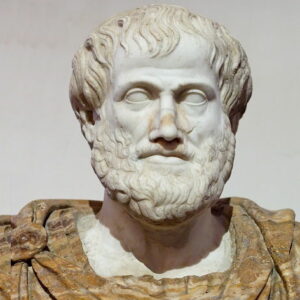 Aristotle was a Greek philosopher and scientist who was best known as Alexander the Great’s tutor. He was a Plato pupil and is regarded as a major figure in Western philosophy. He was considered far ahead of his time for his publications on physics, metaphysics, poetry, drama, music, logic, rhetoric, linguistics, politics, government, esthetics, ethics, biology, zoology, economics, and psychology. His works are the first comprehensive system of Western philosophy, encompassing morality and aesthetics, logic and science, politics, and metaphysics. Both Islamic and Christian scholastic thought relied on this structure for support. He was even considered to be the last man alive who knew everything there was to know at the time. His intellectual horizons encompassed every known branch of science and the arts at the time. One of his biggest achievements was establishing the Aristotelian syllogistic, a complete method of logical reasoning. Another important contribution he made was to the advancement of zoology. True, Aristotle’s zoology is no longer relevant, yet his work and contribution were unquestioned until the nineteenth century. His contributions to a variety of areas, as well as his influence, have made him one of the most well-known and influential people of all time.

Aristotle was born at Stagira, Chalcidice, about 55 kilometers east of Thessaloniki, around 384 BC. Nicomachus gave him the name Aristole, which means “best purpose.” His father was King Amyntas of Macedon’s personal physician.
Though little is known about his upbringing, reports indicate that he spent time at the Macedonian palace, where he became acquainted with the Macedonian royalty.
He was inspired by his father’s scientific work as a physician’s son, yet he had little interest in medicine.
He traveled to Athens when he was 18 years old to attend ‘Plato’s Academy.’ He left Athens sometime between 348 and 347 BC, following nearly 20 years in the city.
According to legend, he departed Athens because he was dissatisfied with the Institution’s course after Plato’s death, when Plato’s nephew Speusippus took over the academy. However, it is stated that he was afraid of anti-Macedonian attitudes and may have fled before Plato’s death.
Following that, he and his buddy Xenocrates went to the court of his friend Hermias of Atarneus in Asia Minor. He next journeyed to the island of Lesbos with Theophrastus, where they studied the island’s fauna and botany in depth.
After the death of Hermias in 343 BC, Philip II of Macedon persuaded him to become Alexander’s tutor.

Aristotle rose through the ranks of the Macedonian royal academy to become its dean. He became a tutor to not only Alexander, but also Cassander and Ptolemy, two other future rulers. In his function as Alexander’s tutor, he encouraged him to conquer the east.
He returned to Athens in 335 BC and founded his own school, the ‘Lyceum.’ He taught numerous courses at his institution for the next 12 years.
The connection between Alexander and Aristotle deteriorated at some point. Alexander’s friendship with Persia was most likely the reason behind this. Despite the lack of evidence, many people assumed Aristotle was involved in Alexander’s death.
Anti-Macedonian animosity erupted in Athens after Alexander’s death. Aristotle escaped to Chalcis, his mother’s family estate, after Eurymedon the Hierophant chastised him for not honoring the gods in 322 BC.

Aristotle is assumed to have compiled his ideas between 335 and 323 BC. During this time, he wrote a number of dialogues. Only parts of these works have remained, and they are in the form of treatises. These weren’t meant to be widely distributed; rather, they were intended to be utilized as student lectures. His most major treatises are ‘Poetics,’ ‘Metaphysics,’ ‘Politics,’ ‘Physics,’ ‘De Anima,’ and ‘Nicomachean Ethics.’
He not only studied practically every subject, but he also contributed to a number of them. Aristotle studied and wrote on astronomy, anatomy, embryology, geology, geography, meteorology, zoology, and physics under the heading of science. He wrote on ethics, aesthetics, government, politics, metaphysics, economics, rhetoric, psychology, and theology under the heading of philosophy. He also studied literature, poetry, and the customs of many cultures in addition to all of the above.
Aristotle studied and wrote about a wide range of subjects and topics, yet only about a third of his original works have survived. Poetry, letters, conversations, and essays written in a Platonic style are among the lost literature. The world is familiar with most of his literary works thanks to the writings of Diogenes Laertius and others.

His philosophy, like that of his teacher Plato, is aimed towards the cosmos, but his ontology seeks the universal in particular things, therefore his epistemology is based on the study of specific events that exist or occur in the world, leading to knowledge of essence. He also talked about how deduction and inference may be used to extract information from things. Modern philosophers evolved his theory of deduction into the term ‘Syllogism.’ He referred to the two statements as “Contraries.” A syllogism is a logical argument in which the conclusion is inferred from two or more premises of a particular type. In his work ‘Prior Analytics,’ he outlined the essential components of reasoning through exclusive and inclusive linkages. Later on, these were depicted using Venn Diagrams.
His philosophy was not just a system of logic, but also a system of ethics. In Nichomachean Ethics, he described a “moral rule of behaviour” that he referred to as “good life.”
He also discussed Practical Philosophy, in which he viewed ethics as a practical rather than academic topic. ‘Politics,’ his work, shed light on the metropolis. He considers the city to be a natural community. He added, “Man is by nature a political animal.”
He is credited as being the first person to study formal logic. In his work ‘The Critique of Pure Reason,’ the eminent philosopher Kant claimed that Aristotle’s logic theory was the foundation of deductive inference.

Though he was not a scientist by today’s standards, science was one of the areas in which he conducted substantial investigation and study, particularly during his time at the ‘Lyceum.’ He believed that interacting with actual items aids in the acquisition of knowledge.
He was also a biologist who did study. He divided animals into species based on their blood. Vertebrates were the most common animals having red blood, while bloodless species were known as ‘cephalopods.’ Despite the fact that this idea was rather inaccurate, it was widely accepted as the conventional system for many years.
He also studied marine biology in depth. He dissected marine creatures to study their anatomy. It’s worth noting that, unlike his biological classifications, his findings on marine life were spot-on.
His book ‘Meteorology’ demonstrates that he was likewise interested in earth sciences. He didn’t just mean the study of weather when he said meteorology; it also covered considerable research into the water cycle, natural disasters, astrological events, and other topics.

Many researchers regard Aristotle to be the genuine father of psychology since he created the theoretical and philosophical foundation that aided psychology’s early development.
His treatise ‘De Anima’ (On the Soul) is often regarded as the earliest psychological work.
He was concerned on the link between psychological processes and the physiological phenomenon that underpins them. He claimed that the mind is immaterial and everlasting, and that it may function without a body.
He proposed that cognition is divided into two parts: passive and active intellect.
Music, poetry, comedy, tragedy, and other arts, he claimed, were all imitations. He further stated that these impersonations varied in medium, style, and object. He believed that imitation was a natural element of human nature and that it was one of mankind’s greatest advantages over animals.

Aristotle wrote roughly 200 works, the most of which were notes and drafts. Dialogues, scientific observations, and systematic works are among these works. His disciple Theophrastus and then Neleus were in charge of these efforts.
‘Rhetoric’ and ‘Eudemus’ are two of his most famous works (On the Soul). Philosophy, Alexander, Sophistes, justice, money, prayer, and education were among the topics he wrote about.
His most major treatises are ‘Poetics,’ ‘Metaphysics,’ ‘Politics,’ ‘Physics,’ ‘De Anima,’ and ‘Nicomachean Ethics.’ The ‘Poetics’ work of Aristotle consisted of two books, one on tragedy and the other on comedy.

Aristotle married Pythias, who is claimed to be Hermias’ niece or adopted daughter, during his time in Asia Minor. The couple had a daughter, Pythias, whom they also named.
Following the death of his wife Pythias, he married Herpyllis of Stagira, with whom he had a son. Nicomachus was his father’s name, and he named his son after him.
Aristotle had an amorous relationship with Palaephatus, according to the Suda (a 10th-century Byzantine encyclopedia of the ancient Mediterranean world).
He died of natural causes in Euboea in 322 BC. Antipater, one of his students, was chosen as the principal executor before he died. He also left a will specifying that he wanted to be buried alongside his wife.

Despite the passage of time, Aristotle remains one of the most significant people in history. His contributions may be found in nearly every sphere of human knowledge at the time. He also pioneered a number of new fields.
He was a pioneer in the study of zoology as well as the founder of formal logic.
His successor at the ‘Lyceum,’ Theophrastus, wrote a series of botanical texts that were regarded the foundation of botany until the Middle Ages. Only a few of the plant names he mentioned have survived to the present day. ‘Lyceum’ rose from humble beginnings to become a Peripatetic school. Aristoxenus, Dicaearchus, Demetrius of Phalerum, Eudemos of Rhodes, Harpalus, Hephaestion, Mnason of Phocis, and Nicomachus were among the noteworthy students from the ‘Lyceum.’
His influence on Alexander is undeniable. Alexander used to take huge groups of botanists, zoologists, and researchers with him on his journeys because of his influence. In addition to Byzantine intellectuals, Islamic theologians, and Western Christian theologians, Aristotle impacted future scientists, philosophers, and thinkers.
He was also a proverbs, riddles, and folklore collector. His school focused on the Delphic Oracle’s riddles and Aesop’s stories.