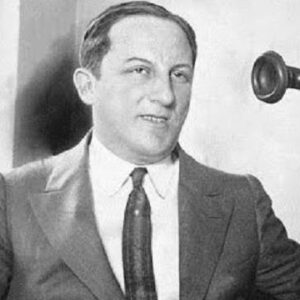 American entrepreneur, racketeer, and gambler Arnold Rothstein rose to prominence in the 1920s as the head of the country’s organized crime scene. He is recognized for turning the organized criminal syndicates’ hooliganism into profitable ventures. Additionally, he was known to be interested in gambling, rigging sports, and professional sports. He was thought to have been the driving force behind the 1919 World Series rigging. He had sophisticated commercial sensibilities as well. One of the first gangsters to anticipate financial success from Prohibition, Arnold gained millions from it. He was envious of his older brother, who his father held in high respect, despite being born and raised in a prosperous Manhattan household. He finally dabbled in gambling and amassed a large fortune, but it was always perilous working with crooks, and he had to pay with his life. Arnold was shot dead in November 1928 as a result of a massive debt he had accrued after losing a poker game a month earlier. Many movies, like “Eight Men Out” and “Mobsters,” have depicted Arnold’s life.

On January 17, 1882, Arnold Rothstein was born in Manhattan, New York, into a prominent Jewish business family. He grew up with an older brother and was the child of Abraham Rothstein and Esther. Abraham was regarded as one of the most esteemed people in his community and was frequently referred to as “Abe the Just,” which denoted a person of outstanding moral character who was also charitable.

Arnold was gifted with numbers from a young age, which contributed to his academic success in mathematics. He dropped out of high school at the age of 16 since he had absolutely no interest in any other academic topic. His older brother, who eventually went on to become a rabbi, was always given preference by his father.

Arnold began working as a traveling salesman for numerous businesses in an effort to fund his aspiration to start his own business. He enjoyed it at first, but soon became tired of it because it paid less and didn’t let him fully utilize his tactical abilities. Late in his adolescent years, he began to lean toward criminality. He recognized the potential in organized crime because they spent much of their time fighting among themselves and missing out on numerous lucrative economic opportunities.

Aside from his desire for a wealthy lifestyle, what drove him the most was the animosity he had for his family as a young adult. When his father urged him to stop gambling, he didn’t since he believed his parents didn’t love him enough. When Arnold was in his late teens, he was already turning a profit from gambling.
With the money he had amassed from winning cards and gambling over the years, at the age of 20, he had opened his own own casino. He rose to prominence in the New York gambling scene as a result of winning runs that were out of the ordinary and involved more than just “luck.” He benefited from his aptitude for mathematics.

The Life of Crime

He relocated to Manhattan’s Tenderloin in 1910, opened a casino there, and made a stake in a horse racing track in Maryland. He manipulated numerous races that he wagered on in order to increase his wealth. He had a very skilled and cunning team of operatives that handled all of his repairing work. Though what he did was unlawful, he gave them generous payments, and his methods lacked violence. He was one of the few millionaires in New York City by the time he was 30 years old.

He became well-known across the country as a result of the notorious 1919 World Series fix. His involvement was clear, and a variety of evidence pointed to him as one of the primary offenders. Arnold’s agents paid the Chicago White Sox players to lose to the Cincinnati Reds against their will. When the controversy broke, it brought the Sox widespread disgrace and became notoriously known as the “Black Sox Scandal.” Arnold became extremely wealthy.

He continued to indulge in horse racing betting and owned a racehorse by the name of Sporting Blood who won the Travers Stake in 1921. Additionally, that triumph occurred under very dubious circumstances and elevated Arnold’s status in the eyes of the law. But the fact that there were insufficient and reliable evidence against him prevented his conviction. Arnold adopted the monicker “Redstone Stable” for his wagering on the races.

Arnold saw a huge commercial potential in the early 20s prohibition era’s prohibition on alcohol. He got involved in drug trafficking, bootlegging, and the smuggling of alcohol from Canada and the Hudson River. Additionally, he held a variety of assets in numerous speakeasies. Throughout the years he was active, his main source of money was the unlawful sale of alcohol, which was prohibited due to the prohibition.

Because Arnold was a highly visible, intelligent, and educated criminal with excellent political ties, the authoritarian intrusion in his business was somehow lessened. Among other mafia bosses, his group had a number of notorious criminals, like Meyer Lansky and Charles Luciano. Arnold made an effort to get everyone on the same page by explaining how collaborating would be more beneficial. He effectively used the criminals as his puppets by politicizing them in some ways.

They persuaded the remaining New York minor and big gangs to get together as allies. He served as a go-between for the gangs and developed several monikers, including The Fixer, Mr. Big, The Brain, and The Big Bankroll. He made more money by charging a fair price for serving as a middleman between the gangs. He brought a large number of bodyguards with him when holding his meetings outside in public.

He spent a lot of time working with Tammany Hall, and he was acknowledged as one of the important figures that assisted them in seizing control of the city. He acquired other brothels and amassed yet another enormous fortune through prostitution. He received anything from 100,000 to half a million dollars for serving as a middleman between the gangs. Later, he was seen as a prosperous, business-minded drug dealer.

By the late 20s, after building up a sizable criminal empire, he was regarded as one of the most prosperous and well-known criminals in the city of New York. He continued to be the wealthiest bootlegger in the nation up until George Rumas overtook him. He amassed a self-made fortune of $10 million and is recognized as one of the founding members of the New York organized crime organization.

Arnold Rothstein couldn’t live a lengthy life, like most criminals do. He was fatally shot on November 4, 1928, while attending a meeting at the Park Central Hotel. It was claimed that a quarrel from a high stakes poker game that took place over three days in October was the cause of the murder. Arnold refused to pay the $320,000 he lost because he said the game was manipulated and his competitors had cheated.

At the time of his passing, Prohibition was at its height, and the delicately constructed empire he had created inevitably came crashing down. His “associates” split his empire into various pieces and seized control of it. Arnold’s brother declared his estate to be completely bankrupt and his substantial money to have vanished ten years after his death.

Some movies, like “The Great Gatsby,” “Eight Men Out,” and “Mobsters,” contain characters that were heavily influenced by Arnold Rothstein.

Rothstein was one of the wealthiest criminals in US history, with a claimed net worth of over $10 million (about $150 million in 2019). He is regarded as one of the country’s first organized crime figures.