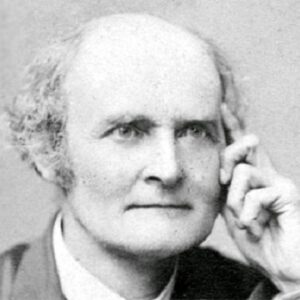 Arthur Cayley was a well-known British mathematician who was credited with helping to establish the British school of pure mathematics. He was born in England and spent his first eight years in Russia, where his father worked as a business agent. He was educated in a private school, then at King’s College School, and eventually at Trinity College, Cambridge, after the family returned to England. Despite receiving a Cambridge fellowship, he first chose not to pursue a career in academia, instead of becoming a well-known lawyer. However, he continued his involvement with mathematics and, at the age of 42, returned to the University of Cambridge to devote his life to the progress of mathematics, publishing over 1000 original articles. Cayley enjoyed reading literature and painting in addition to solving mathematical riddles. He enjoyed water coloring, which he found helpful when drawing mathematical diagrams. He enjoyed traveling as well.

Arthur Cayley was born in Richmond, Surrey, England, on August 16, 1821. Henry Cayley, his father, comes from a long line of Yorkshire ancestors. Arthur’s father was a commercial representative in St. Petersburg, Russia, at the time of his birth, but he had come to England for a short visit.

His mother, Maria Antonia nee Doughty, was of Russian descent, according to various biographers. Her father’s surname, William Doughty, suggests she was of English ancestry. Arthur was the third of five children born to the marriage.

Arthur spent his first eight years of life in Petersburg, where he was exposed to a variety of languages, including English, Russian, and French. The family returned to England permanently in 1829, living in Blackheath, which is now part of South East London.

Arthur was accepted into a private school in England, where he studied until he was fourteen years old. After that, in 1835, he began attending King’s College School. Young Arthur excelled in mathematics at both of his schools. He also excelled in science, obtaining awards in chemistry.

Henry Cayley wanted Arthur to join the family business because he was the oldest surviving son. Fortunately, the instructors at King’s College persuaded him that Arthur’s career in mathematics was brighter. Arthur Cayley enrolled at Trinity College, Cambridge, in 1838.

George Peacock, the author of the ‘Treaties on Algebra,’ was his tutor in the first year. He was also a student of William Hopkins. Linear transformations and analytical geometry were two of his favorite studies during this time.

Cayley began studying the writings of continental mathematicians such as Lagrange and Laplace after being inspired by Hopkins. At the age of twenty, these investigations resulted in the publishing of three papers in the ‘Cambridge Mathematical Journal.’ He also excelled in Greek, French, German, and Italian during this time.

Academic Career in the Beginning

Arthur Cayley received the Smith’s Prize for graduating as a Senior Wrangler from Cambridge in 1842. Following that, he was awarded a fellowship and began his work at the same institution. Despite the fact that he only stayed for four years, he had a very productive academic career during that time.

He worked on a wide range of issues at this time, including algebraic curves and surfaces, elliptic functions, determinants, and the theory of integration, among others. Furthermore, twenty-eight of his papers were published in the ‘Cambridge Mathematical Journal.’

‘On a theory of determinants,’ a paper he wrote in 1843, is particularly noteworthy. He applied the concept of a two-dimensional determinant to multidimensional arrays in this study. He did not, however, limit himself to publishing in local magazines.

He traveled to the Swiss Alps and Italy in 1844. As a result, he began to take an international perspective, publishing papers in the ‘Journal de Mathématiques Pures et Appliquées’ (France) and the ‘Journal für die reine und angewandte Mathematik’ (Germany) (Germany).

He published ‘On the Theory of Linear Transformations’ in 1845, which lay the groundwork for invariant theory. Despite his achievements, he decided to leave his academic career the next year.

At the time, joining the Holy Order was required to join the Cambridge University faculty, a step Cayley was unwilling to accept. Because his fellowship was about to expire in 1852, he decided to pursue another vocation, which he picked to be law.

He entered Lincoln’s Inn, London, in April 1846, where he specialized in conveyancing. He did not, however, completely abandon mathematics, and he maintained communication with Cambridge University scholars.

He also went to a lot of conferences, where he met many well-known mathematicians and formed close ties with them. He traveled to Dublin to attend William Rowan Hamilton’s quaternions lectures in the year he took his bar test, and he finally became friends with him.

During this time, he formed a close friendship with mathematician James Joseph Sylvester. At Cambridge, Sylvester was five years his senior, but he was now studying law and planning to become an actuary.

They talked about invariants and covariants while they walked around the Lincoln Inn courts. Later, the two collaborated and made significant contributions to invariant and matrix theory.

Cayley first entered the bar on May 3, 1849, and established his profession. Despite his great success in his field, he always saw it as a method of making money, and he spent his spare time composing mathematical articles, publishing over 250 between 1849 and 1863.

Return to the Classroom

Cayley had grown dissatisfied with his legal profession by the middle of the 1850s, and he began looking for a position in academia. In 1856, he applied for and was denied the chair of natural philosophy at Marischal College in Aberdeen.

As a result, starting in 1857, he began publishing thirty papers per year in order to increase his profile. He applied for the Lowndean Chair of Geometry and Astronomy at Cambridge in 1858 but was turned down again. Then, in 1859, he applied for and was denied the chair of astronomy at Glasgow University.

The reason for this could be because, despite his track record of publishing original works, he had little teaching experience. But his desire came realized in the early 1860s when the Sadleirian Professorship of Pure Mathematics was founded at the University of Cambridge, thanks to a sum donated by Lady Mary Sadleir.

The Sadleirian Professor’s job description included “explaining and teaching the fundamentals of pure mathematics and applying himself to the promotion of that science,” a profession that seemed tailor-made for Cayley. As a result, he became Cambridge’s first Sadleirian Professor in 1863, a position he retained until his death in 1895.

He suffered a significant financial loss as a result of the appointment; he now earns a fraction of what he did as an established lawyer. Despite this, he was glad to be back in the classroom.

Cayley’s lectures at Cambridge were primarily based on his research. Unfortunately, the kids found these to be of little help. As a result, his classes were constantly under-attended. Only those who have finished their preparation for competitive examinations were invited to hear him speak.

Cayley excelled in the other aspects of his employment, devoting his entire career to the promotion of mathematics. His unique study in this topic resulted in the publication of almost nine hundred papers covering every part of mathematics, in addition to a full-length book, ‘Treatise on Elliptic Functions (1876).

He was extremely passionate about women’s education, and he aided them directly by teaching at Girton College in Cambridge. He later became Chairman of the Council of Newnham College in the 1880s, and he was very interested in its success.

Cayley was invited to give a series of lectures at Johns Hopkins University in the United States in 1881. He gladly accepted the offer and spent the first five months of 1882 at Hopkins lecturing on Abelian and Theta Functions. The fact that Sylvester was a professor was an extra bonus.

At the request of the Cambridge University Press, he began assembling his mathematical publications in 1889. They were eventually published in thirteen quarto volumes, seven of which he edited. Others were edited afterward by Andrew Forsyth, his Sadleirian Chair replacement.

In addition, he supported other academics in their literary endeavors. He contributed Chapter 6 to Peter Guthrie Tait’s ‘An Elementary Treatise on Quaternions’ (1890) and wrote ‘The Principles of Book-Keeping by Double Entry’ (1894).

The originator of the British school of pure mathematics, Arthur Cayley, is best known. He was the first to define the present concept of the algebraic structure known as a ‘group,’ which he published in his 1889 work titled ‘On the theory of groups.’

Cayley’s 1845 work, ‘On the Theory of Linear Transformations,’ is likewise well-known. It contained his seminal work in the development of ‘invariant theory.’

Another of his well-known works is the Cayley-Hamilton Theorem. Every square matrix, he claimed, is a root of its own characteristic polynomial. He also validated it for matrices of orders 2 and 3 with William Rowan Hamilton.

The Royal Society of London awarded Arthur Cayley the Royal Medal in 1859 for “his mathematical papers published in the Philosophical Transactions, as well as in several English and foreign periodicals.”

In 1882, the Royal Society of London awarded him the Copley medal for “his very profound and extensive investigations in pure mathematics.” “..

He was elected an honorary fellow of Trinity College in 1872 and an ordinary fellow in 1875.
He was a fellow at various academic institutes in Berlin, Göttingen, St Petersburg, Milan, Rome, Leyden, Upsala, and Hungary, and was an honorary foreign member of the French Institute.

Cayley was the President of the London Mathematical Society from 1868 to 1870, and the editor of the Royal Astronomical Society’s magazine from 1859 to 1881. He was elected President of the British Association for the Advancement of Science (BAAS) in 1883.

Arthur Cayley married Susan Moline of Greenwich on September 8, 1863. Robert Moline, her father, was a country banker. They eventually settled down in Cambridge and lived a peaceful and happy life.

The couple had two children: Henry, a son, and Mary, a daughter. Henry Cayley went to Cambridge to study mathematics, but after realizing that he would never be able to live up to his father’s renown, he dropped out and became an architect.

Cayley died on January 26, 1895, following a terrible abdominal disease that he had experienced from near the end of his life. He was 73 years old at the time, and his wife and children survived him. He is interred in Cambridge’s Mill Road Cemetery.

His legacy is carried on by a number of mathematical terminologies named after him. Some of these are Cayley’s theorem, Cayley’s formula, Cayley–Bacharach theorem, Cayley–Dickson algebras, Cayley graph, Cayley number, and so on.

Cayley is the name of a minor lunar impact crater found in the Mare Tranquillitatis area of the moon.

In his 1878 paper titled ‘On the Game of Mousetrap,’ Cayley introduced the card game ‘Mousetrap.’ The ‘Quarterly Journal of Pure and Applied Mathematics’ published it.

Arthur’s main source of income is as a scientist. We now lack sufficient information about his family, relationships, childhood, and other aspects of his life. His net worth is believed to be $1 million.