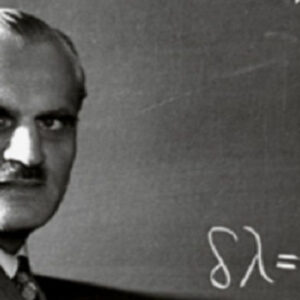 Arthur Holly Compton was a famous American physicist who first became known for his groundbreaking discovery of the Compton Effect, for which he also won the Nobel Prize in Physics. Electromagnetic radiation is both a wave and a particle, and this discovery proved that. Thomson was interested in astronomy at first, but then he changed his mind and started to study quantum physics. He began his research at Cambridge University’s Cavendish Laboratory. It was this research that led to the discovery of the Compton Effect. Later, when the Second World War was going on, Compton was put in charge of the Metallurgical Laboratory of the Manhattan Project. Compton was a key part of the Manhattan Project, which made the world’s first nuclear weapons. He was also the leader of Washington University in St. Louis as its Chancellor. Under his leadership, the University made great academic progress. It officially desegregated its undergraduate divisions, hired its first female full professor, and enrolled a record number of students. Even after he stopped being Chancellor, he kept working until 1961 as a Distinguished Service Professor of Natural Philosophy. Compton received many awards and honors during his life for what he did for science.

Arthur Compton was born to Elias and Otelia on September 10, 1892, in Wooster, Ohio. He came from a family of scholars. His dad was the dean of the University of Wooster, and both of his brothers, Karl and Wilton, went to and got PhDs from Princeton University.

Compton was more interested in astronomy when he was younger. In 1910, he took a picture of Halley’s Comet.
In 1913, he went to Wooster University and got a Bachelor of Science. Compton got his Master of Arts from Princeton University a year after he graduated from high school. In 1916, he got his Ph.D. in Physics.

In 1916 and 1917, Arthur worked as a physics teacher at the University of Minnesota. As a research engineer for the Westinghouse Lamp Company for the next two years, he worked on making sodium lamps better. During the First World War, Compton worked for the Signal Corps to make instruments for planes.

In 1919, Compton was one of the first two students to get a fellowship from the National Research Council that let them study abroad. He chose to work with George Paget Thomson at Cambridge University’s Cavendish Laboratory, where he studied X-ray scattering and Gamma-Ray Absorption.

In 1920, he went back to the U.S. and was put in charge of the physics department at Washington University in St. Louis.

He found the “Compton Effect” in 1922, which proved that electromagnetic radiation is both a wave and a particle.
The Physical Review published Compton’s paper on X-ray shifts in 1923. In the same year, he became a Physics Professor at Chicago University.

He worked for General Electric in 1926. He helped out the Lamp department as a consultant. His first book, called “X-Rays and Electrons,” came out the same year.
Arthur Compton became interested in the Earth’s cosmic rays between 1930 and 1940. He led a study of how the strength of cosmic rays changes around the world.

In 1941, Compton was put in charge of the National Academic Sciences Committee (NASC). The committee looked at how atomic energy could be used in the military. The well-known Manhattan Project was made possible by the work of the committee.

In 1942, he was put in charge of the Metallurgical Laboratory of the Manhattan Project. He was given the job of making nuclear reactors to turn uranium into plutonium, figuring out how to separate plutonium from uranium, and designing an atomic bomb.

After World War II ended, Compton quit his job as a professor of physics at the University of Chicago and became the chancellor of Washington University in 1946.

In 1954, Compton quit his job as the head of Washington University. But he kept working until 1961 as a Distinguished Service Professor of Natural Philosophy.

In 1922, Arthur Compton did his most important work when he found out about the Compton Effect. Electromagnetic radiation is both a wave and a particle, and this discovery proved that.
In 1942, he was an important part of the Manhattan Project, which led to the first nuclear weapons ever made.

Compton and C.T.R. Wilson were both given the Nobel Prize in Physics in 1927. He won the prize for finding the Compton Effect, which proved that electromagnetic radiation has both wave and particle properties.

He got the Matteucci Gold Medal in 1930 for finding the Compton Effect.
In 1940, he was given the Benjamin Franklin Medal and the Hughes Medal of the Royal Society. These medals were given to him because of how much he did for science.

In 1916, he took Betty Charity as his wife. The charity was in his Wooster University class with him. Arthur Alan and John Joseph Compton were the couple’s two sons.

He died in Berkeley, California, on March 15, 1962, when he was 69 years old. He died of a brain bleed and was laid to rest in the Wooster Cemetery in Ohio.

The “Compton Crater” on the Moon is named after Arthur Compton and his brother Karl.
Arthur Compton is also remembered by the name of the Compton Gamma Ray Observatory at NASA.

Arthur Compton’s estimated net worth is $4 million, and he makes most of his money from teaching at universities and working as a theoretical physicist, nuclear scientist, and physicist. We don’t know enough about Arthur Compton’s cars or his way of life.

Arthur Holly Compton wanted to work in religion after he finished his PhD.
Arthur, Karl, and Wilson Compton were the first three brothers to all get PhDs from Princeton.