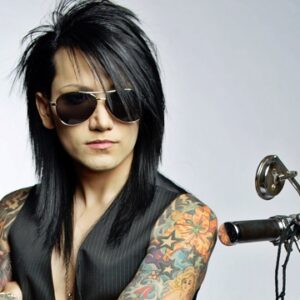 Ashley Purdy is a bassist and vocalist for Black Veil Brides, a rock band from the United States (BVB). Prior to joining BVB, he had been in several different bands like Orgasm, Stolen Hearts, and Children of the Beast. He joined BVB in 2009 after responding to an ad placed by Andy Biersack, the band’s founder. ‘We Stitch These Wounds’ (2010), ‘Set the World on Fire’ (2011), ‘Wretched and Divine: The Story of the Wild Ones’ (2013), and ‘Black Veil Brides’ (2014) are the band’s four studio albums since then (2014). MTV’s ‘Favorite Breakthrough Band of 2011’ award went to the band. Black makeup, body paint, tight black studded clothing, and long hair distinguish the band members, all of which are inspired by 1980s glam metal bands like KISS and Mötley Crüe. Purdy isn’t just a performer in his band; he’s also a graphic designer who helped sketch out each band member’s costume and developed the brand’s products. He’s also designed the stage outfits for every band he’s ever been a part of. Ashley Purdy Fashion Inc. is his own fashion label.

Ashley Abrocket Purdy was born in California on January 28, 1984. Early in his youth, he lost both of his parents. He moved to a small town in Missouri, where his grandparents raised him. He attended a nearby high school where he was kind of a misfit as he was really different from the other students. Fortunately for him, unlike many of his future band mates who were bullied for being different, his distinctiveness made him cool among his classmates.

He was passionate in the arts, music, and fashion, and he also participated in sports. He grew up with his grandparents until he was 18 years old, when he relocated to Los Angeles to pursue a career in graphic design. He was accepted to the San Francisco Academy of Art, but was later moved to Otis College of Art and Design in Los Angeles. His college projects centered on fashion and advertising, and he went on to earn a BFA in Communication Design with a Marketing and Advertising specialization.

Ashley Purdy’s path to becoming Black Veil Brides’ bassist is a fascinating one. He came to Los Angeles with the intention of becoming a graphic designer. However, he has always been interested in music and has always sought out people that are unlike him in order to start his own band. Unfortunately, when he discovered people who looked like him, they lacked musical talent; and if he was fortunate enough to meet skilled people, he would have to dress them up in the way he desired. He constantly struggled with “mish-moshed bands,” as he put it.

He happened to see a craigslist ad for a bass player from Black Veil Brides frontman Andy Biersack. He planned to meet with Biersack with the covert purpose of snatching members from Biersack’s band to start his own band, based on their shared interests and influences. He eventually opted to stay with Black Veil Brides since he liked the atmosphere of his new band. He joined the band in 2009, and their debut album, ‘We Stitch These Wounds,’ was released on July 20, 2010. It sold over 10,000 copies in the first week, and ranked at No. 36 and No. 1 on the ‘Billboard’ Top 200 chart and the ‘Billboard’ Independent chart respectively.

Ashley Purdy is a certified graphic designer with experience in fashion design and marketing, in addition to being a successful musician and performer. Having his own lifestyle brand was a desire he had for a long time but was unable to realize due to a lack of time. In early 2013, he finally put his skills to good use by starting Ashley Purdy Fashion Inc., his own apparel business. He stated in an interview that he conceptualizes and handcrafts every item he offers, from silk-screening to stitching and customizing.

During his early career, he was in a relationship with Kina Tavarozi, a model. They later broke up, but they are still friends. In 2015, he was photographed cuddling close to pornographic star Nikki Benz, causing outrage among his social media followers. In fact, he deactivated all of his social media accounts during this time to avoid constant criticism from his fans. He then clarified on social media that he was not dating Benz and that they were simply friends.

Ashley Purdy’s net worth is estimated to be between $1 and $5 million at the age of 35, according to Wikipedia, Forbes, IMDb, and other online sources. He made a living as a professional bassist. He’s from Missouri.