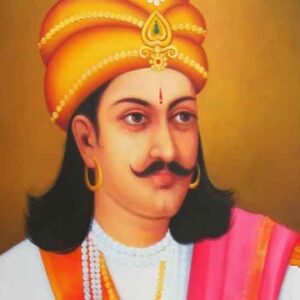 Ashoka, often known as ‘Ashoka the Great,’ was the Mauryan Empire’s third monarch and one of India’s greatest emperors, ruling over nearly the whole Indian subcontinent. He is significantly responsible for the propagation of Buddhism throughout the world. He grew up to be a terrifying monarch with a desire to perpetually extend his dominion, which spanned the Indian subcontinent save for the southernmost areas of Tamil Nadu and Kerala. However, it was the conquest of Kalinga, which was regarded as the bloodiest and most lethal, that broke him and turned him from a ruthless angry tyrant to a gentle and non-violent emperor. He erected countless stupas and pillars throughout his kingdom, the most famous of which is the Ashoka Pillar, which houses the Lion Capital of Ashoka, which is now India’s national emblem. Furthermore, his Ashoka Chakra, which is written on many of his relics (the most famous of which are the Lion Capital of Sarnath and the Ashoka Pillar), is in the center of the Indian national flag. Ashoka’s reign is regarded as one of the most illustrious periods in Indian history. Even though Buddhism died out in India after his death, it thrived and spread in other parts of the world, particularly in eastern and south-eastern Asia.

In 304 BC, Devanampriya Priyadarshi Samrat Ashoka was born in Pataliputra (near modern-day Patna) to Bindusara, the Mauryan Dynasty’s second emperor, and Maharani Dharma.
He was the grandson of Chandragupta Maurya, the founder of the Mauryan Dynasty, and had other half-brothers through his father’s previous marriages.
He was born into a royal family and has had royal military training since childhood. He was also a skilled hunter, as evidenced by his ability to kill a lion using only a wooden rod.

He was sent to quell disturbances in the empire’s Avanti region, and he was seen as a fearless and merciless military officer.
After defeating the insurrection in Ujjain, he was named Viceroy of Avanti province in 286 BC.
His father requested that he assist heir-apparent Susima in quelling a mutiny at Taxila, which he did successfully, earning him the title of Viceroy of Taxila. Later, he is reported to have dealt with and suppressed a second insurrection at Taxila.
Following the death of his father Bindusara in 272 BC, Ashoka and his half brothers engaged in a two-year struggle. To gain the kingdom, he killed his 99 brothers, sparing only Vitashoka or Tissa, according to the Buddhist books Dipavansa and Mahavansa.
He ascended the throne in 272 BC, but had to wait four years for his consecration as the Mauryan Empire’s third monarch in 269 BC.
His father’s ministers backed him up, particularly Radhagupta, who played a key role in his victory and was named Prime Minister after Ashoka became Emperor.
During the first eight years of his rule, he was continuously at war, attempting to expand his kingdom across the Indian subcontinent, including Iran and Afghanistan in the west and Bangladesh and the Burmese border in the east.
He was successful in conquering the Godavari-Krishna basin and Mysore in the south, but he was unsuccessful in acquiring the southernmost regions of Tamil Nadu, Kerala, and Sri Lanka.
Despite the fact that Ashoka’s forefathers presided over a vast empire, the kingdom of Kalinga on India’s northeast coast (present-day Odisha and North Coastal Andhra Pradesh) was never conquered by the Mauryan Empire. This was something Ashoka intended to change, so he invaded Kalinga to do so. Over 100,000 soldiers and civilians were killed in the Kalinga war, while over 150,000 were exiled. Ashoka was so appalled by the large-scale killing of mankind that he resolved never to battle again and began practicing nonviolence.
According to Buddhist accounts, he was so captivated by Buddhist teachings that he became a Buddhist and declared Buddhism to be his state religion.
He issued a series of edicts outlining the fundamentals of policy formulation in his kingdom. These were announced via edicts and inscriptions on pillars and rocks in local dialects.
To propagate Buddhism, Buddhist monks were dispatched to Afghanistan, Syria, Persia, Greece, Italy, Thailand, Vietnam, Nepal, Bhutan, Mongolia, China, Cambodia, Laos, and Burma, among other places.

In 261 BC, he attacked Kalinga to expand his Empire and successfully conquered it, only to be surprised by the immense loss wrought in terms of both property and human life.

He is reported to have erected 84,000 stupas for Buddhist monks across South Asia and Central Asia to house Buddha’s relics and serve as places of meditation.
His ‘Ashoka Chakra,’ or ‘wheel of justice,’ was adopted into the Indian flag and can be found inscribed on various Mauryan Emperor relics (the most famous of which are the Lion Capital of Sarnath and the Ashoka Pillar).
The Ashokstambha, or pillar edicts, were erected in all areas bordering the Mauryan Empire, stretching as far as Nepal, Pakistan, and Afghanistan, however only 10 of them have survived to this day.
He oversaw the creation of the Lion Capital of Ashoka, a monument of four lions standing back to back atop the Ashoka pillar in Sarnath (Varanasi, Uttar Pradesh). It is India’s national symbol. The Lion Capital is on display in the Sarnath Museum, but the Ashoka pillar, also known as the Ashoka column, remains in its original place.
He directed the construction of stupas such as Dhamek stupa, Bharhut stupa, Sannati stupa, Butkara stupa, Barabar Caves, Mahabodhi Temple, and Sanchi, as well as ‘viharas’ or academic hubs like as Nalanda University and Taxila University.

He met and fell in love with its princess, Kaurwaki, while in exile in Kalinga for two years to escape his brothers’ hostility, both unconscious of each other’s true identities. Later, they married in secret.
He met Vidisa Mahadevi Sakya Kumari (Devi) from Vidisha while being treated for his injuries at Ujjain, and they eventually married. The couple had two children: Mahendra, a son, and Sanghamitra, a daughter.
He is said to have had other wives in addition to Kaurwaki and Devi. Padmavati, Tishyaraksha, and Asandhimitra were among them, and he had multiple offspring with each of them.
His sons, Mahendra and Sanghamitra, were instrumental in the establishment and spread of Buddhism in Ceylon (present-day Sri Lanka).
Despite encouraging his subjects to follow Buddhist beliefs and practices, he allowed other religions like as Jainism, Zoroastrianism, Ajivikaism, and Greek polytheism to flourish throughout his realm.
He was a steady and merciful monarch who cared for his people when he died in 232 BC at the age of 72.