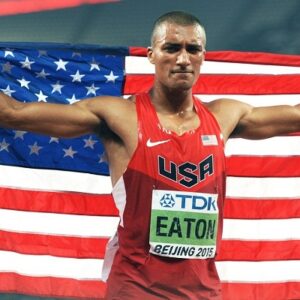 Ashton Eaton is a two-time Olympic champion from the United States who owns the world record in both the decathlon and the indoor heptathlon. With 9,039 points, he is only the second decathlete (after Roman ebrle) to cross the 9,000-point barrier. He was a highly successful athlete who won the decathlon gold medal at the 2012 Summer Olympics in London, and then defended his Olympic title by winning the decathlon gold medal in Rio in 2016. Eaton, who has always been interested in athletics, began participating professionally in the decathlon and heptathlon in 2008. In 2008, he qualified for the US Olympic trials but was unable to compete due to a fifth-place result. But, during the next few months, he worked extremely hard to win the heptathlon at the NCAA Championships in 2009 and 2010. He eventually made his Olympic debut at the 2012 Summer Games in London, when he won gold in the decathlon. He went on to win several international championships over the years, as well as his second Olympic gold medal at the 2016 Olympic Games in Rio. With this achievement, he joined Bob Mathias of the United States and Daley Thompson of the United Kingdom as the only men to win two Olympic gold medals in the decathlon.

Ashton James Eaton, the sole child of Roslyn Eaton and Terrance Wilson, was born on January 21, 1988, in Portland, Oregon, United States. His mother is Caucasian, while his father is African-American. Both his maternal grandfather and father were football players. His mother was a dancer and an athlete.

When he was a toddler, his parents divorced, and he was reared by his single mother. As a schoolboy, he began competing in football, basketball, running, soccer, and wrestling, inheriting his family’s love of sports.
In track and field, he was coached by Tate Metcalf and John Nosler at Mountain View High School. He won the state high school 400-meter dash in 48.69 seconds and the long jump with a leap of 7.3216 meters in 2006.
He had acquired a great interest in decathlon by the time he graduated from high school and picked the University of Oregon, which offered him a partial decathlon scholarship.

Dan Steele, the associate director of track and field and a former decathlete, was Ashton Eaton’s first coach at Oregon, and he helped the young man considerably enhance his performance in the 1500 meters, high jump, hurdles, and pole vault.

In 2012, he won the gold medal in the heptathlon at the IAAF world indoor championships. He did well in the US decathlon trials for the 2012 London Olympic Games, breaking the world record with a total of 9,039 points. Expectations were high for him going into the games, and he did not disappoint, winning the decathlon gold medal with 8,869 points at the London Games.
Continuing his incredible form, he went on to win the 2013 global decathlon title in Moscow with an 8809-point performance.

Then, in Sopot, Poland, he won gold in the Heptathlon at the 2014 IAAF World Indoor Championships.
He won the World Championships in the decathlon in 2015, breaking his own world record with a performance of 9045 points in Beijing.

He competed in the 2016 Summer Olympics in Rio, where he won gold in the two-day, 10-event decathlon for the second time with a score of 8,893 points. Ashton Eaton joined US Olympian Bob Mathias and Great Britain’s Daley Thompson as the only men to win two gold medals in the decathlon after winning gold at both the 2012 and 2016 Olympic Games.

Ashton Eaton is only the third guy in Olympic history to win the decathlon gold medal twice. He won it in the London Olympics in 2012 and the Rio Olympics in 2016.
In 2010, he received the Bowerman Award, which is the highest honor given to the finest student-athlete in American collegiate track and field for the year.

Hton Aton has an estimated net worth of over $10 million as of January 2022. He has fueled his fortune by remaining at the top of his game and winning gold for his country. Ttlе аlо hеlреd him mаkе а fеw еxtrа thоuаnd, such as being associated with the country’s hаmроn.