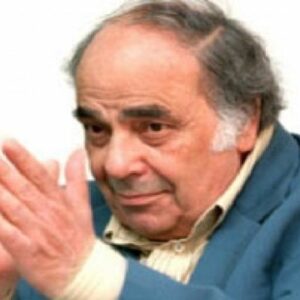 Assi Rahbani was a Lebanese composer, musician, lyricist, playwright, and poet whose numerous musical and theatrical works contributed to the western world’s awareness of the work of Arabian artists. He began his career as a writer and producer of songs and sketches about life in Lebanon for Lebanese radio theater. He formed the ‘Rahbani Brothers’ with his younger brother Mansour and the Lebanese singer Fairuz, whom he later married, and pioneered a unique and distinctive style of musical theater by fusing opera, poetry, folklore, and culture. This unique fusion of sentimentality and patriotism was aimed not only at delighting Lebanese audiences, but also at attracting international attention. They performed at ‘Carnegie Hall’ and became an international sensation, leveraging their musical and cultural clout to help launch the careers of numerous emerging Arabian artists. The ‘Rahbani Brothers’ are widely regarded as pioneers of a distinctive style of music, and their contributions to the world of musical theater are studied at prestigious universities today. Along with his musical career, he wrote and directed numerous plays, television productions, and musicals with the assistance of his family and other Arabian artists. By the end of his career, he had established himself as a sought-after producer and composer, having been involved in hundreds of successful projects.

Assi Rahbani was born in Antelias, Lebanon, on May 4, 1923. He co-founded the musical group the ‘Rahbani Brothers’ with his younger brother Mansour.

Rahbani began his musical career as a DJ for ‘Lebanese Radio’ and later ‘Near East Radio’. It was there that he met a singer named Nouhad Haddad, who was a member of the radio station’s chorus at the time but would later become known as Fairuz.

Nouhad was chosen from the chorus by the station’s musical director in 1951, and Rahbani composed a song for her to sing. Following their initial recording session, he was commissioned to compose several additional songs for her. The trio produced over 50 songs for the station with the assistance of Rahbani’s brother.

The trio left the ‘Near East Radio’ station in 1956 during the ‘Suez Crisis’ and began writing and recording songs independently. Assi and Mansour collaborated on songs and lyrics, and the trio began to gain traction through collaborations with other artists.

In 1957, the ‘Rahbani Trio’ appeared at the ‘Baalbeck International Festival,’ a cultural musical event held in the ‘Roman Acropolis. It was the first appearance of indigenous artists at the international festival.

The ‘Rahbani Brothers’ collaborated on plays, musicals, and theater productions while also continuing to broadcast their music via radio and television. The majority of these plays were based on straightforward patriotic themes intended to appeal to the Lebanese public, and they featured nostalgic village life and the innocence of youth love and maturation.

By the 1960s, the Rahbani Brothers and Fairuz had established themselves as one of the most recognizable and popular bands in Lebanon and the Middle East, and were highly sought after musical figures, with many Arabian artists requesting collaboration.

They began writing, directing, and acting in theatrical and television productions in addition to their music. Fairuz appeared in a number of these films, and Rahbani appeared alongside her in two Lebanese films.

The trio enjoyed the success of international music stars in the 1970s. They inspired a large number of protégés and catapulted the careers of a number of young Arab singers in the western world.

Assi Rahbani contributed to the development of a musical theater style that is still considered unique in many ways.

His operatic and poetic works addressed subjects ranging from history and folklore to sociopolitical issues and the future of his people and country.

The ‘Rahbani Singing Theatre’ toured extensively throughout the world, introducing a new generation of Arabian singers and musicians to a global audience. Their work is incorporated into the theater curricula of numerous prestigious universities, including Harvard and Oxford.

Following his demise, his group returned to the Baalbeck International Festival and revived a number of their previous musicals. They performed to a sold-out crowd, and at the show’s conclusion, Fairuz sang to the late Assi in tribute to his musical legacy.

Apart from their decades-long collaboration with singer Fairuz, Assi Rahbani was also her husband. In 1954, the two married and had a son and a daughter together.

Rahbani suffered a brain hemorrhage on September 22, 1972, and required three surgeries to save his life. While the hemorrhage was stopped, his strenuous job began to take a toll on his mental health, and his marriage began to deteriorate.

Fairuz and the Rahbani brothers ended their partnership in 1979, and Fairuz and Assi split up. Following their split, the ‘Rahbani Brothers’ continued their distinctive musical collaborations with other performing artists.

After several weeks in a coma, Assi Rahbani died on June 26, 1986, and the nation went into mourning. He is buried in East Beirut, and the area’s warring factions called a ceasefire to allow his funeral procession to pass through checkpoints without being stopped.

The net worth of Assi is unknown.

While this eminent musician was hospitalized for a brain hemorrhage, his fans gathered outside the hospital to pray for his recovery. His eldest son and younger brother stepped in to direct the musical he was directing at the time, and he recovered in time to attend the performance.