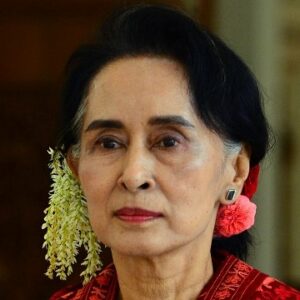 Aung San Suu Kyi, the rising and shining face of Burma’s (now Myanmar) claim to democracy and human rights, is one of the country’s most renowned political leaders as well as one of the world’s most prominent political prisoners. Suu Kyi was born in Rangoon, where her father founded the modern Burmese army and her mother served as the country’s ambassador to India and Nepal. Suu Kyi was exposed to a variety of political and religious viewpoints from a young age, which impacted her opinions and values. Suu Kyi’s life was turned upside down when an unforeseen sequence of events thrust her into the spotlight and put her at the forefront of Burma’s quest for freedom and democracy. Suu Kyi is a founder member and chairman of the National League for Democracy, a Burmese political party dedicated to human rights and democracy. Suu Kyi has been a vocal opponent of military rule and dictatorship in Burma since entering the political arena, and she has worked tirelessly to bring the country into the ranks of the world’s democratic nations. For the same reason, she has spent more than 15 years in prison, the most of which was spent under house arrest. Suu Kyi has received support from a number of countries throughout the world, including the United States, the United Kingdom, Europe, and others. She has received significant prizes such as the Nobel Peace Prize and the Congressional Gold Medal for her tireless efforts to overthrow the government in Myanmar and establish democracy via peaceful methods.

Aung San Suu Kyi was born in Rangoon, Burma, the daughter of former de facto Prime Minister Aung San.
Aung San Suu Kyi was raised by her mother after her father was assassinated. Her two brothers, one of whom died and the other of whom went to San Diego, California, were her only siblings.
Methodist English High School was where she received her primary education. It was at this point that her proclivity for learning new languages became apparent.
Suu Kyi was exposed to a variety of political viewpoints and religions as a result of her upbringing in a political family. In 1960, her mother, Khin Kyi, was appointed Burmese ambassador to India and Nepal.
Suu Kyi and her mother immigrated to India, where she completed her secondary school at the Convent of Jesus and Mary School. In 1964, she earned a bachelor’s degree in politics from Lady Shri Ram College.
Suu Kyi then proceeded to the United Kingdom, where she earned a B.A. in Philosophy, Politics, and Economics from St Hugh’s College, Oxford, in 1969.
She began her career with the United Nations as a writer on budget issues, a position she held for three years.
Suu Kyi worked as a research student at the School of Oriental and African Studies in London from 1985 to 1987, pursuing an M.Phil in Burmese literature.

Come back to Burma.

Suu Kyi returned to Burma in 1988 with the intention of caring for her ailing mother. This shift proved to be a watershed moment in Suu Kyi’s life, as she got more involved in the pro-democracy struggle.
General Ne Win, Burma’s military leader and the head of the ruling party, resigned, sparking a wave of pro-democracy protests. On August 8, 1988, the public demonstrated in large numbers, demanding democracy and independence, but the military forcefully crushed them.
Suu Kyi spoke during a demonstration in front of the capital’s Shwedagon Pagoda, demanding for a democratic government. This, however, was in vain, as the military coup seized power.
On September 27, 1988, Suu Kyi entered politics and founded the National League for Democracy (NLD) to overthrow the military’s authoritarian regime. Her party was based on Mahatma Gandhi’s nonviolence ideology and Buddhist principles.
Suu Kyi gave countless speeches fighting for freedom and democracy while serving as the General Secretary of the National League for Democracy.
She was placed under house arrest on July 20, 1989, and was given release only if she fled the country.
In 1990, the regime was obliged to organize a general election due to mounting domestic and international pressure. The election results reflected the desires of Burmese society, with the NLD party receiving a landslide 59 percent of the vote, ensuring the party 80 percent of parliament seats.
Despite the fact that Suu Kyi was qualified for the position of Prime Minister, the elections were annulled and the military took over, causing an international outrage.
Aung San Suu Kyi has been placed under house arrest. She received the Sakharov Prize for Freedom of Thought and the Nobel Peace Prize during this time. While her two boys accepted the award, she used the funds to establish a health and education trust for the Burmese people. In July 1995, Aung San Suu Kyi was released from house imprisonment.
Suu Kyi was attacked by 200 men carrying metal chains, metal batons, stones, and other weapons in 1996 while traveling along with other National League for Democracy leaders Tin Oo and U Kyi Maung.
Throughout her political career, Suu Kyi has been held under house arrest on several times, preventing her from meeting with supporters and overseas visitors. Suu Kyi’s family and the media were also barred from visiting her. Suu Kyi was accused of jeopardizing communal peace and stability, according to the administration.
Over the years, the UN has worked hard to facilitate a conversation between the military and Aung San Suu Kyi. It has, however, failed to produce any positive results.
Suu Kyi’s petition to be given the Universal Declaration of Human Rights by the United Nations was likewise unsuccessful, as the military maintained that providing Suu Kyi with protection in her own interests was preferable to house arrest.
After a successful visit by UN diplomats and US President Barack Obama in 2009, the Burmese government announced the release of all political prisoners, including Aung San Suu Kyi. The ambassadors also emphasized the importance of encouraging the Burmese to reform democratically in exchange for economic assistance and international aid.
Suu Kyi’s release date has been set for November 13, 2010. Meanwhile, she was allowed to meet with top members of her NLD party in the State House prior to that. She also met with a number of heads of state. Later in Life Suu Kyi’s release drew a swarm of supporters to her house in Rangoon. Kim Aris, her son, paid her a visit, the first time he had seen her in ten years. Later that year, Kim returned to Burma twice, each time accompanying Suu Kyi on her trips to Bagan and Peru.
The NLD stated in 2011 that it will re-register as a political party in order to contest 48 by-elections caused by the ascension of legislators to ministerial rank.
Suu Kyi met Thai Prime Minister Yingluck Shinawatra in the same year, which was momentous because it was her first encounter with a foreign leader.
Suu Kyi was elected to Parliament in 2012. Suu Kyi’s party, the National League for Democracy, also won 43 of the 45 contested seats, making her the formal Leader of the Opposition in the lower house.
Suu Kyi, along with other NLD MP elects, took their oaths and assumed office on May 2, 2012. She made her debut appearance in Parliament as a politician two months later, on July 9, 2012.
On June 6, 2013, Suu Kyi announced her intention to run for President of Myanmar in the 2015 election on the website of the World Economic Forum.

She is Burma’s most powerful politician and the world’s most well-known political prisoner, having fought tirelessly for Burmese people’s freedom and human rights against military dictatorship. In 1991 and 2012, she received the coveted Nobel Peace Prize and the Congressional Gold Medal, the highest civilian honour in the United States, for the same.
She is a founding member of Burma’s National League for Democracy (NLD) and its chairperson.

“For her nonviolent battle for democracy and human rights,” she received the Nobel Peace Prize in 1991.

Throughout her life, Aung San Suu Kyi has been bestowed with a number of titles. Doctor Honoris Causa from Vrije Universiteit Brussel and Université catholique de Louvain, Honorary Doctorate in Civil Law from St Hughs College Oxford, and Honorary Fellow from the School of Oriental and African Studies are only a few of them. She was an honorary member of The Elders, a group of illustrious world leaders gathered by Nelson Mandela. She did, however, resign from her position after being elected to parliament. In 2008, she was made an Honorary Member of the Club de Madrid. Since her incarceration, she has served on the honorary boards of International IDEA and ARTICLE 19.
In 2011, Suu Kyi met with Francois Zimeray, France’s Human Rights Ambassador.

Dr Micheal Aris, a Tibetan culture specialist, and Aung San Suu Kyi married in the year 1971. While working for the United Nations, she met him.
Alexander Aris and Kim were born to the couple in 1972 and 1977, respectively.
However, the couple’s love affair was strained because they were unable to see each other on a regular basis. Suu Kyi was placed under house imprisonment while Aris was denied admittance by the Burmese regime.
Suu Kyi feared leaving the country for the time she was free of house arrest because she didn’t trust the military junta’s assurances that she would be able to return. As a result, Aris and Suu Kyi stayed estranged from each other from 1989 until his death in 1999, meeting only five times. Aris was in the final stages of prostate cancer.
Suu Kyi’s children, who live in the United Kingdom, were also separated from her. They have seen their mother in Burma on various occasions since 2011.

Aung San Suu Kyi has a net worth of $50 million dollars,

She travelled to Burma to care for her sick mother, but she became so involved in the country’s political rise that she became the face of a democratic and free Burma.
She was held under house imprisonment in Burma for 15 of the 21 years between July 20, 1989 and November 13, 2010, making her one of the world’s most prominent political prisoners.
Her campaign for a democratic Burma, which she led as a Theravada Buddhist, was based on Mahatma Gandhi’s nonviolence ideology and Buddhist ideals.
She last saw her spouse, Dr. Micheal Aris, in 1995, before his death in 1999. While he was denied a visa because he said he would not be able to receive the therapy he needed, the military pushed her to leave the country to see him. She did not leave the country, however, because she knew she would not be permitted to return to Burma.
Michelle Yeoh, who played the character of Burmese pro-democracy leader, for the film, ‘The Lady’ was deported from Burma on June 22, 2011.