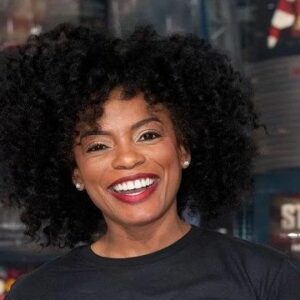 American actor and producer Aunjanue L. Ellis works in theater, movies, and television. She started her career in theater before making appearances in a number of television shows, independent films, and blockbuster movies. She rose to fame as Miranda Shaw on the ABC drama “Quantico,” and she also starred in the epic series “The Book of Negroes” on BET, for which she was nominated for a number of honors and accolades, including the Television Critics’ Choice Award for Best Actress in a Movie. In 1995, she made her professional acting debut in “The Tempest” as Ariel. She has performed on Broadway in the productions of “Come and Gone,” “A Winter’s Tale,” “Drowning Crow,” and “Seeking the Genesis.” She is most known for her work in the movies “Men of Honor,” “The Caveman’s Valentine,” “The Express,” and “The Help.” She has received appreciation for her recurring part in the ABC police drama series “High Incident.”

On February 21, 1969, Aunjanue L. Ellis was born in San Francisco, California. She was raised by her grandmother in McComb, Mississippi, on her farm. She frequently went to a Baptist church where she gave readings and plays.
She started out at Tougaloo College, transferred to Brown University, and eventually earned a bachelor’s degree in African-American studies there. She participated in student plays at Brown University because she loved performing.
She attended the Graduate Acting Program at New York University’s Tisch School of the Arts and studied acting with Jim Barnhill and John Emigh. She belongs to the sorority Delta Sigma Theta.

Aunjanue Ellis made her professional acting debut in 1995 as Ariel opposite Patrick Stewart’s Prospero in a Broadway production of William Shakespeare’s “The Tempest.” Later, she made her acting debut in the Fox police drama series “New York Undercover.”

She made her film debut in “Girls Town,” a smash at the Sundance Film Festival, opposite Lili Taylor. She made minor cameo appearances in the late 1990s in movies like “Ed’s Next Move,” “Desert Blue,” “In Too Deep,” and “A Map of the World.”

She was chosen to play Officer Leslie Joyner in Steven Spielberg’s 1996 ABC police drama series, “High Incident.” She stayed on the show until its cancellation in 1997. She portrayed Sharon Young, a recurrent character, in the ABC legal drama “The Practice” in 1999.

In George Tillman, Jr.’s drama film “Men of Honor,” released in 2000, she featured opposite Cuba Gooding Jr. She appeared in Kasi Lemmons’ mystery-drama movie “The Caveman’s Valentine” in 2001. It was based on the same-titled book by George Dawes Green. She also had a supporting role in the comedy-drama movie “Lovely & Amazing” that year.

In 2002, she was given a second regular part on the ABC medical drama “MDs.” She was cast in the lead role of the action comedy movie “Undercover Brother” the same year, opposite Eddie Griffin.

In the 2004 biographical movie “Ray,” which was about the musician Ray Charles, she played Mary Ann Fisher. The movie received multiple Academy Award nominations. She made an appearance on the NBC drama “E-Ring” from 2005 to 2006. She played Miranda Lee in nine episodes of “Justice” in 2006, when she appeared in a recurring role.
She starred in the suspenseful drama movie “Cover” in 2007. She has also appeared in the movies “The Express” from 2008, “Notorious” from 2009, and “Romeo and Juliet in Harlem” in 2014. In 2009’s Tony Scott film “The Taking of Pelham 123,” she also portrayed Denzel Washington’s wife.

She played Madeleine Hightower, a recurring character, in the television series “The Mentalist” from 2010 to 2013. She made an appearance as one of the servants, Eula Mae Davis, in the historical drama “The Help” in 2011. In the independent films “The Volunteer” (2013) and “Money Matters” (2011), she portrayed the protagonist’s character.
She appeared in seven episodes of the television show “NCIS: Los Angeles” in 2012 as Michelle Hanna. She also starred in the 2012 ABC miniseries “Missing,” and she portrayed the lead in the 2012 television movie “Abducted: The Carlina White Story.”

In the 2013 AMC pilot “The Divide,” which became a WE TV series, Ellis played one of the main characters. She portrayed Vicki Anderson in the biographical drama movie “Get on Up” about musician James Brown’s life in 2014. She portrayed the title role in “Romeo and Juliet” and “Una Vida: A Fable of Music and the Mind” in the same year.
She was chosen to play Aminata Diallo, the main heroine in the epic miniseries “The Book of Negroes,” which was adapted from the best-selling book by Lawrence Hill, in 2014. When “The Book of Negroes” debuted in 2015, Ellis’ performance drew praise from critics and several accolades. In the same year, she played Miranda Shaw, the show’s lead character, in a recurring role on ABC’s suspense drama “Quantico.”

She appeared in the 2016 historical drama movie “The Birth of a Nation,” which is based on the tale of Nat Turner’s 1831 slave uprising. Ellis portrayed Nat Turner’s mother Nancy in the movie. She was paired with Keke Palmer in the drama movie “Pimp” that same year, which focused on the lives of women living on New York’s streets.
Ellis joined the cast of Barry Jenkins’ upcoming movie “If Beale Street Could Talk” in November 2017. The movie is inspired by James Baldwin’s novel about a recently engaged Harlem lady who battles to establish the innocence of her wrongfully incarcerated lover. The movie is currently being made.

Aunjanue Ellis gave one of her best performances in “The Book of Negroes.” Whitney Matheson, a journalist for The Hollywood Reporter, commended Ellis’ performance and said “The six-part miniseries remains cohesive due to Ellis’ riveting portrayal. She showed an incredible range of emotions.” She received numerous accolades for the part.

The Screen Actors Guild Award for Outstanding Performance by a Cast in a Motion Picture went to Aunjanue Ellis and her coworkers for “Ray” in 2004.

Some stories claim that Aunjanue L. Ellis married the man she had been secretly dating for many years. Other reports, however, assert that she is not married.

As of 2022, Aunjanue Ellis has a $6 million net worth. Her acting in several films, dramas, shows, and other projects is the main source of her wealth. Her net worth appears to increase even further in the upcoming years with her increasing success in the film business.