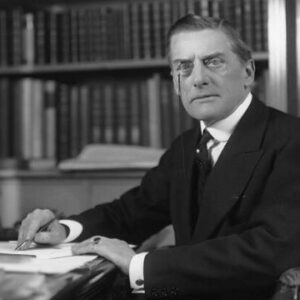 Austen Chamberlain was a British statesman who lived in the late 1800s and early 1900s. For his involvement in negotiating the Locarno Pact, which tried to prevent war between France and Germany, he was given the Nobel Peace Prize. Austen Chamberlain, the son of a well-known statesman, was raised from an early age to follow in his father’s footsteps. He was sent to Paris and Berlin after graduating from Trinity College to gain a firsthand understanding of the political cultures of those two European nations. When he returned, he collaborated closely with his father and gained enough expertise to be elected to the House of Commons at the age of twenty-nine. He was a gifted orator, and Prime Minister W. E. Gladstone was blown away by his first address. Despite the fact that it was an attack on his policy, he praised the young Chamberlain. He consistently played a good role in the House of Commons and made personal sacrifices to keep the party united. Later, as Chancellor of the Exchequer and Secretary of State for Foreign Affairs, he made a name for himself. Many academics have praised his involvement in signing the ‘Treaty of Locarno.’ He was the first to see how dangerous Hitler may be later on.

Austen Chamberlain was born in Birmingham on October 16, 1863. Joseph Chamberlain, his father, was a rising industrialist who subsequently became a well-known statesman. Harriet Chamberlain, Austen’s mother, was

Florence gave birth to a second son, but both the baby and the mother died soon after. Despite the fact that Joseph remarried, he did not have any children.

Austen Chamberlain attended Rugby School, one of England’s oldest and most expensive public schools. He went on to Trinity College, Cambridge, afterwards. He became a member of the Political Society and gave his first political speech there. He was also a member of the Cambridge Union Society, where he eventually served as Vice President.
Joseph had always wanted his eldest son to enter politics. As a result, after graduating from Cambridge, Austen was sent to France and subsequently Germany to gain firsthand experience with their political cultures.

Austen enrolled at the École des Sciences Politiques in Paris and studied for nine months there. He then went to the University of Berlin for a year before returning to Birmingham in 1887.

When Austen Chamberlain returned to England, he began to work closely with his father, who had by this time become a national leader. He quickly gained enough experience to run in the general election in 1892. Austen was elected to the House of Commons for the first time from East Worcestershire, representing his father’s Liberal Union Party.

Austen Chamberlain was appointed a Junior Whip upon entering the House of Commons. It was his responsibility to ensure that his father’s viewpoints were reflected in all policy decisions. However, due to parliamentary insecurity, he was unable to deliver his first address until 1893.

Austen Chamberlain criticised W. E. Gladstone, the then-Prime Minister of Great Britain, over his Government of Ireland Bill of 1893 in his inaugural speech. Despite the attacks, Gladstone applauded the speech and publicly thanked both the father and son on their outstanding performance.

When a Conservative-Unionist alliance achieved a landslide victory in the general election of 1895, Austen Chamberlain was elevated to the position of Civil Lord of the Admiralty. He was thirty-two years old at the time. He spent five years in that job.

To be able to push for tariff reform, Joseph Chamberlain chose to resign from his government role. Austen Chamberlain’s position was severely weakened as a result of this. He remained Chancellor of the Exchequer, however, until the administration collapsed in 1906.

Under Arthur Balfour’s leadership, the Conservative-Liberal Union Party coalition lost more than half of the seats in the 1906 general election. Austen Chamberlain was one of the few members of Parliament who managed to save their seats.

Due to ill health, the senior Chamberlain had to retire some time ago. Austen Chamberlain assumed his post and began leading the party’s fight for tariff reform.

Arthur Balfour’s Conservative and Liberal Union alliance ran again in the 2010 election, but lost. Until 1915, Chamberlain was forced to sit in the opposition. He became Secretary of State for India when the wartime coalition government was created.

Chamberlain resigned from his post in 1917, accepting responsibility for the Indian Army’s failure in the British battle in Mesopotamia. In April 1918, he returned to the government and was appointed as a Minister without Portfolio to the War Cabinet.

Chamberlain was re-appointed as Chancellor of the Exchequer in January 1918. He immediately rose to prominence as a result of his ability to repay the country’s massive debts accrued during the war, as well as maintain a stable currency and strengthen the country’s credit.

Chamberlain became the Leader of the Conservative Party, which was formed by the merger of the previous coalition partners, by the beginning of 1921. He was also elected Leader of the House of Commons at the same time. He was also assigned to the position of Lord Privy Seal.

However, when he went against public pressure to break away from the wartime coalition government, he was demoted. Chamberlain resigned as Leader of the Party after a resolution was approved stating that the party will fight the upcoming election on its own.

In 1924, he returned to the administration as Secretary of State for Foreign Affairs, a position he held until 1929. In this role, he was responsible for resolving numerous international problems.

He criticized the Geneva Protocol in a speech to the League of Nations Council in 1925 because it granted the Council unfettered power. Instead, he proposed that the covenant be augmented by making special arrangements for those who require special assistance.

He was a key figure in the negotiations that resulted in the ‘Locarno Pact,’ which was formally signed in London on December 1, 1925, by the United Kingdom, France, Germany, Italy, and Belgium. Chamberlain was praised for his involvement in the treaty, which brought peace to postwar Europe.

Chamberlain’s dealings with China and Egypt were not particularly fruitful. Despite his toughness in defending British interests in China, he was unable to give a long-term solution. He drew out a proposal in 1927 that would have established permanent Anglo-Egyptian relations, but he left before he could translate it into a treaty.

In 1929, the cabinet of Prime Minister Baldwin resigned, and Chamberlain retired. He did, however, continue to attend the House of Commons and speak authoritatively on a variety of matters.
Chamberlain returned to administration in 1931 as First Lord of the Admiralty in the first National Government for a little period. When the Invergordon Mutiny occurred in September 1931, he resigned.
Chamberlain remained involved in politics for the next six years of his life, albeit as a backbencher. However, he was alongside Winston Churchill from 1934 to 1937 when the latter issued a demand for rearmament in the face of imminent Nazi threats.

Austen Chamberlain is best known for his role in the Locarno Treaties, which were signed in 1925. It was made up of seven agreements with Europe’s major countries, including the United Kingdom, France, Germany, and Italy, and it opened the path for stability and enhanced the continent’s diplomatic climate.

Austen Chamberlain received the Noble Prize for Peace in 1926 for his role in the Locarno Treaties. He shared the award with Charles Dawes, a banker turned politician from the United States.

Austen Chamberlain died at the age of 73 on March 17, 1937. His wife and three children survived him.

The Estimated net worth of Austen Chamberlain is unknown.