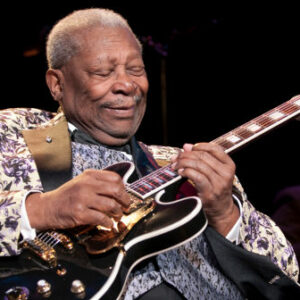 B.B. King was an American singer and guitarist who is regarded as one of the all-time great guitarists. He was dubbed “The King of the Blues” and is credited with popularizing the blues genre over the globe. He was born to sharecroppers on a cotton plantation in Mississippi and came from a poor background. He had a passion for music since he was a child and aspired to be a great musician. He became enamored with the guitar and taught himself how to play it. He relocated to Memphis to pursue his dream of being a musician, and his big break came when he performed on Sonny Boy Williamson’s radio show on KWEM in West Memphis. Because of the show’s success, he was able to maintain a continuous stream of engagements, and he finally began recording. Following the success of his super-hit, ‘3 O’Clock Blues,’ he began touring extensively, establishing himself as a well-known figure with a large fan base. He created his own distinct guitar style over the next few years, integrating elements of classic blues, jazz, swing, and mainstream pop. He was the unquestioned king of blues for decades before his away in 2015 at the age of 89.

Riley B. King was born in Mississippi on September 16, 1925, to Albert and Nora Ella King. His parents worked on a cotton plantation as sharecroppers. Riley was raised by his maternal grandmother when his mother abandoned the family when he was a child.

He was always interested in music and obtained his first guitar when he was 12 years old. Soon after, he trained himself to play the instrument and began performing on street corners to supplement his income.
He earned the nickname “the Beale Street Blues Boy” as a young man, which he later abbreviated to “B.B.”.

He relocated to Memphis to pursue a musical career. He was given the opportunity to perform on Sonny Boy Williamson’s radio show on KWEM, and as a result, he achieved some notoriety.

He began receiving offers to perform at various settings soon after, including a ten-minute slot on Memphis radio station WDIA. The location was an instant hit, and the Sepia Swing Club was afterwards added.

He began recording music in 1949. Despite his early failures, he had a major breakthrough in 1952 with his single “3 O’Clock Blues,” which reached No. 1 on the Billboard Rhythm and Blues charts and effectively established his career.

He began travelling widely after the success of this track. By the mid-1950s, he had established a reputation for playing hundreds of gigs per year; in 1956, he and his band performed 342 one-night stands.

In the 1950s, he became the undisputed king of blues and one of the most influential figures in R&B music. ‘You Know I Love You,’ ‘Woke Up This Morning,’ ‘Please Love Me,’ ‘When My Heart Beats Like a Hammer,’ ‘Whole Lotta Love,’ and ‘You Upset Me Baby’ are just a few of the super-hits he produced over the decade.

Throughout the 1960s, he maintained his winning streak. By this time, he had a new manager, Sid Seidenberg, who made sure that B.B. was well-liked by the white crowd as well. In 1968, he performed at the Newport Folk Festival and Bill Graham’s Fillmore West, helping to promote his image.

King’s most commercially successful album was the blues album ‘Riding with the King,’ which he co-wrote with Eric Clapton. The album was awarded Multi-Platinum in the United States and reached No. 1 on Billboard’s Top Blues Albums.

B.B. King won a Grammy Lifetime Achievement Award in 1987 and was the recipient of multiple Grammy Awards.
He received the Kennedy Center Honors in 1995, which honors “the lifetime accomplishments and remarkable talents of our nation’s most prominent artists.”

In 2004, he was given the Polar Music Prize by the Royal Swedish Academy of Music for his “major contributions to the blues.”
President George W. Bush bestowed the Presidential Medal of Freedom on King in 2006.

He was also said to have been engaged with several more women and fathered 15 children.
Throughout his life, he stayed active. He had diabetes and died of complications from the disease in his sleep on May 14, 2015.

B.B. King’s net worth was estimated to be $10 million.

He was a proud supporter of the charitable group Little Kids Rock, which provides poor children with free musical instruments and education.