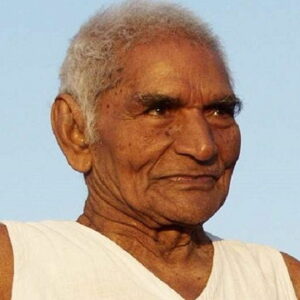 Baba Amte was an Indian social worker who committed his life to the noble cause of social service, specifically to improving the lives of leprosy patients. His conscience was shocked when he first encountered leprosy sufferers’ anguish and ostracization, and he was motivated to do something to help them. For these patients, he established various ashrams and hospitals. He grew up in a privileged family and led an enviable life. He grew up with a gun and enjoyed hunting! He communicated with Norma Shearer and Greta Garbo, among others, as a cinema buff. However, as he grew older, he recognized that there was far too much injustice and misery in the world. This inspired him to give up his opulent lifestyle and devote himself to the benefit of the world. Fortunately, he met and married Sadhana, a kindred spirit who shared his enthusiasm for social service. He was a Gandhian who led a spartan lifestyle. He encouraged the leprosy sufferers to be self-sufficient and worked for their rehabilitation because he believed in the virtue of hard labor. He also raised awareness about ecological balance and the protection of wildlife.

Muralidhar Amte was born in Wardha district to Devidas Amte and his wife Laxmibai. His father worked for the British government, and his family was well-off and rich. His childhood nickname was “Baba.”

He had a wonderful upbringing and, by the time he was a teenager, he had his own pistol! He enjoyed watching movies and hunting. He also published film reviews for a magazine and corresponded with stars such as Greta Garbo and Norma Shearer.
His father got him a Singer sports car when he was old enough to drive. He was living such a lavish lifestyle as a child!

Baba established a flourishing law firm in Wardha after completing his legal school. The Indian Nationalist movement was in full swing at the time, and he joined the fight for independence.
During the 1942 Quit India Movement, he became a defense counsel for freedom fighters who were imprisoned by British authorities.

He met Mahatma Gandhi as a liberation fighter and spent time with him in the seva gram ashram. He became Gandhi’s devotee and began wearing khadi after being inspired by Gandhi’s teachings.
It was during this time that he became aware of the suffering endured by leprosy patients. Because people thought leprosy was contagious, patients were treated as outsiders and shunned.

In 1948, he built the Anandwan Ashram with the goal of not only helping leprosy sufferers but also enabling them to live a life of self-respect and dignity.
Anandwan is a community rehabilitation center for leprosy sufferers where they learn to work hard and become self-sufficient. For recreation, the ashram has schools, hospitals, and community facilities.

“Work Builds; Charity Destroys,” was Baba Amte’s credo, and he urged all of Anandwan’s inmates to live with self-respect and dignity, contributing to the community’s life by doing whatever work they could.
He gave numerous opportunities for children and young people in Anandwan to receive an education, learn new skills, become self-sufficient and stand on their own feet by opening schools, a university, and training facilities.

He was continually emphasizing how humans are interdependent on one another and on the natural environment. That is the ideology that unites Anandwan, in which everyone has a role to perform in the community, whether it is cooking communal meals, mentoring children, caring for infants, or planting trees.

He also founded Gokul and Uttarayan, which are children’s and senior citizens’ homes, respectively. In Gokul, 60 orphans and children of leprosy patients are supplied with food, shelter, clothing, and other basic necessities.

For healed leprosy patients, he established Sukh Sadan, which means “House of Happiness,” where individuals form “social families” in which two couples pledge to care for an older couple. The elderly couple also assists by looking after the younger couple’s children and offering advice.

He was an environmentalist who felt that humans should coexist with nature rather than exploit it. He inspired people to adopt a concept of sustainable development that would benefit both humanity and the environment.

Baba Amte, a strong believer in national unity, coordinated two Bharat Jodo—Knit India Movements in 1985 and 1988, one from Kashmir to Kanyakumari and the other from Assam to Gujarat. He wanted to encourage humans and the environment to live in harmony.

He joined Medha Patkar in the Narmada Bachao Andolan in the 1990s, which was a grassroots movement to resist the construction of the Sardar Sarovar Dam across the Narmada River.

He founded the Anandwan ashram, a communal rehabilitation center for people with leprosy and other disabilities. It is a self-sufficient community based mostly on agriculture, in which everyone learns a skill and makes a living through hard work.

In 1985, he received the Ramon Magsaysay Award for his unselfish commitment to the people.
The Government of India bestowed upon him a variety of honors, the greatest of which was the Padma Vibhushan in 1986. He used to donate all of his prize money to Anandwan.

Baba was at an event in 1946 when he noticed a girl who left the party to assist an elderly maid with her chores. He determined that this was the type of life mate he desired, and he married Sadhana. The couple had two boys and remained happily married until the end of their lives.

His two sons, together with their wives, are all medical doctors who have committed their careers to social service, carrying on Baba Amte’s tradition.
He led a long life dedicated to improving the lives of the sick and impoverished. At the age of 94, he died in 2008.

Baba Amte has an estimated net worth of $ USD 9 million and earns a living as a journalist, social worker, and lawyer. We don’t have adequate proof about Baba Amte’s automobiles or lifestyle.