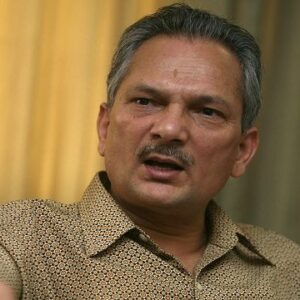 Baburam Bhattarai is a Nepalese politician, guerrilla leader, and scholar who served as the 35th Prime Minister of the country. He excelled in studies and topped the school and college board exams despite being born into a peasant background. He received his bachelor’s, master’s, and PhD degrees from several Indian colleges before returning to his homeland to lead a Maoist insurrection against the king and government. He was the true human face of the struggle, despite being second-in-command to Pushpa Kumar Dahal, better known as Prachanda of the Communist Party of Nepal (Maoist). He was the first to call for the distribution of land to landless farmers, the elimination of unfavorable treaties, and the prohibition of foreign investment in enterprises and other areas. He began an armed battle against the government’s harsh legislation and led the agitation for eleven years. He even resigned the administration to start a political party with former party and government colleagues and others to fight for the oppressed. Bhattarai founded the party as an alternative to the government’s misrule.

Baburam Bhattarai was born on June 18, 1854, into a poor peasant family in Gorkha, Khoplang VDC, central Nepal. He had a younger sister, a younger brother, and an older sister.
He went to ‘Amar Jyoti High School’ in Luintel, Gorkha, for his education. During the 1970 ‘School Leaving Certificate Exam,’ he was placed #1 in Nepal.
He enrolled at ‘Amrit Science College,’ where he once again received the highest scores in the board test.
He was awarded a Colombo Plan scholarship and studied architecture in Chandigarh, India. In 1977, he earned a bachelor’s degree in architecture.
During his time at Chandigarh, he founded and served as President of the ‘All India Nepalese Students’ Association.’
In 1979, he obtained his M.Tech degree from the ‘Delhi School of Planning and Architecture.’
In 1986, he received his PhD from New Delhi’s ‘Jawaharlal Nehru University.’

After returning to Nepal in 1981, he joined the pro-Maoist Communist Party of Nepal (CPN) and rose through the ranks to become its head in 1986.
In 1990, he founded the CPN (Unity Center) and joined the Communist Party of Nepal (Maoist) in 1994, under the leadership of Pushpa Kumar Dahal or Prachanda.
Bhattarai presented Prime Minister Sher Bahadur Deuba with a list of 40 demands on February 4, 1996, and warned armed resistance if the demands were not met by the ruling Nepali Congress.
Soon after the deadline passed, he and the Communist Party of Nepal (Maoist) began agitation, which lasted until April 26, 2006.
During the armed movement, Bhattarai had a disagreement with Prachanda concerning power sharing inside the CPN (M) party and was expelled from the party and placed under house arrest, but was eventually reinstated.
During the latter half of 2004 and 2005, the two leaders were able to reconcile. Bhattarai was a crucial figure in the April 2006 mediation process that brought the armed struggle to a conclusion.
When the election was held following the cease-fire, Bhattarai became the second-in-command of the CPN (M), which was one of the ‘Seven Party Alliance’ constituents and was led by Prachanda.
The alliance re-established the parliament that had been dissolved in May 2002, and the new constituent assembly drafted a new constitution. On May 28, 2008, it stripped the king of all his powers and declared the monarchy a republic.
In 2008, he was elected to the Constituent Assembly from Gorkha and appointed Finance Minister in Prachanda’s new government. After Prachanda resigned in May 2009, Bhattarai became Prime Minister in August 2011, following two failed governments led by opposition CPN (Marxist-Leninist) prime ministers.
He remained Prime Minister until March 2013, when he resigned to end the political impasse that had existed since the Constituent Assembly was dissolved in May 2012. He was succeeded by Chief Justice Khil Raj Regmi, who led the interim administration until the June 2013 elections.
He remained a member of the ‘Unified Communist Party of Nepal (Maoist)”s ‘Senior Standing Committee’ and Vice Chairperson until September 27, 2015, when he resigned.
He resigned from the party and all other positions because he sympathized with the Madhesis, who were denied the right to express their grievances. Some Madhesi factions requested him to leave the party and lead their struggle.
Bhattarai decided to join the movement since he was backed by around 85 Maoist members of parliament.
He founded a new party called ‘New Force Nepal’ on January 24, 2016, with a ‘Interim Central Council’ of Maoists, former government officials, technocrats, artistes, political analysts, and former bureaucrats as an alternative to Prachanda’s UCPN (M) government.

In 2003, Baburam Bhattarai’s PhD thesis, titled “The Nature of Underdevelopment and Regional Structure of Nepal – A Marxist Analysis,” was released as a book.
In 1998, he authored ‘Politico-Economic Rationale of People’s War in Nepal.’
‘Nepal! Krantika Adharharu,’ a novel written in Nepali, was published in 2004. He has written a number of other articles.

Baburam Bhattarai married Hisila Yami, another Communist Party of Nepal leader (Maoist).
Manushi is his daughter’s name.
He has advocated for the gentry’s land to be distributed to the country’s landless farmers.