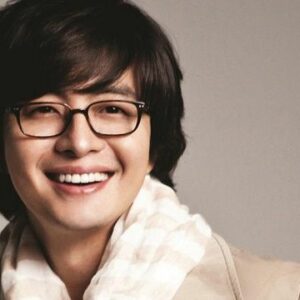 Bae Yong-joon is a South Korean actor, businessman, and novelist who has won numerous awards. Born and raised in Seoul, he debuted in the acting industry with the drama ‘Salut D’Amour,’ which became a smash and cemented Bae’s reputation as an actor. The following year, he got his first award for ‘Our Sunny Days of Youth.’ Gaining recognition so early in his career wasn’t easy, but it did bring Bae to the attention of TV producers, and he went on to star in successful dramas like ‘Winter Sonata,’ ‘First Love,’ and the film ‘Untold Scandal,’ eventually establishing himself as one of his generation’s most capable performers. He has won numerous KBS Drama awards and MBC Drama awards during his career, as well as a Grand Bell Award and a Blue Dragon Film Award for his work in the film ‘Untold Scandal,’ the country’s highest honors for performers. Aside from his acting roles, he is also a best-selling author, having written novels like as ‘Journey in Search of Korea’s Beauty’ and ‘Visit to Kyoto.’

On August 29, 1972, Bae Yong-joon was born into a very impoverished family in Seoul’s Mapo District. Since his childhood, he has had an artistic side. His parents were never concerned about their son’s future because he excelled academically. He excelled in sports and academics in addition to literature and the performing arts.

His enthusiasm in acting peaked during his senior year of high school, and once he graduated, he began applying for roles.

His self-assurance in his acting abilities landed him his first acting job in ‘Salut D’Amour,’ a South Korean romance drama in which Bae played a college student. That was in 1994, and shining in one’s debut acting project was no small feat.

More offers followed, and he landed a main role in the wildly popular but short-lived drama series ‘Sunny Days of Youth’ the following year. It was only his second acting role, and he received multiple award nominations including the Best New Actor prize at the KBS Drama Awards that year.

Several lead parts in television followed over the next few years. He had mixed results, as some of his concerts were successful while others were not. Some of them, such as ‘Papa’ and ‘First Love,’ attracted record audiences. ‘Did We Really Love?’ in 1999 solidified his reputation as a great young actor, and the series was hailed by reviewers as the best drama of the year.

The drama series ‘Winter Sonata,’ which premiered in 2002, did not only well in South Korea, but also helped to popularize Korean shows in other countries. It was about love, heartbreak, and compassion, and it became a pan-Asian success in more than 20 countries, particularly in Japan, where Bae’s popularity grew to the point where he was dubbed Emperor Yon, a Japanese phrase signifying extreme respect.

Bae had a modest film career up to that point, having previously participated in two small feature films in the 1990s, but in 2003 he starred in the film ‘Untold Scandal,’ in which he played a sexually depraved anti-hero. The film went on to be a huge hit, and Bae’s performance was recognized at the Baeksang Arts Awards and the Korea Film Awards that year.

Bae had lost interest in acting by this point and was seeking for new artistic outlets. He had a to-do list that included writing a book, and in 2004, he published his first book, ‘The Image: Volume 1’, which looked back on Bae’s acting career. Bae’s body was also covered in the book, as he worked hard and followed a rigorous diet to prepare for his roles. The book went on to become a bestseller, and critics praised his writing style. More than a million copies of the book were sold.

His second big screen appearance was in the 2005 film ‘April Snow,’ in which he played a light director who discovers that his wife was cheating on him after she is involved in a car accident. The picture got off to a slow start, and negative word of mouth contributed to its eventual failure at the domestic box office. However, the Japanese box office was a different story, and because Bae had such a large fan base in Japan, the film became a profitable endeavor.

He then went on to start his own restaurant business before making his much-anticipated return to television in 2007 with the series ‘The Legend,’ in which he portrayed the dual role of a god’s son and a monarch. Bae was paid 250 million won for each episode of the series, making him the highest-paid South Korean actor of all time. That year, Bae received the Grand Prize at the MBC Drama Awards, as well as numerous other honors.

In 2009, the much-anticipated Japanese anime adaptation of his successful series ‘Winter Sonata’ was released to rave reviews in Japan. Bae dubbed his own character in the anime, and as a result, his fan base in the neighboring country grew even more.

In the same year, he began work on his second book, ‘A Journey in Search of Korea’s Beauty,’ which was published in 2009 and was primarily a compilation of photo essays about Korean culture. The book went on to become a best-seller and was converted into a documentary film by MBC Life, as well as being translated into English, Japanese, Chinese, and Taiwanese.

He also served as a producer for the 2011 teen drama series ‘Dream high,’ which followed the lives of a group of South Korean high school students learning the performing arts. Bae also worked on the series as a creative producer and an additional writer.

In the year 2012, he published another book, titled “Visit to Kyoto,” which was also a success.
Because he has slowed down his acting appearances in recent years, he has devoted his full attention to his burgeoning restaurant business, which appears to be quite successful in Japan, where Bae is the most well-known South Korean celebrity.

Bae Yong-joon has dated Lee Sa-kang, the director of music videos, and has also been linked to Koo So-hee.
Park Soo-jin, an actress, was eventually the woman he accepted as his life partner, and the couple got engaged in May 2015 and married two months later. The gathering was a private affair attended by only a few close friends and family members. In October 2016, the couple welcomed their first child, a son.

Bae Yong-joon is one of the wealthiest TV actors and one of the most popular. Bae Yong-net joon’s worth is estimated to be $1.5 million, according to Wikipedia, Forbes, and Business Insider.