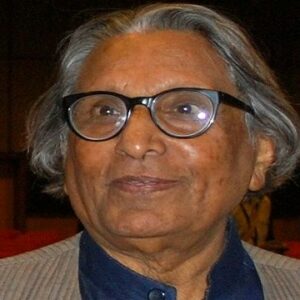 Vithaldas Balkrishna Doshi is a well-known Indian architect who has contributed significantly to the development of the country’s architectural discourse. The innovativeness Dr. Doshi infuses into his sustainability principles is what distinguishes him as a very exceptional architect. His groundbreaking work on affordable housing is the epitome of genius wherein inventiveness and suitability come together. He has played a significant role in the advancement of contemporary city planning in India and in promoting architecture that has a modern perspective yet is constructed using traditional methods. Doshi, who is regarded as one of India’s most important 20th-century architects, was greatly influenced by the works of Le Corbusier and Louis Kahn in his early years. Doshi has worked as an academic and an educator in addition to being an architect. A number of prominent Indian institutes were founded by him. In addition, he has held the position of Fellow of the Royal Institute of British Architects and traveled as a visiting academician to the United States and Europe.

Balkrishna V. Doshi worked in Paris from 1951 to 1954 for the renowned French architect Le Corbusier after receiving his degree from the J.J. School of Architecture. After that, he went back to India to oversee Le Corbusier’s construction projects there.

Doshi founded Vastu Shilpa in 1955. (environmental design). He advanced his academic career while producing architectural works. He joined the Graham Foundation for Advanced Studies in Fine Arts as a fellow in 1958.

One of Doshi’s most notable accomplishments is the 1962-founded and planned Ahmedabad School of Architecture. The structure incorporated Doshi’s concept of designing straightforward yet useful rooms. The School of Architecture’s site included straightforward brick and concrete buildings that were encircled by shaded courtyards, staircases, and an open floor plan. The building demonstrated the influence of Le Corbusier and Louis Kahn on Doshi’s architectural design and provided a view of a typical Indian townscape. The institution was finished in 1966.

Doshi began working at the Indian Institute of Management, Bangalore, one of the most prestigious undertakings of his career, in 1962. The site and building were constructed using natural stones to reflect Doshi’s idealistic outlook on sustainability. His design style is based on the idea that places should require little upkeep and instead exude self-sustaining energy.

Doshi created the Tagore Memorial Hall in 1966. The 700-seat theatre, which was constructed in Ahmedabad as a monument to the great author and poet Rabindranath Tagore, has reinforced concrete walls that are divided into wings that produce opposing planes of light and shadow. One of Doshi’s most renowned creations, it features ornate artwork and sculptural columns that frame the tier-style sitting arrangement.
Doshi’s School of Architecture was remodeled and renamed the Center for Environment and Planning Technology in 1972. (CEPT).

Doshi’s Vastu-Shilpa constructed its own studio, known as “Sangath,” in 1980. The building, one of the famous ones, displayed his experimental side. It has a number of barrel-vaulted roofs with porcelain mosaic tiles all over them. The structure, which his crew refers to as “sunken vaults,” is encircled by a garden and has an outdoor amphitheater that he frequently utilizes for lectures and other events.

He received a commission to design Vidyadhar Nagar in Jaipur in 1980. Over 100,000 people were expected to reside in the enormous new metropolis, which is located northwest of Jaipur on a 400-hectare land. The architectural plans showed how Doshi intended the new housing township to have wide central avenues, narrow minor streets, and protective approach roads.

Doshi began working on the campus design for the National Institute of Fashion Technology, New Delhi, in the middle of the 1980s. He kept the vision straightforward and doable. To give students a uniform and collaborative learning environment, the institute has deliberately clustered components that include classrooms, laboratories, a common lobby, and service areas.

Amnavad Ni Gufa, formerly known as Husain-Doshi ni Gufa, is the most well-known of his eminent creations. The cave-like building is actually an underground art gallery that was primarily constructed to display the works of MF Hussain, and it accurately reflects Doshi’s experimental aesthetic. The gallery juxtaposes architecture and art with its tree-like columns supporting the several interconnecting domes that are covered in a tile mosaic.

Doshi also created the Premabhai Hall in Ahmedabad, another famous structure. The hall had stopped operating because of fire safety issues, but in 2009 it was given new life as a City Center. As part of the construction of the pedestrian plaza and pathway between Bhadra Fort and Teen Darwaza, a rejuvenation project was initiated.

Throughout his later years, Doshi continued to make a significant contribution as one of India’s most important architects. Aranya Low-Cost Housing in Indore, IFFCO township in Kalol, Sawai Gandharva in Pune, ECIL Hyderabad, Jnanah-Pravah Centre for Cultural Studies in Varanasi, LIC Housing in Ahemdabad, and Aitra Housing in Ahemdabad are just a few of his most well-known creations.

The research center Vastu-Shilpa Foundation for Studies and Research in Environmental Design has been founded in part thanks to Doshi. The nationally and globally renowned institute has contributed significantly to the development of affordable housing and urban planning projects.

While Dr. Doshi is credited with designing some of the most recognizable structures in the nation, the Amnavad Ni Gufa on the IIM A campus is unquestionably his finest achievement. One of Doshi’s more adventurous ventures is this one. His background in creative design enabled him to combine architecture and art in this cavernous edifice, which is surrounded by interconnecting domes and columns that resemble trees. The underground gallery of art was primarily constructed to function as a museum showing the creations of renowned artist M. F. Hussain.

He received the Padma Shri award in 1976 in recognition of his groundbreaking contributions as an architect and educator.

The sixth Aga Khan Award for Architecture was to Doshi for his work on the Aranya Community Housing in Indore.
From the University of Pennsylvania and McGill University in Canada, he received an Honorary doctorate.

In 2011, he was awarded Officer of the Order of Arts and Letters, France’s highest artistic honor.
For his enormous contribution, Dr. Doshi was given the coveted Pritzker Architecture Prize in 2018, which is regarded as the architectural world’s Nobel Prize.

125 of the most significant architectural achievements since 1891 were included in the New York-based Architectural Record magazine, including Dr. Doshi’s studio Sangath.

Net Worth of Balkrishna Doshi