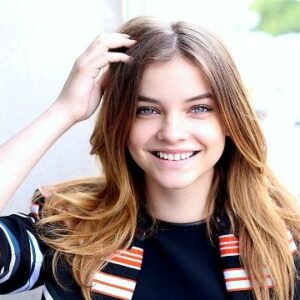 As a young adolescent, this doe-eyed brunette rose to stardom and grabbed the attention of the fashion industry’s who’s who. Barbara Palvin drew the attention of major fashion brands with her flair and photogenic-killer looks. This Budapest-born beauty is one of the world’s hottest models, having walked the runway for a slew of fashion houses and graced the pages of countless international publications. At the age of 19, she was named the youngest and newest muse of L’Oreal Paris, joining celebrities Gwen Stefani and Claudia Schiffer in the L’Oreal Paris family. She imparted freshness and elegance with her fascinating personality and wonderful sense of humor, resulting in her being regarded as a promising supermodel with incredible potential to reach the sky. Her breathtaking beauty and flawless form earned her the title of Victoria’s Secret Angel in 2012. She created a reputation for herself in the fashion business in a short amount of time and is considered one of the most recent supermodels. Apart from her profession as a fashion and lingerie model, this Hungarian beauty was also in the news for a claimed brief relationship with renowned pop sensation Justin Bieber, which was supposed to be the reason for the latter’s breakup from Selena Gomez.

Barbara Palvin was born in Budapest, Hungary, on October 8, 1993. As a kid, she liked to sing and play soccer. In 2006, she was seen going down a street with her mother in Budapest. She was only 13 years old at the time. She agreed to model after being heavily impressed by Kate Moss’s elegant heroine image in the 1990s.

She did her first photo session for Spur magazine in 2006 for her first editorial. She relocated to Asia, specifically Japan, where she quickly found modeling success. She did, however, return to Europe to establish herself. She had her first appearance on the cover of a popular fashion magazine, French L’Officiel, in February 2010, followed by Russian L’Officiel and Jalouse in March and April, respectively. She made her runway debut in February 2010 during the Autumn/Winter Milan Fashion Week, walking for the prestigious brand Prada.

At the age of 19, she was chosen as a Victoria’s Secret Angel and modeled at the lingerie brand’s fashion show in 2012. At the 2013 Golden Globes Awards, she made a spectacular appearance as one of L’Oreal Paris’ spokesmodels. For the Fall 2013 campaign, she was named the new face of Gas jeans. She was featured in the Victoria’s Secret Swim 2013 Catalogue, which debuted the brand’s latest lingerie and swimwear range. She was featured on the cover of Malibu Magazine’s November 2014 issue in a vintage glam appearance that harkens back to the 1970s.

In 2014, she made her acting debut in the film ‘Hercules,’ which was released. In the January 2015 editions of Elle Brazil and Vogue Portugal, she was featured on the covers. Jeremy Scott, Armani Exchange, H&M, Louis Vuitton, Chanel, Emanuel Ungaro, Julien MacDonald, Miu Miu, Vivienne Westwood, Pull and Bear, and Christopher Kane are among the many fashion labels for whom she has modeled. Elle France, Jalouse Magazine, Glamour Hungary, Harper’s Bazaar Korea, Harper’s Bazaar Spain, French Revue de Modes, and Vogue Russia have all featured her on their cover pages.

She rose to international prominence after walking the runway at the 2012 Victoria’s Secret Fashion Show as a calendar girl wearing the renowned Angels’ wings. She is the newest face of the L’Oreal Paris cosmetics line. She is the face of the Rouge Caresse lipstick collection as well as the Miss Candy cosmetics line.

She is in a relationship with Kristof Somfai, a Hungarian. After Justin Beiber’s breakup with Selena Gomez, she was said to be dating Canadian music star Justin Beiber for a short time. After a few weeks, though, Beiber was sighted with Gomez again, putting the rumors to rest.

Barbara Palvin is a Hungarian fashion model with a $6 million net worth. Barbara Palvin was born in Budapest, Hungary, and began modeling when she was 13 years old, when she was approached on the street by a talent scout. She landed her first large work that year, a spread in Spur Magazine, and has since appeared in a number of high-profile publications.

Her first language is Hungarian, although she is also fluent in English and French.
She is frequently likened to Natalia Vodianova, a Russian model, and Brooke Shields, an American actress.
Fashion photographers dubbed her ‘Barbie’ because of her youthful age and small stature.