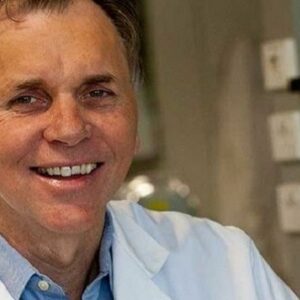 Barry James Marshall, a Nobel Laureate, is an Australian physician who, with Dr. Robin Warren, made the groundbreaking scientific discovery that the bacteria Helicobacter pylori is the root cause of most peptic ulcers. The finding was made at a period when the world believed that peptic ulcers were caused by stress, spicy foods, and too much acid. It was a game-changing discovery since it contributed to the identification of the relationship between Helicobacter pylori infection and stomach cancer. Marshall grew up in a typical middle-class family. He had a natural aptitude for science since he was a child, and he earned a Bachelor of Medicine and Surgery from the University of Western Australia. He began his profession as a physician, but was soon inspired by Dr. Robin Warren’s work as a pathologist who specialized in gastritis. Their research led to the ground-breaking discovery that the bacteria Helicobacter pylori (H. pylori) are the most common cause of peptic ulcers. He received various accolades and honors for his remarkable contributions to the field of research.

Barry Marshall was born in Kalgoorlie, Western Australia, on September 30, 1951. His father was in his final year of apprenticeship as a fitter and turner when he was born, and his mother had left her nursing job. He was the oldest of four brothers and sisters.

Marshall was continually on the road in his early years, first to Carnarvon, where his father worked as a tradesman. The family relocated to Perth after roughly five to six years.
He was a student at a prestigious school in Perth. He was an excellent student, and both of his parents encouraged his inquisitiveness and eagerness to learn.

After completing his secondary education, he was accepted into Newman College and then the University of Western Australia, where he received his M.B.B.S. degree in 1974.

He completed his internship at the Queen Elizabeth II Medical Centre in 1975. In contrast to other students who expressed an interest in pursuing a medical career, he was more interested in pursuing a research career in academia.

He began his specialist physician studies in 1978. He relocated to Royal Perth Hospital the next year, hoping to obtain more expertise in cardiology and open-heart surgery. He worked as a physician-in-training there.
He transferred to the GI department in 1981 due to the usual practice of rotation, where he had a chance to meet with Dr. Robin Warren, a pathologist interested in gastritis.

Dr. Tom Waters, who was interested in working on a gastroenterology project, requested him to help Robin Warren, who had done research on stomach biopsies on a list of patients who had the presence of curved bacteria and needed someone to follow up on it for him.

He joined Warren in the research, and the two of them focused their attention on the prevalence of spiral bacteria in gastritis. He became increasingly committed and interested in the subject.
With his stint at the gastroenterology department coming to an end at the end of 1981, the habit of shifting resumed.

He was to work as a hematology registrar caring about bone marrow transplant patients for the first six months of 1982 and then as a physician at Port Hedland Hospital. He did, however, forego this in order to pursue his passion for spiral bacteria research.
The family relocated to Port Hedland in 1982, where he conducted much of his considerable studies and writings.

Following the conclusion of his contract with Royal Perth, he obtained work as a senior registrar at Fremantle Hospital in Perth, which not only provided him with a job but also paid him for his work.

In the same year, he and Warren performed the first H. pylori culture and formulated their theory about the bacterial causation of peptic ulcers and stomach cancer. Other scientists and doctors, on the other hand, disagreed with this notion, believing that germs could not thrive in the stomach’s acidic environment.

He eventually succeeded in establishing helicobacter in the laboratory, despite significant setbacks. His findings were published in the British medical magazine ‘The Lancet,’ but they received little attention.

The following year, he presented his results on H Pylori bacteria at an international conference in Brussels, Belgium, but the audience was uninterested. Instead, they typically concluded that the bacteria’s appearance was just coincidental.

His notion of the existence of bacteria was ruled out because the world believed that peptic ulcers were caused by mental stress and stomach acids and that the only therapy was a course of antacid medication.
Though he had had some success treating human ulcer patients with a mix of bismuth and antibiotics by 1984, he had yet to demonstrate that introducing the helicobacter into a human subject would produce gastrointestinal sickness.

Due to a paucity of volunteers, he conducted the experiment on himself, ingesting a turbid, foul-tasting Helicobacter pylori solution. After a week, symptoms began to appear, and an autopsy revealed irritation in his stomach lining.
He was ultimately able to prove that peptic ulcers are caused by the bacteria Helicobacter pylori, albeit using unconventional methods. His work began to gain traction at this point. Experiments were started all across the world to refute his findings, but they only served to strengthen his conviction.

He was finally called to the United States in 1986 to serve at the University of Virginia as a Research Fellow and Professor of Medicine. He not only taught but also founded the International Research Foundation for Helicobacter and Intestinal Immunology in Charlottesville, Virginia, according to his academic profile.

He was awarded Professor of Research in Internal Medicine at the University of Virginia in 1996. Furthermore, the United States Food and Drug Administration approved a peptic ulcer disease treatment plan based on his research and conclusions.

He is currently a Senior Principal Research Fellow at the University of Western Australia for the National Health Medical Research Council (NHMRC). He obtained a part-time position at Pennsylvania State University in 2007.

He has received multiple accolades from the international scientific community for his work on the bacterial origin of peptic ulcers. In 1994, he was awarded the prestigious Warren Alpert Prize.
The following year, he received the prestigious Australian Medical Association Award, as well as the Albert Lasker Clinical Medical Research Award, which is the most coveted distinction in American medicine, with his colleague Dr. Warren.

He has also received the Gairdner International Award in Canada, the Paul Ehrlich Prize in Germany, the Heineken Prize in the Netherlands, the Florey Medal and Centenary Medal in Australia, the Buchanan Medal of the Royal Society in the United Kingdom, the Benjamin Franklin Medal for Life Sciences, and the Keio Medical Science Prize in Japan.

After a decade of controversy about being the top contender, he ultimately got the coveted and highly awaited Nobel Prize in Physiology or Medicine in 2005. Dr. Warren split the reward.
In 2007, he received the title of Companion of the Order of Australia. He received an honorary Doctor of Science degree from the University of Oxford two years later.

In 1972, he married Adrienne and they had a child. Luke, Bronwyn, Caroline, and Jessica, the couple’s four children, were born to them.

Barry Marshall has a net worth of $16 million dollars.

This well-known scientist is featured in the 2011 film ‘Contagion,’ in which scientific researcher Ally Hextall acknowledges him as a source of inspiration. In the film, she, like him, injects herself with a test serum in an attempt to speed up the vaccine development process.