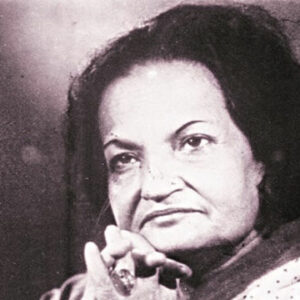 Begum Akhtar, who was also known as Akhtari Bai Faizabadi, was a well-known Hindustani classical music singer from India. She was best known for singing in the Ghazal, Dadra, and Thumri styles. She was one of the most famous Indian singers of her time. She was called Mallika-e-Ghazal, which means “Queen of Ghazals.” She was known for her soulful, sad, and melancholy melodies. Her career as an artist was very successful, but her personal life was very sad. Her father left the family when she was young, leaving her mother to take care of her and her siblings on her own. Soon after that, she lost her sister, who she loved very much, to poison. In her early years, misfortunes and tragedies kept happening to her, but singing helped her cope with them. She liked music and started taking singing lessons when she was a little girl. At 15, she gave her first public performance. She was inspired to become a musician by the famous poet Sarojini Naidu, who told her she was doing a good job. She went into movies as an actress because she was pretty and good at what she did. She also sang the songs in all of her movies. She made a name for herself with her rich, soulful voice and won several honors and awards for her work in classical music.

Akhtaribai Faizabadi was born on October 7, 1914, in Faizabad, Uttar Pradesh, India, to Asghar Hussain and his second wife, Mushtari. Her name at birth was Akhtaribai Faizabad. She was an identical twin. Her lawyer father turned his back on the family when the girls were very young and never talked to them again.

It was hard for her to grow up. When her sister died at age four from poisoning, things got even worse.
Akhtari heard music when she was young and was completely taken with it.

Her mother and other family members saw how talented she was and got her lessons from the great sarangi player Ustad Imdad Khan from Patna and then from Ata Mohammed Khan from Patiala. Then she studied with Mohammad Khan and Abdul Waheed Khan of Lahore before becoming Ustad Jhande Khan’s student.

Begum Akhtar sang in public for the first time when she was 15 years old. The famous poet Sarojini Naidu heard the teenager sing at a concert to help the people who had been hurt by the 1934 Nepal-Bihar earthquake. She was very impressed by her and gave her a lot of praise. This made the girl want to try to make a living as a singer.

She was a pretty young girl with a nice voice, so it was only natural that she was interested in movies. In 1933, she was in movies like “Ek Din Ka Badshah” and “Nal Damayanti,” which were early talkies. In all of her movies, she sang the songs herself, just like other actresses of that time.

Mehboob Khan, a well-known producer, and director heard about her success as an actress and singer and asked her to be in his next movie. In 1942, the movie “Roti” came out. It was supposed to have six of her ghazals in it, but after a fight between the producer and the director, three or four of the ghazals were taken out.

She got married in the middle of the 1940s and took a few years off from work. But being away from her job and passion, which she loved, hurt her health, and she was told to start singing again. She went back to the recording studios and sang three ghazals and a Dadra at Lucknow All India Radio station. Then she went back to singing in concerts, which she did until she died.

Begum Akhtar was one of the best singers of Ghazal, Dadra, and Thumri in Hindustani classical music. She was called Mallika-e-Ghazal, which means “Queen of Ghazals.” She was known for her deep, soulful voice and almost 400 songs. She was also known for her skill as a composer of ghazals based on raags.

In 1968, the Indian government gave her the Padma Shri award for being one of the best singers of Hindustani classical music. She also got the Padma Bhushan after she died, in 1975.
In 1972, she was given the Sangeet Natak Akademi Award.

Begum Akhtar’s early life was very hard and sad. As a child, her music teacher abused her, and as a teen, she was raped. After being raped, she got pregnant and had a daughter, who she told everyone was her sister to avoid the shame that comes with being an unwed mother.

In 1945, she married a lawyer from Lucknow named Ishtiaq Ahmed Abbasi. After she got married, her husband told her she couldn’t sing for a few years.

She did things right up until the end of her life. She died on October 30, 1974, not long after giving what would be her last show.

Begum Akhtar is one of the most popular and richest actors. Based on what we know and what Wikipedia, Forbes, and Business Insider say, Begum Akhtar is worth about $1.5 million.