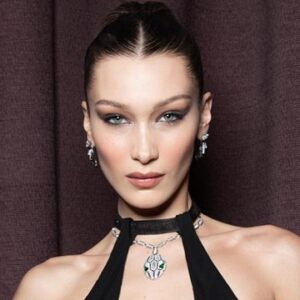 Bella Hadid is an American model whose real name is Isabella Khair Hadid. She was named ‘Model of the Year’ at Model.com’s Model of the Year Awards in 2016, and is regarded as one of the most stylish and accomplished young models in the contemporary fashion world. Hadid began her modeling career at a young age with a commercial for Flynn Skye. She went on to work as a model for a number of well-known fashion houses, including Diane von Furstenberg, Marc Jacobs, Chanel, Balmain, and Tommy Hilfiger. She has also graced the covers of publications such as ‘Seventeen,’ ‘Elle,’ ‘Teen Vogue,’ and ‘Vogue Australia.’ She has also created her own fashion clothing line, Robert Riley’s, in addition to modeling. She is also very active on social media, with 17 million Instagram followers and roughly 992 thousand Twitter followers.

At the age of 16, Bella Hadid began her modeling career with a Flynn Skye commercial job. She was soon featured in several productions, including Lesa Amoore’s ‘Swan Sittings’ and Holly Copeland’s ‘Smoking Hot.’ In 2013 and 2014, she also worked on campaigns for Chrome Hearts.

She signed with IMG Models in August 2014 and walked for Desigual at New York Fashion Week the following year. She walked for Tom Ford in the spring 2015 fashion weeks in Los Angeles. Later, she walked for Diane von Furstenberg, Tommy Hilfiger, Jeremy Scott, and Marc Jacobs, among others. She also walked the runway for Balmain during Paris Fashion Week. In December 2015, she made her Chanel debut, walking in the premium brand’s Métiers d’Art show in Rome for the first time.

Isabella Khair Hadid was born in Los Angeles, California, on October 9, 1996. Mohamed Hadid, her father, is a real estate entrepreneur, and Yolanda Hadid, her mother, is a former model. She has two siblings: Anwar, her younger brother, and Gigi, her older sister, who is also a model. From her father’s side, she has two half-sisters. She grew up on a ranch near Santa Barbara, California, with her siblings.

Despite having dropped out of school to pursue a modeling career, she has expressed interest in returning to school to study fashion photography.

In July 2014, she was arrested for driving while inebriated. Her driver’s license was suspended for a year, and she was sentenced to six months of probation.
She began dating Canadian musician Abel Makkonen Tesfaye, better known as The Weeknd, in 2015. In 2016, the pair called it quits.

Bella Hadid has a net worth of $25 million.