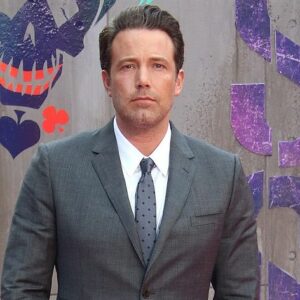 Ben Affleck, born Benjamin Geza Affleck-Boldt, is an American film actor, director, screenwriter, and producer. He grew up in Massachusetts after being born in California. He began acting at an early age, appearing in teleseries such as “The Voyage of the Mimi.” Affleck met his best friend, co-star, and co-writer Matt Damon in high school, with whom he co-wrote the script for the biggest film of his career, ‘Good Will Hunting.’ They were both nominated for an Academy Award and a Golden Globe for their script authoring. Affleck has been in films such as “Pearl Harbor,” “Armageddon,” “The Sum of All Fears,” “Changing Lanes,” “Smokin’ Aces,” “Gigli,” “He’s Just Not That Into You,” “Extract,” and “Forces of Nature,” among others. With the film ‘Gone Baby Gone,’ he made his directorial debut, and went on to direct and write the scripts for two more films, ‘The Town’ and ‘Argo.’ For his directing work on ‘Argo,’ he recently won a Golden Globe and a BAFTA. He has three children with actress Jennifer Garner, with whom he has been married for ten years. He is being considered for the role of Batman in the ‘Batman’ series, and there is a lot of public conjecture about it because people are still devoted to Christian Bale’s portrayal of the character.

Timothy Byers Affleck and Christine Anne Affleck are the parents of Ben Affleck. Before becoming a photographer, his father tried his hand at a variety of vocations. His mother was a Cambridge, Massachusetts, schoolteacher. He has a younger brother, Casey Affleck, who also works in the film industry.
His parents split up shortly after he was born, and they divorced in 1984. Affleck and his brothers relocated to Massachusetts after the divorce.
Affleck has always been interested in acting and has done small roles like as participating in a Burger King commercial. In 1984, he was cast in the PBS miniseries “The Voyage of the Mimi.” The crew of Mini was shown exploring the ocean in a science show.
Affleck went to Cambridge Rindge and Latin School, where he met Matt Damon, his co-star, co-writer, and close friend, who was two years his senior. Before Affleck’s major appearances in ‘Buffy the Vampire Slayer’ and ‘School Ties,’ they spent their time together doing underage drinking and smoking pot. He landed a prominent role in the cult classic ‘Dazed and Confused’ in 1990.

After a string of roles in the 1990s, including ‘Lifestories: Families in Crisis (1990)’, ‘School Ties (1992)’, ‘Dazed and Confused (1993)’, ‘Mallrats (1995)’, and ‘Chasing Amy (1997),’ Affleck tried his hand at directing with his 16-minute short comedy ‘Killed My Lesbian Wife, Hung Her on a Meat Hook, and
During this time, he became acquainted with director and writer Kevin Smith, and starred in his film ‘Jersey Girl.’ He also appeared in all of Smith’s ‘View Askenwniverse- Jersey’ films. He also made multiple appearances on ‘Saturday Night Live’ early in his career.
It was in 1997 when Affleck, together with fellow actor and close friend Matt Damon, earned a reputation for themselves. The film was based on a play written by Damon while at Harvard, which he showed to Affleck. They wrote it together in order to make it into a screenplay. They both went on to star in the film, which was about a complex math genius who works as a janitor at MIT.
Harvey Weinstein bought the script that Affleck and Damon developed together for a million dollars, and the film was nominated for several Oscars, winning two of them, including Best Original Screenplay. Affleck became an international superstar overnight as a result of the film’s success.
In 1998, Affleck landed a role in the action film ‘Armageddon,’ alongside Bruce Willis and Liv Tyler. Although the film received mixed reviews, it was a financial success.
He starred alongside Sandra Bullock in the romantic comedy ‘Forces of Nature’ in 1999.
In 2000, Affleck starred with his on-again, off-again lover Gwyneth Paltrow in the film ‘Shakespeare in Love.’
In 2001, Michael Bay, the director of ‘Armageddon,’ re-hired Affleck for his major motion picture ‘Pearl Harbor.’ The film was a big commercial success, but it received little critical acclaim.
In 2002, Affleck played ‘Jack Ryan’ in the film ‘The Sum of All Fears.’ The film is a techno-thriller that included actors such as Harrison Ford and Alec Baldwin in previous incarnations. He starred in the film ‘Daredevil’ in 2003. It was the film adaptation of the popular comic series, and it had been Affleck’s favorite since he was a child. The film starred his future wife Jennifer Garner and was a commercial success. He appeared in ‘Gigli’ the same year and ‘Surviving Christmas’ the following year. Both films were critically panned and did not perform well at the box office.
Affleck starred in HBO’s ‘Hollywoodland,’ a biography about the highly acclaimed and well-known artist George Reeves, in 2006. He was nominated for a Golden Globe and won the Best Actor prize at the Venice Film Festival.
In 2007, he directed ‘Smokin’ Aces,’ which received mixed reviews from critics but was a commercial flop. He directed his first film, ‘Gone Baby Gone,’ in the same year. It was based on a novel by Dennis Lehane, and Affleck also contributed scripting to the film. ‘Gone Baby Gone’ was not a box office hit, but Affleck’s direction was praised.
He appeared in films such as ‘He’s Just Not That Into You,’ ‘State of Play,’ and ‘Extract’ in 2009. In the film ‘He’s Just Not That Into You,’ Affleck co-starred with Jennifer Aniston, Justin Long, Bradley Cooper, Drew Barrymore, and others. The film was a middling success. ‘State of Play’ was a political thriller, and Affleck’s performance was praised by critics.
‘The Town,’ Affleck’s second directorial effort, was released in 2010. He collaborated on the film’s writing, which was based on the novel ‘Price of Thieves.’ The film received a mixed response from critics.
He directed another film, ‘Argo,’ in 2012, with George Clooney in the major role. For his direction in the film, he received a Golden Globe, Directors Guild of America awards, and a BAFTA award.
In 2013, he hosted ‘Saturday Night Live,’ a sketch comedy show.
Ben Affleck starred in David Fincher’s psychological thriller ‘Gone Girl,’ which was released in 2014. He played the role of a spouse who is accused of murder in the film.
He played Batman in the superhero picture ‘Batman v Superman: Dawn of Justice’ in 2016. In 2017, he returned to the role of Batman in the film ‘Justice League.’

For a year, he was in a relationship with Gwyneth Paltrow on and off. They split up in 1999 but remained close friends. In 2000, Affleck co-starred with Paltrow in the film ‘Shakespeare in Love,’ and the film’s director stated that the two have a great deal of respect for one another.
Affleck entered himself into a rehab facility for his drinking issue in 2001. He enlisted the support of his friend and actor Charlie Sheen in making the decision to enter a rehab facility to recover from his drinking.
In 2002, while filming ‘Gigli,’ Affleck and actress/singer Jennifer Lopez became close, and Affleck began making public declarations about how much he admires her, even showing up for her Pasadena restaurant’s debut. The couple chose to marry after dating for two years. They broke up four days before the wedding.
In 2004, Affleck began dating Jennifer Garner, his ‘Daredevil’ co-star, and made public declarations about wanting to create a family and settle down.
They married in a secret ceremony in Haiti in 2005. They share three children and live in Los Angeles, Massachusetts, New York, and Georgia, respectively.
Ben Affleck and Jennifer Garner announced their separation in 2015, and they filed for divorce in April 2017.
Ben Affleck is currently dating television producer Lindsay Shookus.

Hilarie Burton, an MTV correspondent, accused Ben Affleck of grabbing her at a TRL appearance in 2001 in October 2017. He was accused of caressing her breast while hugging her. Ben Affleck apologized for his irresponsible behavior in public. Affleck and Matt Damon starred in the HBO reality series ‘Project Greenlight,’ which aimed to assist outstanding screenwriters fulfill their goals.
Affleck helped to raise funds and awareness for a rare ailment known as ataxia-telangiectasia, a genetic disease that causes neurological deterioration. He pressed Congress to increase funding for additional illness research.

Ben Affleck has a net worth of $150 million.