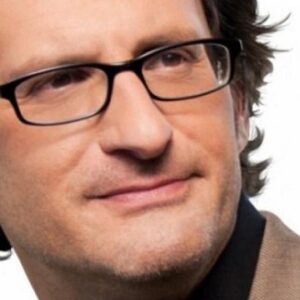 Ben Mankiewicz is a journalist, film critic, and television personality best known for hosting ‘Turner Classic Movies.’ He began his career as a producer at WJLA, the ABC affiliate in Washington, D.C., as a descendant of a renowned Hollywood family. In 1998, he worked as a reporter for WCSC-TV in Charleston, South Carolina, and also as an anchor for WAMI’s ‘The Times’ in Miami, Florida. In 1999 and 2000, the ‘New Times’ publication named him the ‘Best TV News Anchor in South Florida.’ His major break came in 2003, when he was chosen as the second presenter for Turner Classic Movies, alongside the network’s lead anchor Robert Osborne. He hosts classic cinema screenings, interviews Hollywood stars, and speaks on TCM cruises, among other things. From 2008 to 2009, he hosted the television series ‘At the Movies.’ He also appeared on the TYT Network’s ‘The Young Turks’ and ‘What the Flick?!’ as a co-host and pundit.

Ben Mankiewicz, who grew up outside of his family’s Hollywood culture, only became interested in movies after taking a cinema class at Tufts University while studying history. He learnt to enjoy old great movies, such as his grandfather’s ‘Citizen Kane,’ as well as the historical settings in which they were set. He began his television career as a sports reporter on the program ‘The George Michael Sports Machine,’ following in the footsteps of his brother Josh, who is also a TV reporter. He worked for George Michael and Glenn Brenner for two summers in a row.

After a few years as a reporter and anchor in Charleston and Miami, he joined Turner Classic Movies as a host in September 2003, which he describes as “the second-best job in television.” After Robert Osborne, he was only the network’s second-ever host. Ben, who spent the first three or four years in Osborne’s shadow, gradually emerged as a star in his own right, and was entrusted with increasing responsibility, which he views as a fantastic opportunity.

After being given the incredible opportunity to host TCM for the first time, Ben Mankiewicz faced a difficult path ahead of him. Many TCM viewers perceived him as a stand-in for legendary film reviewer Robert Osborne, who was regarded as the network’s heart and soul. The producers also intended to accentuate the disparities between the two, which aggravated his situation.

He was instructed to grow a beard, his writings became less reverent, and he was given a downtown loft as his set. Fans of the show slammed his appearance, demeanor, and even his worth as a film critic right afterwards. However, after fans recognized that his duty was to support rather than replace Osborne, they began to enjoy his hosting style.

His great-uncle is Joseph L. Mankiewicz, who received an Academy Award for ‘A Letter to Three Wives’ (1949) and ‘All About Eve’ (1950) for both ‘Best Director’ and ‘Best Writing, Screenplay.’ Josh is an NBC News correspondent, and his cousins are screenwriter Tom Mankiewicz and producer-filmmaker Nick Davis.

His father, a World War II veteran who participated in the Battle of the Bulge, went into politics after the war, serving as press secretary to Senator Robert F. Kennedy and presidential campaign manager to Senator George S. McGovern. His grandfather, who had grown skeptical of his own profession by that time, enthusiastically backed his father’s decision to pursue a career in politics. Ben grew raised in a political milieu, away from Hollywood, as a result of this.

He graduated from the Columbia University Graduate School of Journalism and Tufts University after attending Georgetown Day School. Ben, who was a co-captain on his high school basketball team, is a tremendous fan of former Oakland Athletics star Mitchell Page. He is also a big fan of Bruce Springsteen, the singer and musician, and he frequently travels to see his band, the ‘E Street Band.’ From 2005 to 2009, he was married to Contessa Kellogg. On the TCM Cruise in 2013, he married Lee Russo. Their daughter Josie and three pet dogs reside with them in Santa Monica, California.

Ben Mankiewicz net worth: Ben Mankiewicz has a net worth of $1 million as an American radio and television personality. In March 1967, Ben Mankiewicz was born in Santa Monica, California. He began his career as an anchor and reporter with WCSC-TV in Charleston, South Carolina, after graduating from Tufts University and Columbia University.