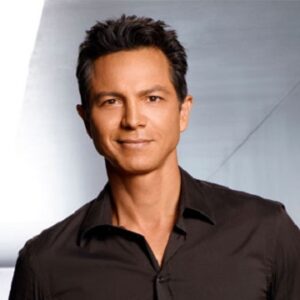 Benjamin Bratt is an American actor who rose to prominence after portraying NYPD Detective Reynaldo Curtis in the NBC drama series ‘Law & Order.’ In his debut film, ‘Juarez,’ and the two television programs ‘Knightwatch’ and ‘Nasty Boys,’ he played a number of characters who were active in police enforcement. Rey Curtis’ role, on the other hand, garnered him great exposure and critical acclaim. He has worked with Sandra Bullock, Michael Douglas, Halle Berry, and Benedict Cumberbatch in a number of feature films, including ‘Miss Congeniality,’ ‘Traffic,’ ‘Catwoman,’ ‘Ride Along 2’, and ‘Doctor Strange.’ Bratt, who was used to “blind casting,” or casting anyone for any character, was astonished to learn that his first parts in Hollywood were mostly stereotyped Hispanic roles. He was glad to play a Tlicho Indian in the film ‘The Lesser Blessed,’ nevertheless, as he was proud of his ancestry. He is actively involved in a number of nonprofit organizations that assist Native American concerns, including the American Indian College Fund. He is currently a member of the main cast of the TV show ‘Star.’

Benjamin Bratt was born in San Francisco, California, on December 16, 1963. His mother, Eldy, was a nurse, and his father, Peter Bratt, Sr., worked in the sheet metal industry. His parents split when he was four years old, in 1968.

His mother is a Native American activist who moved to the United States from Lima, Peru when she was 14 years old. She is from the Peruvian Quechua ethnic group. His father’s ancestors are English, German, and Austrian. George Cleveland Bratt, his grandpa, was a Broadway actor.

He and his four siblings had to move regularly between California and Alcatraz with his mother, who was involved in the Alcatraz prison takeover when he was around five years old. This early encounter had a big impact on him.

During his adolescence, he chose to live with his father, who encouraged him to act in a high school play, which led to him enrolling in college acting classes.

He was admitted into the M.F.A. program at the American Conservatory Theater in San Francisco after graduation but had to leave before completing the program when he was offered his first acting role.

Benjamin Bratt was cast in a television series in 1987, but the series was canceled after a disastrous pilot, and the telefilm ‘Juarez,’ in which he played a young Mexican-American lawman, was filmed instead. ‘Knight watch’ and ‘Nasty Boys’ were also short-lived drama shows in which he got important parts.

During the filming of ‘Nasty Boys,’ he formed a friendship with producer Dick Wolf, who would later go on to establish the television series ‘Law & Order’ and cast him in a significant part in its sixth season in 1994.

Critics praised him for his depiction of Detective Reynaldo Curtis, but he left the show in 1999 to spend more time with his family.

In the production of his films, he has assisted his filmmaker brother Peter Bratt, Jr. In 1996, he appeared in the film ‘Follow Me Home,’ directed by his brother and starring Salma Hayek. In 2009, he also starred in Peter’s independent film ‘La Mission.’

He appeared in the 2000 film ‘The Next Best Thing,’ alongside Madonna, and in the ensemble cast film ‘Traffic.’ In the same year, he was cast in the film ‘Miss Congeniality alongside his ‘Demolition Man’ co-star and friend Sandra Bullock.

In 2004, he played alongside Halle Berry and Sharon Stone in the superhero film ‘Catwoman,’ in which he received a big part. The film, however, did not perform well at the box office. He was cast as Jim Tisnewski in the Pentagon drama ‘E-Ring’ the following year.

In 2008-09, he played William Banks in the television series ‘The Cleaner.’ In 2009, he returned to the character of Rey Curtis in an episode of ‘Law & Order.’ He appeared in five episodes of the TV show ‘Modern Family’ as a guest star.

In 2009 and 2013, he performed vocal roles in both sections of the animated film ‘Cloudy with a Chance of Meatballs.’ In ‘Despicable Me 2,’ he also lent his voice to the character of Eduardo Perez.

He was cast in the guest role of Dr. Jake Reilly on the show ‘Private Practice’ in 2011, and he returned as the main character in the show’s next two seasons.

In the criminal drama ‘Law & Order,’ Benjamin Bratt’s portrayal of Detective Rey Curtis became his most well-known onscreen character. He appeared in telefilms based on the series and made guest appearances after the series ended.

For his portrayal in ‘Law & Order,’ Benjamin Bratt was nominated for a ‘Primetime Emmy Award’ for ‘Outstanding Supporting Actor in a Drama Series’ in 1999.

For the films and television programs on which he has worked, he has received four ‘ALMA Awards’ for ‘Outstanding Actor.’ He also received a ‘Screen Actors Guild Award’ alongside his ‘Traffic’ co-stars.

From 1990 through 1996, Benjamin Bratt dated documentary filmmaker Monika McClure. In 1996, he had a brief relationship with Jennifer Esposito, who appeared as a guest on his TV show ‘Law & Order.’

In 1998, he began dating Julia Roberts, an award-winning actress. However, four months after appearing together at the 2001 ‘Academy Awards ceremony, the high-profile couple split up.

Bratt astonished everyone when he married his pregnant girlfriend, actress Talisa Soto, on April 13, 2002, in San Francisco, despite rumors that he planned to settle down. They met in the early 1990s at an audition for ‘Blood In Blood Out,’ and began dating on the set of ‘Piero,’ in 2001. Sophia Rosalinda Bratt is the couple’s daughter, and Mateo Bravery Bratt is their son.

He is proud of his Native American origin and actively supports causes such as raising funding for Native American education and healthcare. He also narrated Native history in the award-winning PBS series ‘American Experience’ in the 5-part mini-series ‘We Shall Remain.’

Benjamin Bratt is an actor and producer from the United States with a net worth of $12 million.

Sophia Bratt, Benjamin Bratt’s daughter, was born with brain damage that left her with physical limitations. Bratt, who is a father, makes it a point to take on projects that allow him to spend more time at home with his daughter.