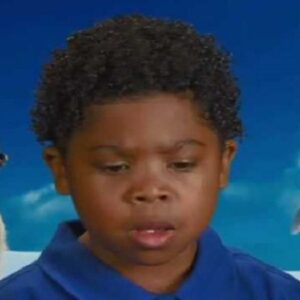 Benjamin Flores, Jr. commonly known as Lil’P-Nut is one of the coolest kids out there. He first achieved attention as a five year old when he won the ‘New Daisy Theatre Talent Show.’ He used to publish a lot of material on YouTube and also used to perform around town in barber shops, talent shows and in the Summer Jam. He could be a tiny kid but he is surely not regarded one! People who have socialized with him say that he can fit in nearly everywhere whether withgrown-ups or kids. Grown-ups who have socialized with him have noted that he behaves like an eighteen year old when he is around them and also like a typical youngster getting messy while playing with his childhood buddies. So, basically he is the best of both worlds! Flores also performed a commercial for ‘It’s All Good Auto Sales’which further contributed to his increasing popularity. He keeps on beat while he performs unique raps about school, his connection with God and a nasty dream he had one night. He adds that when he raps he does not cuss, still youngsters listen to him because he has rhythm and meaning in his songs. His performance on ‘The Ellen Degeneres Show’got him national attention which opened a lot of doors.

When Benjamin Flores initially started rapping, his father didn’t think too much about it, but when people started liking and complimenting him, he decided to place him in the ‘New Daisy Theatre Talent Show’in which he emerged as the winner. Word got around and his popularity soared and that is how his Memphis agent, Marcus Shaw came to know about him. Shaw called him up and tiny Benjamin rapped to him about God and education. That impressed Shaw so much that he requested Benjamin to meet him in Atlanta two days later. His “swag” stuck out and Shaw immediately called Meda Leacock, who worked for Puff Daddy and other high profile rappers. Shaw bought her an airline ticket and flew her to Atlanta to meet the boy. Just like Shaw, she too was swept away by his rhyming skills and without further ado signed on as his New York agent. Soon after,a local news channel broadcast about him and made him a national star which in turn drew the attention of ‘The Ellen DeGeneres Show’ producers. At age seven, Flores sung ‘You Might Be the One for Me,’an original love rap. Ellen found him adorable and the audience went wild. After that, producers fromthe Cartoon Network and the movie ‘Happy Feet 2’ approached him. He landed the role of Atticus, a rapping penguin in the film. After this, there was no looking back for the talented boy. Flores also starred in an episode of the TBS sitcom ‘Are We There Yet?’ His biggest job to date is his role as Louie Preston in the Nickelodeon programs ‘The Haunted Hathaways’ and ‘The Thundermans.’ Apart from this he has starred in other films such as ‘Ride Along’, ‘Santa Hunters’, ‘One Crazy Cruise’ and ‘Henry Danger.’ On June 13, 2016, Flores was confirmed as the new voice of Gerald Johanssen in ‘Hey Arnold!: The Jungle Movie.’ He is presently working on the Nickelodeon show ‘Game Shakers’ where he portrays one of the major characters called Triple G.

What Makes Benjamin Flores So Special?

Even though he is simply a child, his aptitude with wordplay and his acting prowess is anything but immature and juvenile. He has such a pleasant and sophisticated demeanor that he can easily socialize with everybody and everybody whether youngsters or even grown-ups. By his own admission, anytime he goes on Facebook he gets a lot of wonderful replies from other kids and people love his songs and also love watching his performances. He is regarded an inspiration to many because of the success he has attained and earned at such a tender age via sheer hard work and commitment.

Past Fame of Benjamin Flores Jr

Despite having gained so much fame and popularity at such a young age, the youngster is really down-to-earth and sweet-natured. He loves socializing with people of all age groups and seeks to be a positive role model to those kids who idolize him.

Benjamin Flores was born in Memphis but his family later went to Burbank, California since that’s the location for ‘Game Shakers.’
He and his older sister, Melissa are currently being homeschooled.

Benjamin is one of the wealthiest and most well-liked actors. Our analysis of Benjamin Flores Jr.’s net worth from sources like Wikipedia, Forbes, and Business Insider indicates that it is around $1.5 million.

He began his rap career at his stage name of Lil’P-Nut and achieved popularity for his song, ‘You Might Be the One.’