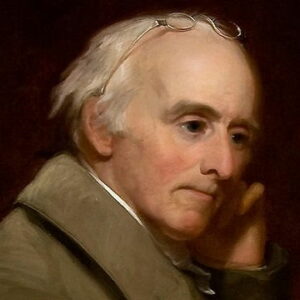 Benjamin Rush was one of the most important political leaders during the American Revolution. In 1776, he signed the U.S. Declaration of Independence. He was a doctor by trade, but he was also a teacher and a writer. Along with Benjamin Franklin, Thomas Jefferson, and John Adams, he was one of the most important people in the intellectual American Enlightenment. He believed that everyone should be free, and he spoke out against slavery and for women’s right to higher education. As a doctor, he was highly regarded, and he worked to improve the health and hygiene of the average person. He was the first doctor of his time to do groundbreaking work in psychiatry. Because of this, he is known as the “Father of American Psychiatry.” He was very interested in politics, so he joined the Sons of Liberty group in Philadelphia. He was chosen to be a representative of Pennsylvania in the Continental Congress, and on August 2, 1776, he signed the U.S. Declaration of Independence. He also helped Thomas Paine write the famous pamphlet “Common Sense,” which argued for America’s independence. In addition to his work in medicine, he is known for the social changes he worked for.

Benjamin Rush’s parents, John Rush and Susanna Harvey had him in Philadelphia. His father was a farmer who became a gunsmith. He died when Benjamin was only 5 or 6 years old.
In 1751, his mother moved to Philadelphia with her children and opened a grocery store to make a living for the family.

Benjamin and his brother were sent to live with his uncle, Rev. Dr. Samuel Finley so that they could get a good education. He went to the Nottingham Academy with his uncle’s help.
He went to the College of New Jersey in 1759, and in 1760, when he was only 15, he got a degree in arts.

In 1761, he went to work for Dr. John Redman as an apprentice, and he learned from him until 1766. During this time, he was able to meet famous doctors like John Morgan and William Shippen, Jr.

In 1766, he moved to Scotland to study medicine at the University of Edinburgh. In 1768, he got his Doctor of Medicine. He went to hospitals in London and Paris for the rest of the year.

In 1769, he moved back to Philadelphia and opened a medical office. He was also given a job as a chemistry professor at the College of Philadelphia.

While he was teaching, he wrote a few articles about medicine and published “A Syllabus of a Course of Lectures on Chemistry,” his first book on chemistry. He wrote a lot of essays about patriotic issues because he was a nationalist.
In the early 1770s, he took part in the activities of the Sons of Liberty, a group of American patriots, with great enthusiasm.

He helped Thomas Paine edit and publish his important pamphlet, “Common Sense,” which came out in January 1776 under an alias. The pamphlet came out at the start of the American Revolution. It made a case for getting rid of the colonial government.

In July 1776, the Continental Congress chose him to be a delegate from Pennsylvania. On August 2, 1776, he signed the U.S. Declaration of Independence.

In 1777, he became the Surgeon General for the Continental Army and helped care for soldiers who were hurt in battle. But he became more and more unhappy with how Dr. William Shippen ran the Army Medical Service, which led to a lot of political problems between the two men. In 1778, he quit because he was disappointed.

In 1784, he started working as a surgeon at the Pennsylvania Hospital, where he stayed until his death. He cared for people with mental illnesses and fought for them to be treated with more kindness.

He was elected president of the Philadelphia Medical Society, and in 1786, he started the Philadelphia Dispensary to help poor people get free medical care.
He kept practicing medicine and teaching until 1813 when he died.

His book, “A Syllabus of a Course of Lectures on Chemistry,” published in 1770, was the first chemistry textbook written in the United States.
In 1812, he wrote “Medical Inquiries and Observations on the Diseases of the Mind,” a very important book that made him known as the “father of American psychiatry.”

He was one of the 56 people who signed the Declaration of Independence of the United States. He signed for Pennsylvania on August 2, 1776, and was there to do so.

He worked hard to improve society. He helped poor people get free medical care, fought for women’s rights, and started many colleges to promote higher education.

In 1776, he married Julia Stockton, whose father was a lawyer. They had 13 kids, but four of them died when they were young.
He got typhus fever and died in 1813 when he was 68 years old.

In 1904, to honor his memory, the American Medical Association put up a bronze statue of him called the Rush Monument on the grounds of the U.S. Naval Museum of Hygiene and Medical School in Washington.

The Benjamin Rush Award is given to a business or government leader who has done a great job. It is given by Dickinson College in Pennsylvania, which he started. In 1985, the first award was given.

Benjamin is on the list of the most popular and wealthiest politicians. From what we can tell from Wikipedia, Forbes, and Business Insider, Benjamin Rush has a net worth of about $4 million.

He could speak English, Spanish, French, and Italian as well as other languages.
The Declaration of Independence was also signed by his father-in-law.

He was very against putting people to death.
He believed in God very much and helped start the African Methodist Episcopal Church.