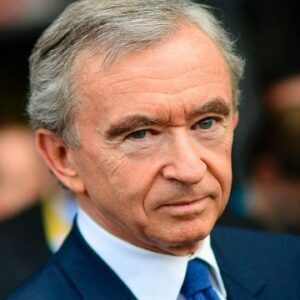 Bernard Arnault is a French business entrepreneur and investor who is currently France’s and one of the world’s richest people. Since 1989, he has been as Chairman and Chief Executive Officer of LVMH Mot Hennessy Louis Vuitton Company, and he is also the company’s largest stakeholder. Arnault, the son of a businessman, was born with a keen sense of business from an early age. He studied in the elite Ecole Polytechnique after graduating from high school and obtained a degree in engineering. Following graduation, the young man began working as an engineer at his father’s civil engineering firm, as well as planning for the company’s future growth and expansion. He persuaded his father to shift the family business’s focus to the rising real estate market, and he was a huge success in it. He then began acquiring more businesses, eventually becoming the owner of the famed Christian Dior label and the department store Le Bon Marché. When LVMH was formed through the merger of two enterprises, Arnault invested millions in the new company’s stock and became its first stakeholder. He eventually rose to the post of chairman of the executive management board, where he oversaw a massive expansion plan that converted the company into one of the world’s leading luxury conglomerates.

Bernard Jean Étienne Arnault, the son of Jean Leon Arnault, was born on March 5, 1949, in Roubaix, France. His father was a manufacturer who also controlled Ferret-Savinel, a civil engineering firm.
He went to Roubaix’s Maxence Van Der Meersch High School. After finishing high school, he enrolled in the elite École Polytechnique, where he earned a bachelor’s degree in engineering in 1971.

After graduating from college, he went to work for his father’s company. He began preparing for the company’s expansion and growth, and in 1976, he persuaded his father to sell the company’s construction sector and invest the money in a more profitable venture.

The Arnaults gained 40 million French francs from the construction division’s insolvency, which they put into the real estate business, which was thriving at the time. The company was renamed Ferinel and became a huge success, specializing in vacation rentals.

In 1974, Bernard Arnault was named director of company development, and in 1977, he was made CEO. In 1979, he took over as president of the corporation from his father.
After the Socialists took power in France in 1981, Arnault and his family were forced to relocate to the United States. He succeeded there, too, like the savvy businessman that he was, developing condominiums in Palm Beach, Florida. He eventually started a branch of his family’s real estate firm in the United States.
Of 1983, the political landscape in his native France shifted. Arnault opted to return home as the French Socialists turned to a more conservative economic agenda.

Bernheim assisted Arnault in raising the balance of the reputed $80 million acquisition price of Boussac Saint-Frères by investing $15 million of his own money. Arnault liquidated most of the company’s assets after this transaction, keeping only the iconic Christian Dior brand and the Le Bon Marché department store. In 1985, he was named CEO of Dior.

Arnault made $400 million after selling most of Boussac’s holdings. Henri Racamier, the company’s chairman, urged him to invest in LVMH in 1987. Arnault chose to invest in LVMH through a joint venture with Guinness PLC, which held 24 percent of the company’s stock. He continued to buy more shares in the company over the next few years, spending hundreds of millions of dollars in the process.

By January 1989, Arnault had amassed ownership of 43.5 percent of LVMH’s stock, as well as 35 percent of the voting rights. He was then chosen chairman of the executive management board by a unanimous vote.

Following his takeover of LVMH, he ousted several of the company’s top executives and chose to hire new talent to reinvigorate the business. He was a strict taskmaster who was known for promptly dismissing staff who did not meet his standards.

The buyout of the luxury goods conglomerate LVMH by Bernard Arnault was a bold move. In the systematic and well-calculated takeover of the company, he demonstrated his customary tenacity and ruthlessness, and his successful integration of numerous famous aspirational brands into the group has encouraged several other fashion corporations across the world to do the same.

Bernard Arnault has a net worth of $175 billion.

LMVH, Bernard Arnault’s company, is involved in a number of charitable endeavors. It sponsors Save the Children, the Foundation for Hospitals in Paris, and the Princess Grace of Monaco Foundation, among other humanitarian, scientific, and medical research organizations.

He is a well-known art collector who owns works by Picasso, Yves Klein, Henry Moore, and Andy Warhol.