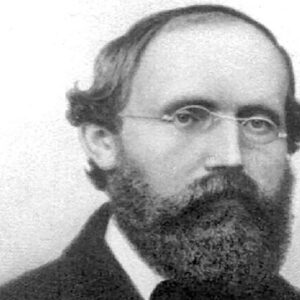 Riemann, Georg Friedrich Bernhard, was a German mathematician who made significant contributions to differential geometry, number theory, and complex analysis. He was born to a poor country pastor in the Kingdom of Hanover and shown exceptional mathematical abilities from an early age. He was sent to Hanover and subsequently Lüneburg for formal study after getting his elementary education at home. After that, he studied theology and philosophy at the University of Göttingen, with the objective of becoming a minister like his father. Around this time, he chose to follow mathematics as a professional path and moved to Berlin to study mathematics under prominent professors at the University of Berlin. He returned to Göttingen after receiving his bachelor’s degree and lived there for the rest of his life. He lived for only 39 years, but during that time he made substantial contributions to different disciplines of mathematics, influencing future research and establishing the groundwork for Einstein’s relativity theory.

Georg Friedrich Bernhard Riemann was born on September 17, 1826, in Breselenz, Germany, which is now part of the municipality of Jameln in the Lüchow-Dannenberg district. It was a distinct village under the Kingdom of Hanover at the time of his birth.

Friedrich Bernhard Riemann, his father, was a poor Breselenz Lutheran minister. Georg was the second of six children born to him and his wife, Charlotte nee Ebell. He had always been shy and introverted since he was a child.
Georg lost his mother when he was a child. Until the age of ten, he received his elementary education from his father. After that, a man named Schulz, a teacher at the local school, arrived to assist his father in their education.

Even back then, he had awe-inspiring mathematical abilities, particularly in calculus. As a result, in the Easter of 1840, he was transferred to live with his grandmother in Hanover, where he enrolled in the Lyceum’s third class.
Until his grandmother died in 1842, he studied at the Hanover lyceum. Following that, he enrolled at Johanneum Lüneburg, a traditional Lüneburg gymnasium (high school). He was a hardworking and good student who was particularly interested in Hebrew and theology, but his favorite subject was mathematics.
His initial desire was to follow in his father’s footsteps and become a priest to supplement the family’s income. But his mathematical abilities, which often outstripped his professors’ understanding of the topic, quickly drew the notice of the gymnasium’s director, Schmalfuss.

The director began lending him mathematics books from his own library after being impressed by his ability to answer complex mathematical problems. He once gave Bernhard Adrien Marie Legendre’s ‘Number Theory,’ which he mastered in six days. His purpose, though, remained the same.
Riemann began his studies at the University of Göttingen in the spring of 1846, majoring in theology and philosophy. Simultaneously, he began taking mathematics studies with Johann Carl Friedrich Gauss and Moritz Stern. His father ultimately gave him permission to devote himself to mathematics after noticing his passion in the topic.
The grade of mathematics at Göttingen at the time was relatively low, so Riemann transferred to the University of Berlin in the spring of 1847, graduating in 1849. He studied under illustrious academics such as Jacobi, Steiner, Eisenstein, and, most notably, Lejeune Dirichlet.

He returned to Göttingen for his PhD studies in 1849. Wilhelm Weber had returned to a physics chair this time, and Johann Benedict Listing had been promoted to professor of physics. Working with them provided Riemann with a solid theoretical physics foundation. He studied topology as well as Listing.

Johann Carl Friedrich Gauss served as his doctoral advisor. Riemann submitted his PhD thesis in November 1851 and defended it in December, working on the theory of complex variables and what we now call ‘Riemann surfaces.’
‘Grundlagen für eine allgemeine Theorie der Funktionen einer veränderlichen complexen Größe,’ was the title of his dissertation. His art was astonishingly original, despite being based on the works of Augustin-Louis Cauchy and Victor Puiseux. It looked at analytic functions’ geometric features, conformal mappings, and surface connectivity.

On Gauss’ advice, Riemann began his career as a Privatdozent at the University of Göttingen in 1852. Concurrently, he also worked for Weber without any remuneration. Simultaneously, he began studying for his Habilitation, which would allow him to be hired as a lecturer.

He chose the Fourier series on heat flow for his Habilitationsschrift (probationary essay), which he submitted at the end of 1853. It was a work of art that made significant headway in resolving some of the foundational concerns raised by French mathematician Joseph Fourier in his work ‘Théorie analytique de la chaleur.’
Gauss chose the third of three possible subjects for his Habilitationsvortrag (probationary lecture) from a list of three. ‘Über die Hypothesen, die der Geometrie zu Grunde liegen,’ it was titled (On the hypotheses that underline geometry).

On June 10, 1854, he gave a lecture that introduced not only the n-dimensional Riemannian manifold, but also its curvature tensor and the relationship between mathematical and physical space. The latter, on the other hand, was left as a theory for sixty years until Einstein proved it.

Riemann continued to work as a privatdozent after completing his habilitation. He was not paid for the role, but he was able to collect fees from his students. His first lesson was on partial differential equations with physics applications, and he only had a few pupils.

With Gauss’ death in 1855, Dirichlet took over his chair. Dirichlet then attempted to recruit Riemann for the position of extraordinary professor, but after failing, he found him another tiny job.
Riemann, who now receives a yearly income of 200 taler, focuses on his work. During the years 1855-1856, he gave lectures that led to the publishing of his ‘Theory of Abelian Functions.’ It is now regarded as one of the most significant works in mathematics.

Riemann was appointed an Extraordinary Professor at the University of Göttingen in 1857, with a yearly salary of 300 taler. He became financially secure for the first time in his life.
With the death of Dirichlet in 1859, Riemann was promoted to full professor. In the same year, he was chosen as a corresponding member of the Berlin Academy of Sciences. Berlin mathematicians Kummer, Borchardt, and Weierstrass proposed his membership.

Another masterwork was his initial paper to the Academy, titled ‘On the number of primes fewer than a specific size.’ It had a considerable impact on the direction of mathematical study over time.

Pleuritis struck him in 1862, and he battled it off and on for the rest of his life. After that, he took a leave of absence from his university and spent the winters of 1862-1863 in Sicily, where the climate was warmer.
Following that, he toured around Italy, meeting a number of mathematicians, including Betti. He returned to Göttingen in June 1863, but as his health deteriorated, he travelled to Italy once more, residing there from August 1864 to October 1865 before returning to Göttingen.

Riemann stayed in Göttingen until June 1866, when he relocated to Selasca on the banks of Lake Maggiore. He continued to write throughout this time, penning a number of publications that were ultimately discovered in manuscript form after his untimely death.

Bernhard Riemann is most known for his innovative approaches to geometry research. He claimed that space may have limitless dimensions and that a surface did not have to be depicted in three dimensions.
He’s also known for his contributions to number theory, complex analysis, and function theory. Eugenio Beltrami was motivated by his work to provide a description of non-Euclidean geometry, which served as the mathematical foundation for Albert Einstein’s theory of relativity.

Bernhard Riemann married Elise Koch of Körchow, Mecklenburg-Schwerin, on June 3, 1862. She was a friend of his sister’s. Ida, the couple’s daughter, was born in Pisa in 1863.
Riemann contracted a severe cold in the autumn of 1862, shortly after his marriage, which progressed to pleuritis. He travelled to Italy to cure his condition, as was customary at the time, but despite brief recoveries, his health began to deteriorate.

By the middle of 1866, he was seriously ill. In June, he set out for Selasca, an Italian town on the shores of Lake Maggiore, arriving on the 16th. On July 19, he sat under a fig tree, taking in the scenery and working on his last unfinished paper on natural philosophy.

Bernhard Riemann died of consumption the next day, while his wife sat beside him, saying the Lord’s Prayer. He was thirty-nine years old and fully cognizant at the time of his death. He is interred in Italy’s Biganzole Cemetery.
Numerous terms in mathematics have been named after Riemann, including ‘Riemann bilinear relations,’ ‘Riemann conditions,’ ‘Riemann form,’ ‘Riemann function,’ and so on.
In his honor, a lunar crater near the Moon’s northern limb has been called Riemann.
Riemann only published a few publications during his lifetime. However, his legacy lives on in the ‘Collected Works of Bernhardt Riemann,’ published posthumously in 1892.

In his short life, Bernhard Riemann earned a reputation as a brilliant mathematician. He had a great affinity towards philosophy at the same time, and many feel that if he had lived longer, philosophers would have claimed him as one of their own.
It’s probable that he had tuberculosis for a long time before he became ill. His poor health as a child, as well as the premature deaths of his mother, one brother, and three sisters, are evidence of this.