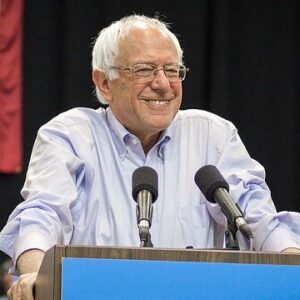 Bernie Sanders is a Vermont-based American politician and junior United States senator. In 2016, he sought unsuccessfully for the Democratic presidential nomination, finishing second to Hillary Clinton with 46% of pledged delegates. Sanders is the longest-serving independent in US congressional history, despite being a Democrat. He previously served for two years as chair of the ‘Senate Veterans’ Affairs Committee.’ He is a politician with a long and famous career. He’s also a member of the Congressional Progressive Caucus, which he co-founded. Sanders was up in a middle-class family in Brooklyn, the son of Jewish parents. He went to the ‘University of Chicago,’ where he became involved in the civil rights movement and served as an organizer for the ‘Student Nonviolent Coordinating Committee.’ He was intelligent and ambitious from an early age. Over the next few years, his interest in politics grew, and he was elected mayor of Burlington, Vermont’s most populated city, in 1981. He rose to prominence as a politician and was elected to the ‘United States House of Representatives.’ As his position in the national political arena expanded, he formed a caucus with the Democrats. He stated in 2019 that he would run for the Democratic presidential nomination in 2020.

Bernard Sanders was born in Brooklyn, New York City, on September 8, 1941, to Dorothy and Elias Ben Yehuda Sanders. After arriving to the United States in 1921, his father worked as a paint dealer, while his mother was born in New York City to Jewish parents from Russia and Poland.
Sanders was up in Midwood, Brooklyn, and attended ‘PS 197,’ a public primary school. He was a basketball player for his school team and won a borough title.
In the afternoons, he went to ‘Hebrew school,’ and in 1954, he celebrated his bar mitzvah.
He witnessed the horrors of ‘World War II’ as a child. He realized the importance of politics after witnessing the events of ‘World War II.’ As a result, he developed a passion for politics. He did well in his high school, ‘James Madison High School,’ and was a good student. His mother died shortly after he graduated from high school, and his father died two years later.
In 1959–60, Sanders attended ‘Brooklyn College’ for a year before enrolling in the ‘University of Chicago.’ During his college years, he was active in the civil rights movement and worked as an organizer for the ‘Student Nonviolent Coordinating Committee.’ In 1964, he earned a Bachelor of Arts degree in political science. Bernie Sanders spent the following few years working in a variety of capacities, including as a filmmaker and freelance writer. He also spent time on an Israeli kibbutz for a few months. During the 1960s, his interest in politics intensified, and he entered politics in 1971 as a member of the ‘Liberty Union Party.’
After leaving the ‘Liberty Union Party’ in 1977, he began working as a writer and the director of the nonprofit ‘American People’s Historical Society’ (APHS). He was elected mayor of Burlington by barely 12 votes in 1981.
He enacted significant changes in progressive taxation, environmental preservation, child care, women’s rights, youth programming, and the arts. He was a popular mayor who was re-elected three times, defeating both Democratic and Republican rivals each time.
He was elected to the ‘US House of Representatives’ in 1990. He needed to find political allies to pursue his issues as an independent candidate. As a result, he formed a caucus with Democrats, co-founding the ‘Congressional Progressive Caucus.’ He was an ardent critic of the ‘Iraq War,’ and he was concerned about the social and financial consequences. Sanders was a member of the ‘House’ from 1991 until he was elected to the Senate.
In 2006, he ran for the Senate against Richard Tarrant, a Republican businessman. On January 3, 2007, he was elected to the United States Senate from Vermont and took office.
Sanders, as a senator, wrote an open letter to Treasury Secretary Henry Paulson in 2008, criticizing the initial bank bailout proposal. Sanders’ 812-hour speech against the ‘Tax Relief, Unemployment Insurance Reauthorization, and Job Creation Act of 2010′ drew a lot of media attention in 2010.
He was already a well-liked politician, but his popularity skyrocketed after the speech. Citizens who were pleased by Sanders’ stance on taxes and insurance submitted online petitions asking him to run for president in 2012. Even well-known figures like Rabbi Michael Lerner and economist David Korten, who shared his progressive viewpoints, backed him up.
He has served on the ‘Committee on Budget,’ ‘Committee on Health, Education, Labor and Pensions,’ ‘Committee on Veterans Affairs,’ and the ‘Joint Economic Committee’ as a senator. Sanders sits on the ‘Energy and Natural Resources Committee’ and the ‘US Senate Committee on Environment and Public Works.’
Bernie Sanders has been a vocal critic of US foreign policy, particularly the ‘Iraq War.’ He is an outspoken supporter of LGBT and civil rights, as well as an outspoken opponent of mass surveillance and racial prejudice in the criminal justice system. He announced in 2015 that he would run for President of the United States in the 2016 presidential election on behalf of the ‘Democratic Party.’ In 2016, he came in second to Hillary Clinton for the Democratic presidential nomination. Sanders sponsored legislation in April 2017 to raise the minimum wage for government contract workers from $12 to $15 per hour.
Since 2017, he has served as the Chair of the Senate Democratic Outreach Committee.
He started webcasting ‘The Bernie Sanders Show’ on Facebook in February 2017. Sanders became the most popular politician in the United States as a result of this.
On May 9, 2018, Sanders introduced the ‘Workplace Democracy Act.’
Sanders defeated businessman Rich Tarrant by a 2-to-1 margin in the most expensive political race in Vermont history. In 2012, he received 71 percent of the vote, and in 2018, he received 67 percent of the vote.
Sanders stated on ‘Vermont Public Radio’ on February 19, 2019, that he would run for President of the United States in the 2020 election as the Democratic Party’s nominee.

Bernie Sanders married Deborah Shiling in 1964 and divorced her in 1966. After that, he began dating Susan Campbell Mott, with whom he had his son Levi Sanders in 1969.
Jane O’Meara Driscoll, whom he married in 1988, was his first wife. Jane’s three children from a previous relationship are considered his own. He has seven grandchildren as well.
In the comedy film ‘My X-Wedding Girlfriend’s Reception,’ directed by Martin Guigui, he played Rabbi Manny Shevitz.
Sanders received 10.2 percent of the vote in a readers’ poll conducted by ‘Time’ magazine, and was named ‘2015 Person of the Year.’
‘Brooklyn College’ awarded him a ‘Honorary degree of Doctor of Humane Letters’ on May 30, 2017.