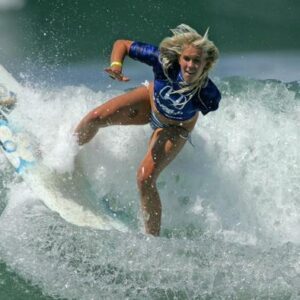 Bethany Meilani Hamilton Dirks is an American competitive surfer who lost her arm to a violent shark and stunned the world by returning to the sport victorious after overcoming this traumatic tragedy. She had always aspired to be a professional surfer since she was a child who loved surfing. Her parents, who were also surfers, began teaching her when she was five years old, and she competed in her first surf competition when she was eight years old, at the Rell Sun Menehune tournament on Oahu. Her confidence and love for the sport grew as a result of her victory in the tournament. Over the next few years, she rose through the ranks of amateur surfing competitions with ease, becoming into a powerful competitor on the water. She was barely 13 years old when a pleasant morning surf turned into a nightmare when a shark attacked her, ripping her left arm in half. Despite losing a lot of blood, the brave girl managed to survive the onslaught. She was extremely traumatized by the incident, but she resolved not to let it derail her career goals. Within weeks of the event, the courageous girl returned to surfing and became a source of inspiration and hope for millions of people all around the world.

Bethany Hamilton was born on the island of Kauai, Hawaii, on February 8, 1990, to Tom and Cheri Hamilton. Noah and Timmy are her two older brothers.
Her entire family enjoyed surfing, and her parents began teaching her how to surf when she was just five years old. Surfing was in her blood, and she was immediately enamored with the sport.

Her family is deeply religious, and they have a strong belief in God. Bethany, like her parents, began her relationship with God at a young age, when they fervently taught her about God and read her Bible stories.
She competed in her first real surf competition in 1998, winning both the short and long board divisions in the Rell Sunn Menehune Surfing Championships on Oahu, Hawaii. Bethany was itching to become a professional competition surfer after her first competitive victory.

She obtained her first major surf sponsorships from Rip Curl and Tim Carroll Surfboards when she was just nine years old. She steadily climbed the rankings in amateur surfing competitions over the next few years, winning multiple tournaments.

She went for a morning surf with her best friend Alana Blanchard and her family on Kauai’s Tunnels Beach on October 31, 2003. She was lying on her surfboard with her left arm swinging in the ocean, enjoying a relaxing day when a tiger shark came from beneath the surface and attacked her.

The attack caught her off guard, and she was stunned to see that the shark had bitten off her left arm just below the shoulder. Alana and her father raced to her aid, and she was taken to Wilcox Memorial Hospital shortly after.
On her trip to the hospital, she had lost a lot of blood and was numb. One of the paramedics held her hand on the way to the hospital and promised her that God would take care of her.

Doctors initially told her parents that she had a poor chance of surviving. Despite the odds, she stubbornly fought on and survived. She was severely traumatized by the tragedy, but she refused to let it overshadow her passion for surfing. She returned to surfing just a few weeks after the attack. She utilized a custom-made board that was longer, thicker, and had a handle for her right arm when she returned to surfing. With practice, she was able to use regular equipment.

On January 10, 2004, she competed in her first big competition after the attack. Returning to the competitive arena energized her, and she was determined not to let her disability hold her back from achieving her professional goals.
In her autobiography, ‘Soul Surfer: A True Story of Faith, Family, and Fighting to Get Back on the Boar,’ she talked about her experiences with the shark attack and her remarkable recovery and comeback in 2004. The book was a huge success and a best-seller.

Following the popularity of her book, she became a celebrity and appeared on shows such as ‘The Biggest Loser,’ ’20/20,’ ‘Good Morning America,’ ‘Inside Edition,’ ‘The Oprah Winfrey Show,’ ‘The Ellen DeGeneres Show,’ and ‘The Today Show.’

‘Soul Surfer: A True Story of Faith, Family, and Fighting to Get Back on the Board’ was released in 2011 as a biographical drama film based on her autobiography. Bethany is played by Anna Sophia Robb, with Helen Hunt and Dennis Quaid as her parents in the film. The crowd reacted positively to the film.

In 2004, she earned the ESPY Award for Best Comeback Athlete and the Courage Teen Choice Award.
The United States Sports Academy presented her with the “Mildred Babe Dirdrikson-Zacharias Courage Award” in 2005.

In 2012, she met Adam Dirks, a youth preacher, and they became close friends. In August 2013, they married in a grandiose ceremony in front of 300 friends and family members. In June 2015, the couple welcomed their first child, a boy.

Bethany Hamilton is a professional surfer from the United States with a net worth of $2 million. Bethany Hamilton, a native of Kauai, Hawaii, began surfing in elementary school and won her first major competition at the age of seven. She finished second in the Women’s Division of the National Scholastic Surfing Competition when she was 12 years old.