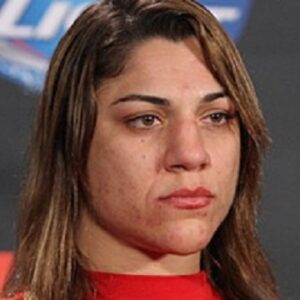 Bethe ‘Pitbull’ Correia is a Brazilian mixed martial artist who competes in the women’s bantamweight division of the Ultimate Fighting Championship. She grew interested in MMA after training in Sanda, a Chinese self-defense fighting sport, while working as an accountant. After a chance meeting with Bellator Featherweight Champion Patricio Freire, who pushed her to compete in pro MMA, she resigned her job and began competing in professional MMA. Because of her friendship with the ‘Pitbull’ brothers, she was given the moniker ‘Pitbull.’ She began her professional fighting career in Brazil in 2012, winning six consecutive fights in just over a year and gaining a contract with the UFC (Ultimate Fighting Championship), being only the third Brazilian woman to do so. She is a striker recognized for her grappling and boxing skills. Kickboxing is her preferred striking style, and wrestling is her favorite grappling technique. She’s also known for tormenting her opponents verbally before battles. While her fighting prowess has won her a considerable following, she has a habit of alienating her fans by making angry statements about her opponents. The former accountant hopes to gain a lot of money by winning a lot more fights in the future, and she plans to invest wisely after she retires from professional fighting.

Bethe Correia was born on June 22, 1983, in Campina Grande, Paraba, Brazil, in the northeastern interior. She was the youngest of four children of a banker in Campina Grande, and as a child she was obstinate and fiery.She planned to follow in her father’s footsteps and obtain an accounting degree from the School of Accounting.

She went on to work as an accountant, but soon found she was “too energetic for office work.”She married while still in school and began to acquire weight, prompting her to begin working out in order to relieve boredom and lose weight. Patricio Freire, who heard her smacking on a punching bag at a gym in Natal, Brazil, around this time, instantly offered her training at his own gym.

Patrcio and Patricky Freire, the “Pitbull” brothers, taught her jiu-jitsu, Sanda, and amateur wrestling methods, and she achieved her blue belt in Brazilian Jiu-Jitsu and her purple sash in Kung Fu. While she had no intention of fighting professionally at first, she began to enjoy her fights and felt a feeling of completion, leading her to decide to compete in mixed martial arts.

A Career in Mixed Martial Arts

In May 2012, Bethe Correia made her professional debut against Daniela Maria da Silva at the First Fight: Revelations event in her native Brazil. She went on to win five more fights in the next 13 months after winning the fight by unanimous decision.In October 2013, she was offered a multi-bout deal with the Ultimate Fighting Championship, which she accepted. She is always looking for opportunities to fight world-class competitors. Her maiden bout was on December 7, 2013, in Brisbane, Australia, at UFC Fight Night: Hunt vs. Bigfoot, where she faced MMA veteran Julie Kedzie, who had competed in 28 professional fights to her six. She did, however, win the battle on a split decision.

She then moved to the United States for her next two UFC fights, where she faced Jessamyn “The Gun” Duke of “The Four Horsewomen” on April 26, 2014 at UFC 172 in Baltimore, Maryland. She was able to deliver blows on the fly, reducing the distance between herself and the much taller Duke, and winning the battle by unanimous decision.
Her next fight in the United States was on August 30, 2014, at UFC 177 in Sacramento, California, against Shayna Baszler, another member of ‘The Four Horsewomen.’ She successfully evaded a submission attempt in the first round and won by TKO in the second round at 1:56 minutes.

Sarah Kaufman and Miesha Tate, both former Strikeforce bantamweight champions, challenged her with a 9-0 record and three consecutive UFC victories. However, after two victories over two ‘Horsewomen,’ she set her sights on another ‘Horsewoman,’ Ronda Rousey, the owner of the UFC bantamweight championship belt at the time.
Following her aggressive title shot campaign against Rousey, one of the world’s most feared fighters, UFC confirmed the fight for August 1, 2015, at UFC 190 in her home country of Brazil. Rousey came into the bout with an unblemished 11-0 record and a 15-1 odds against Correia, and she won by knockout in only 34 seconds of the first round.

After that, Bethe Correia claimed that she was interested in fighting Miesha Tate and Jessica Eye, but that both had declined. Eye, on the other hand, refuted her claim and volunteered to fight her in the spring of 2016.
Her next UFC fight came against Raquel Pennington on April 16, 2016 in Tampa, Florida at UFC on Fox: Teixeira vs. Evans. Despite the fact that both women bled profusely throughout a three-round brawl, Correia was defeated by a split decision.She challenged Jessica Eye at UFC 203 in Cleveland, Ohio, on September 10, 2016, after suffering two consecutive losses. Eye edged out her opponent and won the fight on a split decision in her hometown.

On March 11, 2017, she fought Marion Reneau in Fortaleza, Brazil at UFC Fight Night: Belfort vs. Gastelum. Even though Reneau disputed the verdict, claiming that she was the clear winner in the final two rounds, the bout resulted in a majority tie.On June 17, 2017, she fought former champion Holly Holm at UFC Fight Night: Holm vs. Correia in Singapore. One minute into the third round, she was knocked out with a head-kick knockout. Despite the fact that her post-fight brain scan revealed no major injuries, the UFC imposed her a six-month medical suspension.

Bethe Correia has gone undefeated during the first nine fights of her professional career. She fought in the first three UFC fights of her career at this time. She is the third woman from Brazil to be signed to the UFC.
She has fought in pro MMA since 2012 and has ten wins from 14 fights, including two knockout victories. In 2017, she also received a majority draw against Marion Reneau.

When Bethe Correia was studying accounting, she married for the first time. However, she divorced her spouse after she began professional fighting, as he was uninterested in her new vocation.Her longtime lover Edelson Silva, a former fighter and one of Anderson Silva’s boxing teachers, ultimately married her. He also serves as her instructor, and her manager is her sister, Suzana Correia.Bethe Correia was dubbed “one of the most unlikely UFC championship candidates ever” when she initially began training because she had no intention of competing professionally.

She began gaining weight in 2011 as a newlywed woman, and in order to decrease weight, she began MMA training.
While traveling with her boyfriend Edelson Silva and her sister Suzana Correia in Rio de Janeiro in March 2015, she got into a street fight with a taxi driver. Despite the fact that the fight concluded in a police report, she continued to get death threats on social media with photographs of guns.