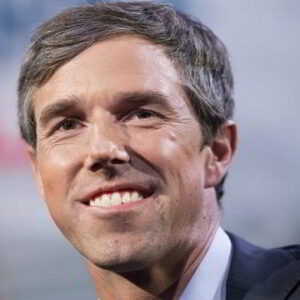 Beto O’Rourke is a politician and businessman from the United States. He has served as the United States Representative representing Texas’ 16th congressional district since 2013. Beto worked as a musician in a punk band and did a variety of odd jobs in New York before entering politics. He believed that boosting the community’s economy was his vocation, so he founded Stanton Street, a service-based business. Simultaneously, he served as a volunteer for numerous lawmakers, assisting them throughout their campaigns. During this period, he was inspired to enter the public arena and make a positive difference in his neighborhood. He ran for City Council for the first time in 2005 and was elected; he was re-elected twice and served on the El Paso City Council until June 2011. He was then elected to the United States House of Representatives. He continued to be actively involved in El Paso’s economic development. After deciding to run for Senate in 2018, he became a more prominent player in the political world. Despite losing by a razor-thin margin, his energetic campaign and meticulous preparation garnered him public admiration and affection. Beto O’Rourke’s rising popularity has fueled rumors that he would run for President of the United States in 2020.

Robert Francis O’Rourke was born on September 26, 1972, in El Paso, Texas. Pat Francis O’Rourke and Melissa Martha O’Rourke gave him the moniker “Beto.” The family lived in the Kern Place area of Los Angeles.
Beto attended Rivera Elementary School before moving on to Mesita Elementary School. He eventually transferred to Woodberry Forest Institution in Madison County, Virginia, a boarding school. Beto worked as a summer congress intern for Ron Coleman before graduating from high school.
He chose to study English Literature at Columbia University after graduating from high school. In 1995, he earned a Bachelor of Arts degree. During his time at Columbia, he was an active rower who even co-captained the team’s heavyweight rowing crew.
During his time at Columbia University, O’Rourke was a member of the band ‘Foss,’ which was dedicated to punk music. The band performed around the United States and Canada, and in 1993, they published a record called “The El Paso Pussycats.” He moved on to another band, Swedes, where he drummed until 1995.

Beto’s early work experience was varied. He began his career as a live-in nanny in Manhattan, then moved on to Hedley’s Humpers as an art mover, then joined his uncle’s online services firm, and eventually worked as a proofreader at H. W. Wilson Company in New York.
He returned to his hometown in 1998 because he missed his family. He also co-founded Stanton Street Technology, a software service company, in order to address the status of teenage unemployment. During his time in office, he published Stanton Street and was active in civic affairs.
His interest in politics grew after he began working for the local government. He volunteered for local legislators Jose Rodriquez and Eliot Shapleigh as part of their campaign. Ray Caballero’s ideas really impressed him. After Caballero was defeated for the second time, he decided to run for office.
Beto’s enthusiasm in improving and developing El Paso, as well as ending corruption, drove him to run for office. His friends and mentors convinced him to run for City Council after he had chose to run for County Judge.
In 2005, O’Rourke stood for the El Paso City Council, pledging to enhance local growth and border norms. He ran for office alongside his buddies Byrd and Ortega, and they all won. They were dubbed the ‘progressives’ as a group.
He was re-elected to the City Council in 2007. During his second tenure, he received a lot of flak for supporting a development proposal that included uprooting an ancient neighborhood. The idea fell through due to significant opposition from activists and local merchants.
In 2009, O’Rourke made headlines when he proposed an investigation into the drug war. His colleagues were unanimous in their support for his efforts to seek a better alternative. He also held a number of conferences to further his ideas.
In 2012, he decided to run for Texas District 16 against Silvestre Reyes. His grassroots effort, together with his progressive principles, was well-received by the public. He held a town hall meeting every month and eventually won the election.
The Border Enforcement Accountability, Oversight, and Community Engagement Act was signed into law by Beto and Steve Pearce in 2013. The Consolidated and Further Continuing Appropriations Act was also a favorite of his. El Paso was put on the map because to these efforts.
In 2014, O’Rourke was re-elected with 67 percent of the popular vote. He was seen traveling to Israel during this time, along with other peace negotiators and politicians.
In the months leading up to the 2016 presidential election, O’Rourke publicly endorsed Hillary Clinton for President. Beto was a member of Congress at the time and served as a superdelegate to the Democratic National Convention.
Beto stated in 2015 that he would run for re-election to a third term. He then won the Democratic primary and went on to win the general election.
Beto O’Rourke resigned up his House position in 2017 to run for the Senate in 2018. Several others questioned his decision, with the media emphasizing the obstacles he faced because Texans hadn’t elected a Democrat in over two decades.
On March 31, 2017, Beto publicly declared his candidacy for the United States Senate. Ted Cruz, the incumbent Republican, would be his opponent. In March 2018, he was named the Democratic Party’s nominee after receiving 61.8 percent of the public vote.
O’Rourke ran a good campaign that avoided slandering any of his opponents. It made extensive use of social media and Beto’s online presence. Several of his videos went viral, and he began to receive widespread support. He did, however, lose the race to Ted Cruz by a razor-thin margin.
There have been whispers that Beto may run for President of the United States in the 2020 elections. His successful Senate race has positioned him as one of the Democratic Party’s most prominent contenders.
On the other hand, O’Rourke has said that he will not be running for President in 2020. He has stated in recent press appearances that he is unsure of his plans because it is too early.

The National Press Club awarded Beto O’Rourke and colleague Texas congressman Will Hurd the Prize for Civility in Public Life in July 2018. They were the first Texans to get the award.

Beto O’Rourke and Amy Hoover Sanders have been married since September 24, 2005. In 2003, the couple met on a blind date and have been together ever since. Ulysses O’Rourke, Molly O’Rourke, and Henry O’Rourke are the couple’s three children.
The family currently resides in El Paso’s Sunset Heights neighborhood. Beto is a practicing Catholic who attends the local Roman Catholic Church.
On September 27, 1998, O’Rourke was arrested for intoxicated driving in Anthony, Texas. After completing a court-ordered program, the charges against him were dropped in October 1999. His opponents frequently criticize this blight in his early life.

Beto O’Rourke has a net worth of $9 million.

Ulysses, his first kid, is named after his favorite book by Irish author James Joyce of the same name.