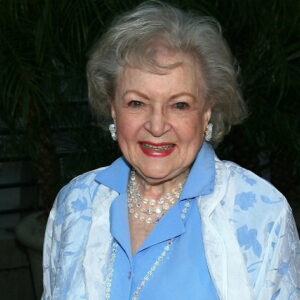 Betty White is an actress, author, animal rights activist, TV personality, and comedienne from the United States. She has also worked as a producer and is regarded as one of the early pioneers of American television, having worked both behind and in front of the camera in the early days of the medium. She was given the honorary title of ‘Mayor of Hollywood’ for being the first woman to produce a sitcom. For her roles in sitcoms, game shows, and humor television shows, she has won numerous honors. She was dubbed the “First Lady of Game Shows” because of her role on game shows. Her 80-year career as a singer, actor, host, and producer made her the longest-serving female celebrity in the entertainment industry. Her interest in acting grew during her school years, despite her initial plans to be a writer. She rose to prominence in the entertainment industry after beginning her career by voicing commercials on radio stations.

Betty Marion Ludden White was born on January 17, 1922, in Oak Park, Illinois, United States. Christine Tess and Horace Logan White, an executive at a lighting firm, raised her as their only child. She is a mix of Danish, Greek, English, Welsh, and Canadian ancestry.
She attended Beverly Hills’ ‘Horace Mann School’ and ‘Beverly Hills High School.’

After being turned down by film studios, Betty White turned to radio to read advertising and perform small roles in plays.
She made her first appearance on television three months after graduating in 1939, singing songs from the opera ‘The Merry Widow.’
She appeared in films such as ‘The Great Gildersleeve,’ ‘Blondie,’ and ‘This is Your FBI,’ and hosted her own radio show, ‘The Betty White Show,’ in the 1940s.
She co-hosted the daily live show ‘Hollywood on Television’ with Al Jarvis for four years starting in 1949.
She continued to appear in TV commercials throughout the 1950s, including ones for ‘Dr. Ross Dog Food’ and other products.
In 1952, she established her production business, ‘Bandy Productions,’ and produced the comedy ‘Life with Elizabeth,’ in which she starred.
From 1952 until 1955, White’s syndicated show ‘Life with Elizabeth’ afforded her complete authority on both sides of the camera.
She created and presented NBC’s daily chat show ‘The Betty White Show’ for a short time in 1954. She created a sitcom with the same title in the 1970s.
She was a commentator on the ‘Tournament of Roses Parade’ show with co-host Lorne Greene from 1955 through 1975. She starred as Vicki Angel in the sitcom ‘Date with the Angels’ from 1957 to 1958.
In 1962, she made her big screen debut in the feature drama film ‘Advise & Consent,’ in which she played the lead part.
She co-hosted the game program ‘Password’ with Allen Ludden, whom she eventually married, in 1963.
In 1973, she had a guest appearance on ‘The Mary Tyler Moore Show,’ playing Sue Ann Nivens.
She made her biggest hit show, ‘The Golden Girls,’ in 1985.
She had a supporting role in the monster film ‘Lake Placid’ in 1999.
‘Hard Rain,’ ‘Dennis the Menace Strikes Again,’ ‘Bringing Down the House,’ and ‘Return to the Batcave: The Misadventures of Adam and Burt,’ are among her other features.
She had a cameo appearance on ‘The Practice’ in 2004. She had a guest appearance on ‘The Oprah Winfrey Show’ in 2008 after appearing in ‘Comedy Central Roast of William Shatner’ in 2006.
In 2007, she starred in ‘TV Land Awards,’ and from 2005 to 2008, she was a regular on ‘Boston Legal.’ From 2006 through 2009, she was a regular on ‘The Bold and the Beautiful.’
In 2007, her love for animals was clear in the show ‘PetMeds.’
In 2008, she voiced Yoshie in the film ‘Ponyo,’ and in 2009, she participated in the film ‘The Proposal.’
In 2010, she featured as a guest on ‘Community’ and played a role in the TV comedy ‘Hot in Cleveland.’
In 2011, she starred in a promotional video for ‘Visit California,’ and produced a remix of her original song ‘I’m Still Hot.’
In 2013, she voiced a Mickey Mouse character, and in 2014, she appeared in the film ‘Soul Man.’ From 2012 to 2014, she hosted ‘Betty White’s Off their Rockers.’
She has hosted the television show ‘Betty White’s Smartest Animals in America’ since 2015. She’s also guest-starred in shows like ‘Crowded’ and ‘Young and Hungry,’ and has contributed her voice to a character in ‘SpongeBob SquarePants.’
‘Betty White: First Lady of Television,’ a documentary based on her life, was released in her honor in 2018. In the computer animated comedy film ‘Toy Story 4,’ she voiced the character of Bitey White.

She has three marriages under her belt. She married Dick Barker, a US military pilot, in 1945, but the marriage was short-lived. She married Lane Allen, a Hollywood agent, following that, but the marriage ended in divorce in 1949.
She married TV host and personality Allen Ludden in 1963, and the two were married until his death in 1981.
She has been awarded the title of ‘Kentucky Colonel,’ the highest honor bestowed by the Commonwealth of Kentucky.
White is a supporter and member of various animal welfare organizations, including the ‘Los Angeles Zoo Commission’ and ‘The Morris Animal Foundation.’ She’s written and published a number of books about her passion for animals and her work on television. For the audio recording of her book, ‘If You Ask Me (And of Course You Won’t),’ she got a ‘Grammy Award.’