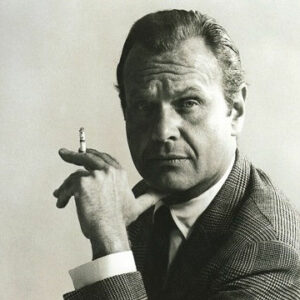 Bill Blass is often thought to be the first American designer of women’s clothes to also make clothes for men. He is known as one of the best fashion designers of the 20th century. His clothes were well-known among the most powerful women of his time because of the quality of the fabric, the designs, the way they fit, and the way the colors looked together. Some of the people who went to him often were Jacqueline Kennedy, Happy Rockefeller, and Marilyn Monroe. He wasn’t just good at making clothes; he also made a whole line of perfumes, luggage, and chocolates to grow his business. Not only that, but many car companies, including Ford, asked him to design their cars! Several times, he won the Coty Award, which is one of the most prestigious fashion awards, for his well-made casual, sports, rain, accessories, and evening wear. Even though he died 10 years ago, his designs and ideas are still very popular among people who care about fashion. Blass started designing clothes in the early 1940s, which were called the “unglamorous years” of fashion. He kind of changed the way people dressed at that time by bringing back cocktail dresses that had been out of style for a long time. High-society women loved the clothes he made for them, and soon they were setting fashion trends. Read the article below to find out more about this famous artist.

Blass was born to a salesman named Ralph Aldrich Blass and a seamstress named Ethyl Easter Keyser. When his father killed himself, he was only five years old.
From a very young age, he was very interested in fashion, and he would often draw sketches of the dresses that actors and models of his day wore in movies and magazines.

As he got older, he started sewing his own designs for evening gowns and selling them to dress companies in New York.
In 1939, when he was 17, he moved from the Midwest to New York to study fashion design at the Parsons School of Design.

After he graduated, he got a job as a sketcher for the sportswear company David Crystal.
During World War II, he joined the army in 1942 and was put in a group called “The Ghost Army.” This group was made up of creative people like writers, artists, theater workers, and others who would trick the German Army.

1945 was the end of the war, and Blass joined Anna Miller and Cio to start his career as a fashion designer. By the time Mrs. Miller retired as head of the company in 1959, he had become the company’s chief designer.
As the head designer of Anna Miller and Cio, which later became Maurice Rentner Ltd. after a merger, he came up with a number of very popular designs that helped him get a foothold in the fashion world.

After getting a lot of fame and money, he bought Maurice Rentner Ltd. in 1970 and changed its name to Bill Blass Limited. Over the next 30 years, he made some of the most beautiful clothes for women.

His clothes were worn by famous women like Nancy Davis Reagan, who was married to former U.S. President Ronald Reagan. Barbara Walters, a famous journalist, and Barbra Streisand, a famous singer and songwriter, both wore clothes from his line.

Over time, his brand grew to include swimwear, furs, luggage, perfume, and chocolate, among other things. By 1998, his company was making $700 million a year.
When he sold his business to Michael Groveman in 1999, he stopped working.

Ford Motor Company hired Blass to design the interiors and exteriors of its limited-edition “Continental Mark” series from 1976 to 1992. The “carriage roof” on the Mark series cars, which gave them the look of a convertible, was his most well-known design.

Blass won the Coty American Fashion Critics’ Awards seven times, which he was very happy about. The first time he won the award was in 1961, and the last time was in 1983.

In 1999, the Fashion Institute of Technology, a school of art, business, design, and technology that is part of the State University of New York, gave him a Lifetime Achievement Award for all he had done for the fashion industry.

In 2000, Blass was told he had oral cancer, which later spread to his throat.
He died in New Preston, Connecticut, when he was 79 years old.
He also wrote a book called “Bare Blass.” He finished it six days before he died.

Bill is one of the wealthiest Fashion Designers, and he is also on the list of the most popular Fashion Designers. Based on what we’ve found on Wikipedia, Forbes, and Business Insider, Bill Blass has a net worth of about $1.5 million.

This American fashion designer didn’t know how to drive, but he made a special line of cars for Ford Motor Company.