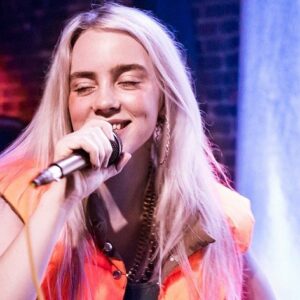 Billie Eilish is a singer and songwriter from the United States. Ocean Eyes, her successful debut hit, is her most well-known work. She was born and reared in the city of Los Angeles. She was bound to pursue a career in the performing arts because she came from a family of musicians. She joined a chorus when she was eight years old, and by the time she was eleven, she was creating and singing her own songs. Finneas O’Connell, her older brother, was the most influential person in her life as she grew up. He was a member of his own band and had created the song Ocean Eyes. Billie Eilish performed the song and made it available on the internet. It went on to be a huge hit. This proved to be her first significant breakthrough. Her brother assisted her in the recording of the single Bellyache in 2017. Billie released her debut EP, Don’t Smile at Me, in August 2017 as a result of the song’s success. The EP charted in various countries, including the United States and Europe. She was designated Apple’s newest Up Next artist in September 2017. In March 2019, she released her debut album, When We All Fall Asleep, Where Do We Go?, then in July 2021, she released Happier Than Ever.

Billie Eilish was born on December 18, 2001, in Los Angeles, California, as Billie Eilish Pirate Baird O’Connell. She was born into a musical and acting family. She shared her childhood with her older brother. Maggie Baird and Patrick O’Connell, her parents, were well-known characters in the American entertainment scene. She watched her older brother, Finneas O’Connell, fall in love with music as he grew up. Her mother also penned songs, and her father was a musician who played the piano and the ukulele. Little Billie was encouraged to pursue a career in music by the musical atmosphere in the family. She grew up listening to ‘Avril Lavigne’ and The Beatles’ music. Her father was a huge fan of recording mixtapes including various musicians. She was home-schooled for the majority of her childhood, but it didn’t stop her from getting involved in extracurricular activities. She enjoyed performing in home movies and singing and dancing whenever she had the opportunity.

Billie Eilish joined a choir when she was eight years old and sung with them for three years. She was already writing and composing her own songs when she was 11 years old. She also directed a number of short films. She shot them with a camera and edited them with Apple’s video-editing program, ‘iMovie.’ Dance was another of her passions, in addition to acting and music. She began taking dancing lessons when she was a young adolescent. She hoped to make a major career in show industry with her diverse set of skills. Her older brother has his own band. He’d created a song called Ocean Eyes and requested that his sister record it in her voice. This unintentional hit became Billie’s breakthrough hit, propelling her career forward.

Ocean Eyes was written and recorded in November of 2015. It was intended for Billie’s dance courses at first. She gave the music to her dancing teacher with the intention of include it in her next dance routine. The song turned out to be excellent, and the siblings agreed that it ought to be shared on the ‘SoundCloud’ music-sharing platform. The song was released in November 2015 on ‘SoundCloud,’ and the music video was released in March 2016. In November 2016, it was commercially re-released. In a short amount of time, the song went viral, receiving over 10 million views. This surprising success paved the way for a slew of new variations. Billie danced on the song in a music video released in November 2016. It was another another resounding triumph. Several major record labels expressed interest in purchasing the song’s rights. ‘Darkroom’ and ‘Interscope Records’ distributed the song internationally. It was an immediate critical and commercial triumph. Billie Eilish released another single, Six Feet Under, at the conclusion of the year.

Billie Eilsih was inspired by the success of her debut single, Ocean Eyes, and created four remixes of the song, which she collected into an EP titled Ocean Eyes. All of the remixes were huge hits, giving Billie the confidence to pursue her other ventures. Billie Eilish released the tune Bellyache in February 2017, which was produced and co-written by her brother. Miles and AJ directed the song’s music video, which was released in March 2017. After that, Billie Eilish released a song called Bored, which was featured on the official soundtrack of the popular Netflix series 13 Reasons Why. Following that, two additional singles, Watch and Copycat, were released. Billie released her highly anticipated debut EP, Don’t Smile at Me, in July 2017.

Billie Eilish released two singles from the EP before it was officially released: My Boy and Idontwant tobeyouanymore. She added fresh tracks every Friday leading up to the EP’s release. On August 11th, 2017, the EP was finally published. She teamed with Vince Staples and released a remix of her song Watch, called &Burn, the same year. She went on two headlining tours to promote herself: the Don’t Smile at Me Tour in October 2017 and the Where’s My Mind Tour in February-April 2018. She also teamed with Khalid, a well-known American musician, on a song called Lovely, which was released in mid-2018. The song was so successful that the producers of 13 Reasons Why decided to buy the rights to it and include it in the second season of the show. Billie Eilish’s singles Bitches Broken Hearts and You Should See Me in a Crown were released in 2018. She subsequently released a track called When the Party’s Over and was named to Forbes’ 30 Under 30 list later that year.

On March 29, 2019, her long-awaited debut album, When We All Fall Asleep, Where Do We Go? was released. The album reached number one on the Billboard 200 and the UK albums charts, making her the first millennial to do so in the United States and the youngest female to ever have a number one album in the United Kingdom. She was set to embark on the Where Do We Go? World Tour in September 2019, but it was postponed owing to the Covid-19 epidemic. In January 2020, she sang the title song for the 25th James Bond film, No Time to Die, which her brother wrote and produced. Happier Than Ever, her second studio album, was released on July 30, 2021 by Darkroom and Interscope Records. Her second album also charted at number one on the Billboard 200 and the UK album charts.

In the year 2020, Billie Eilish became the youngest person to be included in Forbes’ Celebrity 100 list. She has seven Grammy Awards, two American Music Awards, and one BRIT Award to her belt. Billie Eilish is the first female musician to win the Grammy Award for Album of the Year. In 2020, she won for her album When We All Fall Asleep, Where Do We Go?

Billie Eilish has been chastised for her inability to smile in pictures. In response to such criticism, she has stated that she dislikes smiling because it makes her feel vulnerable and powerless. She is well-known for her outlandish fashion style. She is frequently chastised for it, but she pays little mind to the criticism. Tourette syndrome and synaesthesia have been diagnosed in Billie. She has admitted that she, too, has struggled with depression. Billie Eilish once dated rapper Brandon Adams, also known as 7:AMP.She was accused of queerbaiting in order to promote her music, and she was made a target of cancel culture for using an anti-Asian slur. She has apologized profusely for both charges on social media.