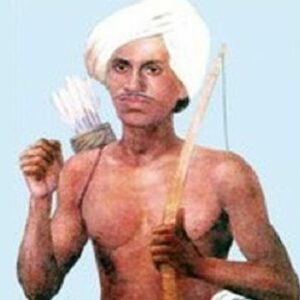 Birsa Munda was a tribal leader and Indian freedom fighter who led a revolt against British rule. He was a visionary who played a key role in freeing his people, the tribal people, from the cruel and exploitative policies and actions of the British government. When he was a young boy, he moved from place to place looking for work. This gave him an idea of what the community was going through because of British rule. When he realized that the British company had come to India to torture the people and steal their money, he started spreading information to show what the British were up to and gathered an army of tribal people to fight them. The army fought back against the unfairness and betrayal of the British Raj with movements and protests. He took part in the rebellion and is remembered as a fierce fighter who had the courage to fight the British. He also said he was sent by God and told his followers to follow the idea that there is only one God. His powerful personality and inspiring speeches inspired people to believe in the power of freedom and dream of a better world than the one they were living in. His work to give tribal people back their full ownership rights showed his leadership and vision.

On November 15, 1875, he was born in Ulihatu, Khunti, Jharkhand, India, to Sugana Munda, a farm worker, and Karmi Hatu, his wife. He was one of his family’s many children. Komta Munda was his older brother, and Daskir and Champa were his older sisters.

His family was part of an ethnic tribal group called the Munda. They moved around a lot before settling in Chalkad, where he spent his early years. He was interested in playing the flute from a young age.
Because he was poor, he spent two years in the village of his mother’s uncle, Ayubhatu. After his mother’s younger sister Joni got married, he also went with her to her new home in Khatanga.

He went to a school in Salga that was run by a man named Jaipal Nag when he was young. Jaipal Nag told him to go to German Mission School because he was a smart student. So, he became Birsa David and became a Christian. He then signed up for school. He went to school for a few years before deciding to quit.

From 1886 to 1890, his family lived in Chaibasa, a place where the Sardars’ actions had an effect. He was swayed by the activities and encouraged to join the movement against the government. In 1890, his family moved and quit the German mission in order to help the Sardar’s movement.

Later, he joined the people’s movement against the unfair laws that took away the Mundas’ traditional rights in the protected forest in the Porhat area. At the beginning of the 1890s, he started telling ordinary people about the plans of the British company to take over all of India.

He became a good leader and fought back against the problems of agrarian collapse and cultural change. Under his direction, the tribal movements grew stronger, and many protests against the British were held. The movement showed that the land really belonged to the tribal people and called for the middlemen and the British to leave.

After his sudden death, the movement died out over time. But it was very important because it forced the colonial government to make laws so that the dikus couldn’t easily take the land of the tribal people (outsiders). It was also a sign of how strong the tribal community was and how brave the tribal people were to stand up to the racism of the British Raj.

While he was living near the village of Sankara in Singhbhum, he met a good person to marry. However, she cheated on him, so he left her. Later, two women asked him to marry them: the daughter of Mathura Muda of Koensar and the wife of Jaga Munda of Jiuri. He turned down both of them, though.

On March 3, 1900, he and his tribe’s guerrilla army were caught by British troops in Chakradharpur’s Jamkopai forest.
He died in Ranchi Jail, where he was being held, on June 9, 1900. He was 25 years old. Even though he had no symptoms of cholera, the British government said he died of it. This led to rumors that he might have been poisoned.

Several schools, colleges, and other places are named after this revolutionary to honor him. Birsa Institute of Technology, Birsa Agricultural University, Birsa Munda Athletics Stadium, and Birsa Munda Airport are some of the most well-known.

Birsa Munda’s estimated net worth is $10 million, and revolutionary is his main source of income. We don’t know enough about Birsa Munda cars or their way of life.