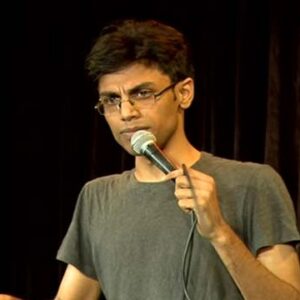 Biswa Kalyan Rath is a YouTuber and stand-up comedian from India. Stand-up comedy is the hottest new thing in Indian entertainment, and stand-up comedians are springing up all over the place these days. However, only a handful have managed to capture the audience’s attention thus far, and Biswa Kalyan Rath is one of them. His claim to fame is his funny take on reviewing Bollywood films alongside Kanan Gill, a fellow stand-up comedian. Biswa co-founded Pretentious Movie Reviews alongside Kanan, which has become a cult YouTube destination for Bollywood movie fans all over the world. He’s now moved on to other projects, such as starting his own YouTube channel and cooperating with other online streaming platforms to promote his own brand of comedy. He’s had a YouTube channel since 2008, but he only started uploading regular videos in 2015, after he became well-known as a result of his Pretentious Movie critiques. He’s on Twitter, where he’s known for his weird one-liners, and he’s also on Facebook.

Biswa Kalyan Rath was born in Bhubaneshwar, Orissa, to a middle-class Oriya family. His father was a State Bank of India employee who was transferred to new sites every two years, therefore he spent his childhood moving all over the state from cities to towns to villages.

He attended several schools in Odisha, where he later drew inspiration for his hilarious stuff.
Biswa traveled to Vishakhapatnam after finishing school to study for the IIT entrance exam at one of the city’s coaching institutions.

He eventually passed the IIT-JEE exam and was accepted into IIT Kharagpur. He earned a degree in Biotechnology from IIT Kharagpur.

Biswa aspired to work in a creative profession after college, so he began working as a graphic designer in Bangalore. He later went to the same location to work for Oracle in a software position.

Biswa was discovered by Fame.

He became interested in stand-up comedy while working in Bangalore and attending a writer’s workshop. Biswa began visiting several comedy shows throughout the city, eventually building up the nerve to participate in open mic stand-up comedy events.

He spent the following several years honing his material and honing his people skills at various events around Bangalore, which already had a thriving stand-up comedy scene. He met his future field partner, Kanan Gill, at one of these events, and the rest, as they say, is history.

They agreed to get together and work on something different, and they landed on producing highly amusing parodies of stereotyped Bollywood films from the 1980s and 1990s.

It was just two guys taking turns watching awful movies and discussing their many parts with incredibly entertaining commentary. Their rants were frequently interwoven with specific passages from the film, which helped them hammer home their points.

They used specific ‘Best (Something) Ever’ taglines to highlight the fundamental hilarious element they were striving for in each film. It was effective, and it was effective in a major way. The Pretentious Movie Reviews episodes went viral on YouTube and were also shared and re-posted on other social media sites.

Each series of Pretentious Movie Reviews has had over 2 million views, with the most popular being the one for ‘Prem Agan,’ which has received close to 3.5 million views. Disco Dancer, Dilwale Dulhania Le Jayenge, and Rudraksha are among his other ‘Pretentious Reviews’.

Biswa has seldom made any more Pretentious Movie Review episodes since his stardom, preferring to focus on his own stand-up comedy career.

In September 2015, he embarked on his first solo tour. ‘Biswa In Your Face’ was the title of his tour, which took him to cities like Bangalore, Mumbai, Pune, Hyderabad, and Kolkata. He’s also worked on multiple projects with stand-up comedy legend ‘All India Bakchod,’ or AIB.

Biswa’s sense of humor is really wry, and it has to be mentioned that it isn’t for everyone. He has the appearance of a classic geeky software developer, replete with thick specks and a lanky body.

His appearance lends him a singularly solemn demeanor, which serves as a ready prop when he is busting up the crowd with hilarious gags while remaining as straight-faced as ever.

He doesn’t employ the pregnant pauses that are so popular among stand-up comedians, and his delivery is clear and straightforward. His kind of stand-up comedy reflects the simplicity of his personality well, and this has endeared him to the crowd in particular.

Biswa is the only well-known comedian from the state of Odisha, and through his work, he gives viewers a rare peek into the life of ordinary Oriya men.

He also feels socially accountable, as he frequently delivers moving pieces on current and pertinent societal concerns such as despair and adolescent suicide.

Following the news of a young man’s death in Mumbai, Biswa turned to Facebook to discuss his own nine-year fight with depression, as well as the eight lessons he has learned during that time. He is well aware that he is currently a youth icon, and he is not hesitant to use his position to help them.

What to Be Aware Of

Only Much Louder (OML) has signed him to this comedy endeavor, along with 14 other top stand-up comedians from India, and it will be available exclusively on Amazon Prime Videos in 200 countries around the world.

Biswa’s section is called “Biswa Mast Admi,” and he is exclusively responsible for the content of his programs.
Although Pretentious Movie Reviews are now on pause, Biswa and Kanan have promised YouTube subscribers that they would return with one soon.

Biswa Kalyan Rath, a well-known comedian, has a net worth of $5 million.